The race to Android 5.0 (Lollipop) has been one which has been ongoing for months now. While most of the major flagship devices have been updated and have actually begun to move on to their next incremental Lollipop upgrades, a number of devices have still not received their update. What's more, is that as times goes by, it is looking more unlikely that some of those 'still waiting' devices will receive the update at all. In terms of the Samsung Galaxy Note 2 and the Galaxy S3, it now seems that they will not be receiving the Lollipop update. That is, in the UK at least.

A tweet sent out by Samsung Mobile UK over the weekend has now largely confirmed that neither the Galaxy Note 2 or Galaxy S3 will receive the update. This was not an official confirmation but instead a reply sent out on twitter to a customer query regarding the updating of the two devices. As you can see from the image below, the reply simply states that Samsung do not like to give out bad new, but neither of the two devices will be receiving the update.

Although the tweet does not confirm whether this is a UK only decision or will be apply to other regions, the last couple of weeks and months have seen a number of reports coming through stating that the devices will receive the update. In particular, the Galaxy Note 2. Owners in Poland may remember that in February an update from their Samsung branch confirmed the inbound update would happen for the Note 2. While, much more recently, in May, Samsung Denmark also confirmed the roll out of Lollipop to the Galaxy Note 2, but also suggested that the Note 2's eligibility for the update would be based on a "market to market" basis. As such, in seems that the UK side of Samsung is next in line (following on from Samsung Gulf) to declare that the Note 2 will not receive its update. As such, if you live in the UK and own either the Note 2 or Galaxy S3, then it seems that you are unlikely to receive the update anytime soon. 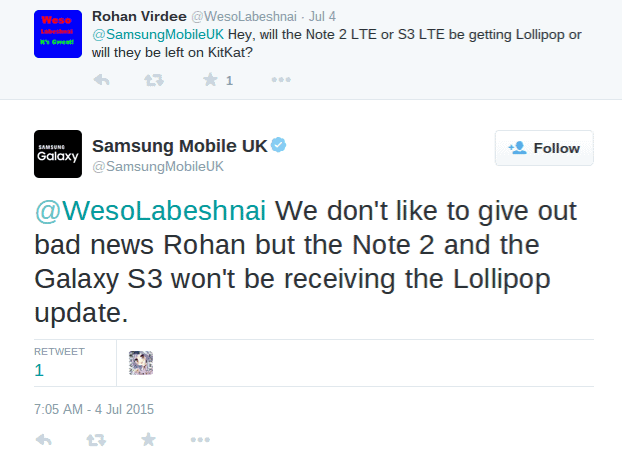