Ok, so most of us Android users likely use Google drive, and we most likely really enjoy using Google’s cloud storage service. However, one can’t help but admit that Google’s Docs, Sheets, and Slides services, whether web or app based, are miles behind the editing and creation utility offered by Microsoft’s Office suite of applications despite their recent improvements. While Docs, Sheets, and Slides are good enough for most situation sometimes you just have to use native Office. Rather than blindly push users of Drive to utilize Google’s own services, the company has just released a plug-in for Microsoft Office that integrates Drive’s cloud saving and opening functionality in a similar fashion as One Drive, Microsoft’s homegrown cloud storage service.

Last November Google rolled out a feature that gives users the ability to open files, such as Office docs, in native application from Google Drive. The new plug-in builds on this functionality but works in reverse. Instead of going to Drive then opening a Word document in Word, the plug-in allows you to go straight to Word etc. and open Drive files directly from it. Once you have finished editing the file you can save the changes you made back to the file stored in Drive once you are done. Unsurprisingly, if you have created a document, spreadsheet, or presentation directly from Office, the file can also be saved to Drive directly from Office. Until now One Drive was the only service that afforded Office users these comprehensive baked in cloud storage features, it is nice to see Google Drive match One Drive toe to toe in terms of Office integration.

This new strategy from Google is ingenious. Some people, whether for functional or just plain familiarity reason prefer to use Microsoft Office rather than Google’s services. For these users, it made much more sense just to use OneDrive rather than Google Drive for cloud storage because it is simply more convenient. Until now you had to hunt down your file in Drive, download it, open it, edit it, save it, then upload the new file back to Drive. The new plug-in drastically simplifies this process, which should make Google Drive a much more appealing option for Office users, who are a very large base Google would do well to keep or attract. Regardless how much improved Google’s productivity services have gotten their strength lies in openness, cross-platform support, and integration. 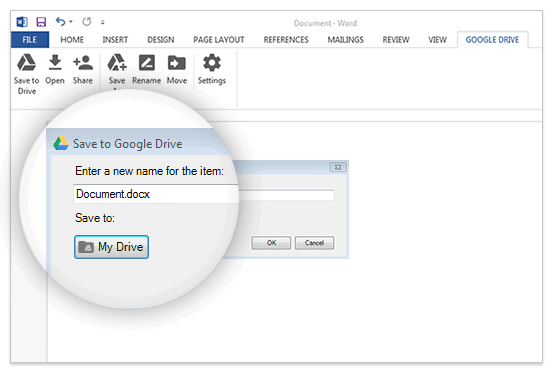