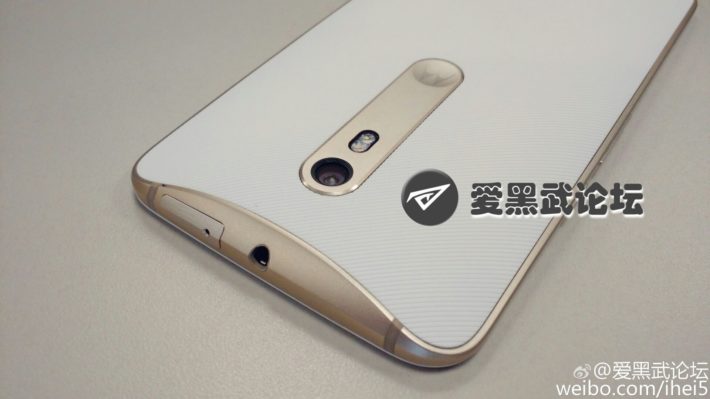 Motorola has scheduled an event for July 28th, where the company will, presumably, announce the new Moto X and Moto G devices. The arrival of either of these two devices haven't been confirmed just yet, but the cmopany will almost certainly announce at least one of the two. Both of these smartphones have been leaking all over the internet in the last couple of weeks, and leaks have intensified in the last week or two. All of this points to the fact that both devices might arrive in just couple of days.

That being said, another leaks popped up, this time we have a new alleged Moto X image to share with you. This image doesn't really reveal all that much considering we get to see only the upper back portion of the device, but it goes hand-in-hand with the previously leaked content. As you can see, this is the White and Gold variant of the device, it sports a white back cover and the Gold-colored frame and accents. You also get a good look at the phone's rear-facing camera and the dual-LED, dual tone flash below it. The 3.5mm headphone jack will be located on the top of this device, and the SIM tray seems to be placed up there as well.

What specs will the third-gen Moto X sport? Well, according to a number of leaks, Motorola's newest flagship will feature a 1080p or QHD display which will be somewhere between 5.2 and 5.5-inches big. The Snapdragon 808 is the latest SoC which was mentioned to power this thing, though the Snapdragon 810 was also mentioned in the past. The device will ship with 3 or 4GB of RAM, and a 16-megapixel camera will quite probably be located on the back of this device. The 5-megapixel shooter will reportedly be available up front, and the side bezels will be quite thin on this thing, at least according to the leaks thus far.

Speaking of leaks, check out the latest batch of Moto X (2015) images. It is also worth mentioning that the Moto X Sport variant has also been mentioned quite recently, so it remains to be seen what will Motorola announce on July 28th event, stay tuned.