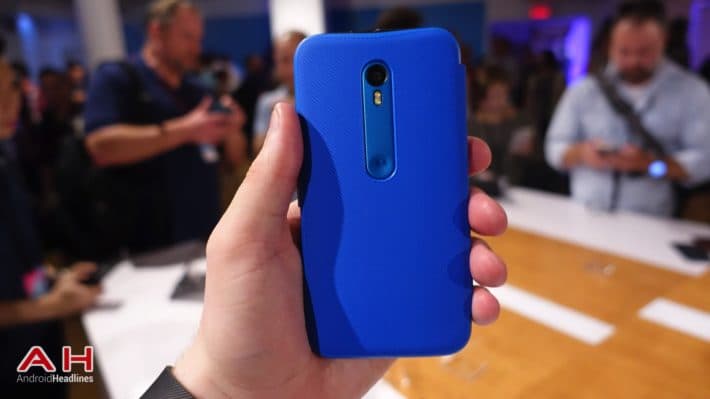 Let's take a quick trip down memory lane. In November of 2013, Motorola took the stage in Brazil to announce a new smartphone. One that would ultimately become the company's best selling smartphone ever. A smartphone that was "cheap" but didn't really have any compromises. That was the original Moto G. And was also part of that first product cycle of the – then – Google-owned manufacturer. Hard to imagine that we are now on our third generation of this product. Last September, we made the trip over to Chicago to see what Motorola had that was new, which included the Moto X 2014, Moto G 2014, Moto 360 and Moto Hint. At this point, Google had signed the paperwork to sell Motorola to Lenovo, however that deal would not be finalized until late October of 2014.

Now here we are in the middle of the first product cycle by the now Lenovo-owned Motorola Mobility. This past Tuesday, the company announced a few devices for 2015, which included two Moto X models (the Moto X style – known as the Moto X Pure in the US – the Moto X Play and the Moto G 2015). The Moto G 2015 was made available the day it was announced, and it starts at $179 without a contract. While the Moto X Style, Pure and Play will be launching in September.

The Moto G has been positioned as Motorola's mid-range device, with a mid-range price. While the 2nd generation model that was announced last year didn't really have a huge difference compared to the original. In fact, the original Moto G didn't have LTE when it launched, however an LTE model launched a few months later. The 2nd gen Moto G did not get an LTE model at all. That's one of the things that was added in the third generation Moto G here. We have 4G LTE which works on AT&T and T-Mobile. We also have a slightly larger battery this time around. Motorola has tucked in a decently sized 2470mAh battery. That's an upgrade from the 2390mAh battery in last year's model. While that may not seem like a huge upgrade, it's a bit more juice to get you through the day. I don't think we'll complain about that.

Motorola has also upped the RAM on one of the Moto G models. To clarify, this year they are offering a 8GB model with 1GB of RAM, a 16GB model with 1GB of RAM and a 16GB model with 2GB of RAM. Obviously the 8GB model starts at $179. Something else that Motorola has added to the Moto G this year, is Moto Maker. Previously, you could buy the Moto G through Motorola and get different back covers – as they are removable – but now you can choose you back color, the front, the accent color, the storage and even engrave it. Pretty neat right?

I've spent a few days with the Moto G 2015, basically since Tuesday, and so far I'm a bit impressed. Now as much as Motorola talked up the camera – albeit the same sensor as the Nexus 6's – it still doesn't live up to what I'd want out of the camera. Unfortunately. It's great in outdoor conditions as well as with good lighting (i.e. at the hands on area at Motorola's event in NYC), but when it comes to low light images, it's pretty bad. Now, I will say that these are "beta" versions of the Camera, Moto and Connect apps (Motorola is actually using the Google Play Beta system), so it could get better. But I wouldn't hold out a ton of hope on that. You can check out this picture I took in low-light, but not super low-light, conditions. As you can see, the white balance is pretty far off, unfortunately.

I have to say, that is probably the only issue I have with the Moto G. In day-t0-day tasks, it performs quite well. Also in gaming it does pretty well. It's also worth noting that we have a 16GB of storage and 2GB of RAM model, which is around $219 from Amazon, Best Buy and Motorola.com. The Moto G fits the hand perfectly, and the material used on the back which is textured a bit. It's not the same as the silicon used on the Moto X Style however, but it does look similar. Motorola has made it easy to reach the power and volume rocker, which has been an issue for some Android OEM's this year.

Battery life has been pretty decent, the first day was a bit tough to gauge seeing as I was in NYC and using the device quite heavily. But over the past few days it's gotten much better as things have begun to settle in. Motorola advertises 24-hour battery life. I'm not sure you'll get 24 hours exactly, but it should get most of us through the day. However that also depends on what you're doing with your device, as always.

Now we can't forget, perhaps the biggest part of the Moto 2015. And that's the fact that it is water resistant. Rated at IPX7, it can withstand up to 1 meter of water for 30 minutes. Now this isn't new, as Sony has done it for years, and Samsung did it last year with the Galaxy S5, and their Galaxy S Active series. But to see it on a phone that costs under $200 is pretty crazy. Motorola has also made it more durable, however we will not be filming a drop test for the Moto G unfortunately.

All in all, I think Motorola have hit the Moto G out of the park, once again with the Moto G. While many feel that the Moto X is their flagship, the Moto G is almost more important for the company as they sell a whole lot more Moto G's than Moto X's, and that's largely due to the availability as well as the pricing. At $179 (or $219 for the 16GB version), it's hard to find a better bang for your buck. Right now, there's some pretty steep competition in the smartphones for under $250 right now. Including the Alcatel OneTouch Idol 3, ASUS Zenfone 2, and the Moto G 2015. All of which any of the editors here at Android Headlines would recommend.