Bits and pieces of Meizu MX5 have been leaking all over the internet for months now, and the company has finally announced this handset yesterday. We’ve covered the launch of Meizu’s new flagship at length already. This China-based company did a really solid job once again, the Meizu MX5 is a direct successor to the MX4 which was released in September last year, and it brings high-end build and specs, while keeping its price relatively low. Anyhow, we’ve covered many aspects of this device, and we’ve even managed to get some hands-on time with the device considering we were present at the event. That being said, we’ll put the MX5 through its paces, and you can expect a review soon.

During the conference, Meizu talked a lot about the Meizu MX5, which was the main release of the day. The company has even showed off MX5’s AnTuTu benchmark results during the conference in order to showcase the power of MediaTek’s Helio X10 (MT6795) 64-bit SoC which powers this device. The Meizu MX5 scored 53,330 on AnTuTu, which is significantly more compared to its predecessor which managed to hit an average of 47.765 last year. We all know that benchmarks are not exactly the best way to determine how well the device will perform, but they do show how powerful the hardware is though.

The Meizu MX5 features a 5.5-inch 1080p (1920 x 1080) Super AMOLED display along with 3GB of RAM and 16, 32 or 64GB of in-built storage. This handset is powered by MediaTek’s Helio X10 64-bit octa-core SoC, and the 3,150mAh battery is also a part of this package. The 20.7-megapixel snapper is located on its back (LED flash and Laser Autofocus included), while you’ll find a 5-megapixel shooter on the phone’s front side. Android Lollipop comes pre-installed on this handset with Meizu’s Flyme 4.5 UI available on top of Google’s OS. Dual-SIM and 4G LTE connectivity are also available here, and the phone is made out of metal. mTouch button (home button / fingerprint scanner) and mCharge (fast charging) features are also available as part of this package. It is also worth mentioning that this handset is only 7.6mm thick, and that it weighs 149 grams. 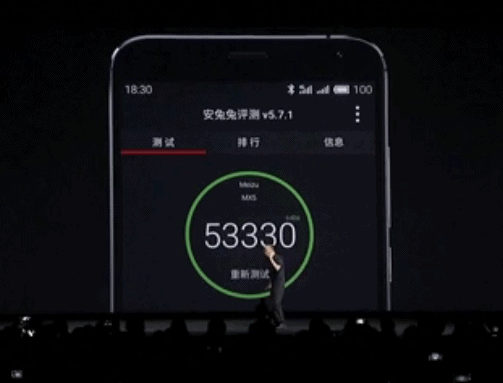