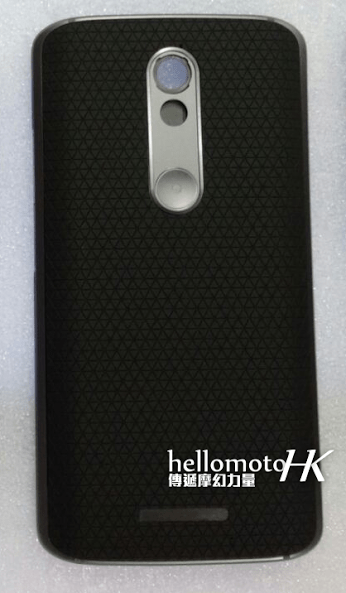 A leaked image has recently surfaced on the web which is suggested to be the back of an upcoming new DROID device from Motorola. There have been various leaks regarding Motorola's upcoming replacements for the Moto X and Moto G devices for 2015, both of which have had similar looking designs. This new leak looks fairly similar albeit with a slightly different texture design on the back in comparison to what look like leaked press renders for the 2015 Moto G back on July 10th. Although the textures are slightly different, the back appears similar in design to prior Motorola leaks, including the bar that travels down the middle of the device which houses the camera, flash, and indent for the Motorola batwing logo.

While the leaker known as Hellomoto HK claims this to be the back of a new DROID device, comments in the reddit thread where this leak was posted seem to agree that this still looks more like an upcoming Moto X, which would make more sense given the similar design to the renders for the Moto G 2015. One user suggests however that this could still be ballistic nylon and that Motorola may be having this option as a customizable back plate for the upcoming Moto X device alongside other options in Moto Maker. Keep in mind that all these leaks and suggestions are just rumors at this point, and nothing has yet been confirmed by Motorola. It's also obvious that if this leak is in fact of an upcoming DROID or Moto X, that the device is more of a prototype than a finished product, which is evident by the lack of a flash where the flash should be sitting under the camera, and the dimple where the logo should be is clearly not present.