Current smartphones can do almost anything today, from surfing the web to take high-quality pictures from the cameras which have been greatly improved in recent times, but for devices that we use every day, there are still some areas that could be improved. One of them is battery life, because displays are getting larger but the phones are getting thinner, so the compact batteries run out of power sooner because of the more power-demanding screens, anyway, some smartphone makers are already thinking about solutions. Another issue with smartphones is that they are very fragile, it might take a drop from the chest height to break the glass covering the screen or damaging other components and while there's a small percentage that can resist water, the rest would stop working after being submerged into any liquid.

The Japanese company Kyocera has created some devices that would hold up some extreme situations with their Torque lineup and now, the company will release two rugged smartphones with the Japanese operator KDDI. The first one carries the Torque branding and the model is the G02 (pictured above), it has 19 certifications from the United States Military Standard (MIL-STD-810G) and two more proprietary tests. Interestingly, it can be used under seawater, being the first one to do so, as every other smartphone that can be used under water specifies that the certification only covers fresh water. The camera has a special mode to be used under water and the phone includes some sensor-based apps to be used while surfing, hiking and climbing, running and walking and another one to be used while camping. The company states that the screen can be used when it gets wet or when using gloves and it features Dragontrail X glass to protect it. The front facing speakers are really loud to be heard at long distances and it features a large programmable button on the side, plus, the screen vibrates to create sounds with the so-called Smart Sonic Receiver technology. The rest of the specs are not so impressive, the screen measures 4.7 inches and it has HD resolution, it includes a Snapdragon 400 processor clocked at 1.4 GHz with 2 GB of RAM. The 16 GB of internal memory can be expanded with a MicroSD card.

The other smartphone is the Urbano V02 (pictured below), which is still certified by the United States Military Standard (MIL-STD-810G), so it can be used in all sorts of environments, but it is targeted to consumers who care about having a sleek design on their pockets. It also features the Dragontrail X glass to protect its screen and Smart Sonic Receiver technology. The included apps are targeted towards users who are not used to modern smartphones, so it features a simplified Home screen and the keyboard can look like the one in older phones. It features a relatively slim profile at 8.2 mm and its construction includes a metallic back. The HD screen measures 5 inches, but the rest of the specs are very similar to the other phone. Both of them run Android 5.1 and they will be available tomorrow from the aforementioned carrier. 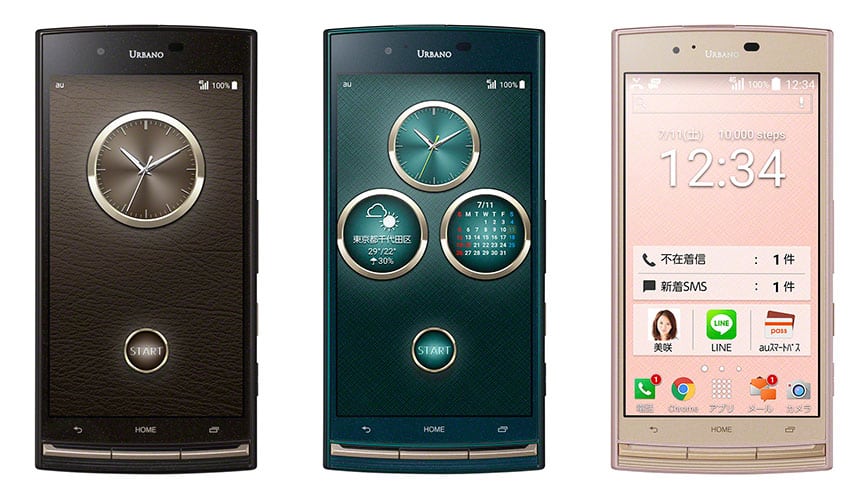 Sponsored Video
Advertisement
Trusted By Millions
Independent, Expert Android News You Can Trust, Since 2010
Publishing More Android Than Anyone Else
15
Today
15
This Week
195
This Month
1469
This Year
111570
All Time
Advertisement