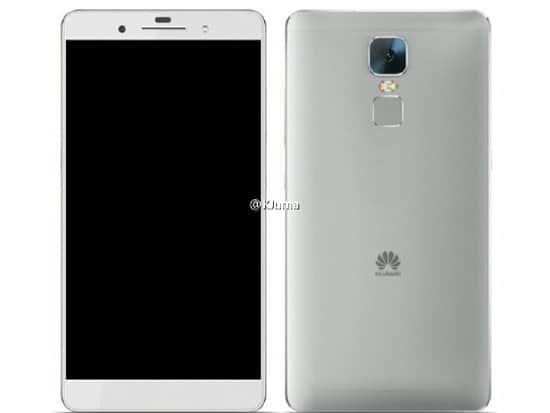 Huawei has pushed out a number of compelling devices to the market this year. This Chinese smartphone OEM has released their flagship P8 line of devices a couple of months ago, including the company's flagship smartphone and phablet, Huawei P8 and P8Max. The mid-range Honor 4C handset followed soon after that alongside two entry-level tablets. Huawei has also released the much-rumored Honor 7 smartphone about a week ago, this is yet another premium metal offering by this China-based smartphone OEM. That being said, many people are waiting for Huawei to release the Mate 8 later this year, and we finally have some info regarding this phablet.

We've seen some Mate 8 leaks in the past, but we haven't heard anything about this device for quite some time now. Well, an alleged Mate 8 render leaked, and as you can see in the provided image, the device will once again be made out of metal and sport really thin side bezels. The fingerprint scanner will be located on the back of the device, just like it was the case with its predecessor. The dual-LED, dual tone flash is also quite visible, and the camera sensor on the back looks quite big, we're probably looking at a 20.7-megapixel snapper by Sony (IMX230). The Huawei Mate 8 is said to sport a 6-inch 1080p or QHD display along with 3 and 4GB of RAM (2 versions will be available). The 3GB variant will quite probably ship with 32GB of internal storage, and the 4GB model will come with 64GB of in-built storage. The 20.7-megapixel shooter is said to be located on the back of this phablet, and an 8-megapixel snapper will be available up front.

It is quite possible that Huawei's HiSilicon Kirin 950 64-bit octa-core SoC will power this thing. Speaking of which, Kirin 950 specifications actually leaked yesterday, so check that out if you're interested. The Kirin 950 is quite a powerful chip which can be clocked up to 2.4GHz, and it also offers Cat.10 LTE connectivity, and comes with Mali-T880 GPU for graphics. There you have it, the Ascend Mate 7 launched back in September 2014, and the Mate 8 will probably arrive in September this year. Stay tuned for more info, we'll report back as soon as something pops up.