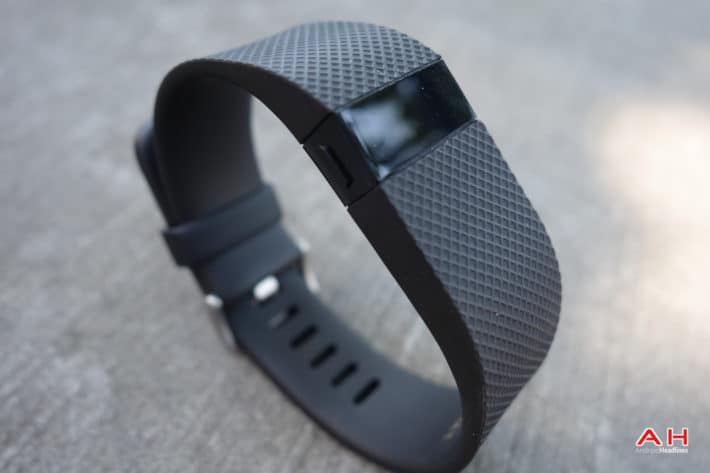 When it comes to activity trackers, Fitbit is easily one of the most well-known brands in the space. Recently we reviewed the Fitbit Surge which is Fitbit's GPS Watch. Think of it like a fitness/activity tracker with smartwatch like tendencies. It's got a nice range of features and was pretty comfortable to wear throughout the day. The Surge is Fitbit's current top of the line, but not everyone will want those kinds of features and may just prefer something a little less equipped, not to mention there is a difference in price which will affect some people's decisions when paired with the functionality they're looking for. This leads us to the Fitbit Charge HR, the activity tracker from Fitbit which is a step down from the Surge and takes more of a focus to just the fitness and activity tracking capabilities. Since the Charge HR is fairly similar to the Surge though, this review won't be as in-depth, as many of the features and capabilities are the same between the two save for a couple of key functions on the Surge. 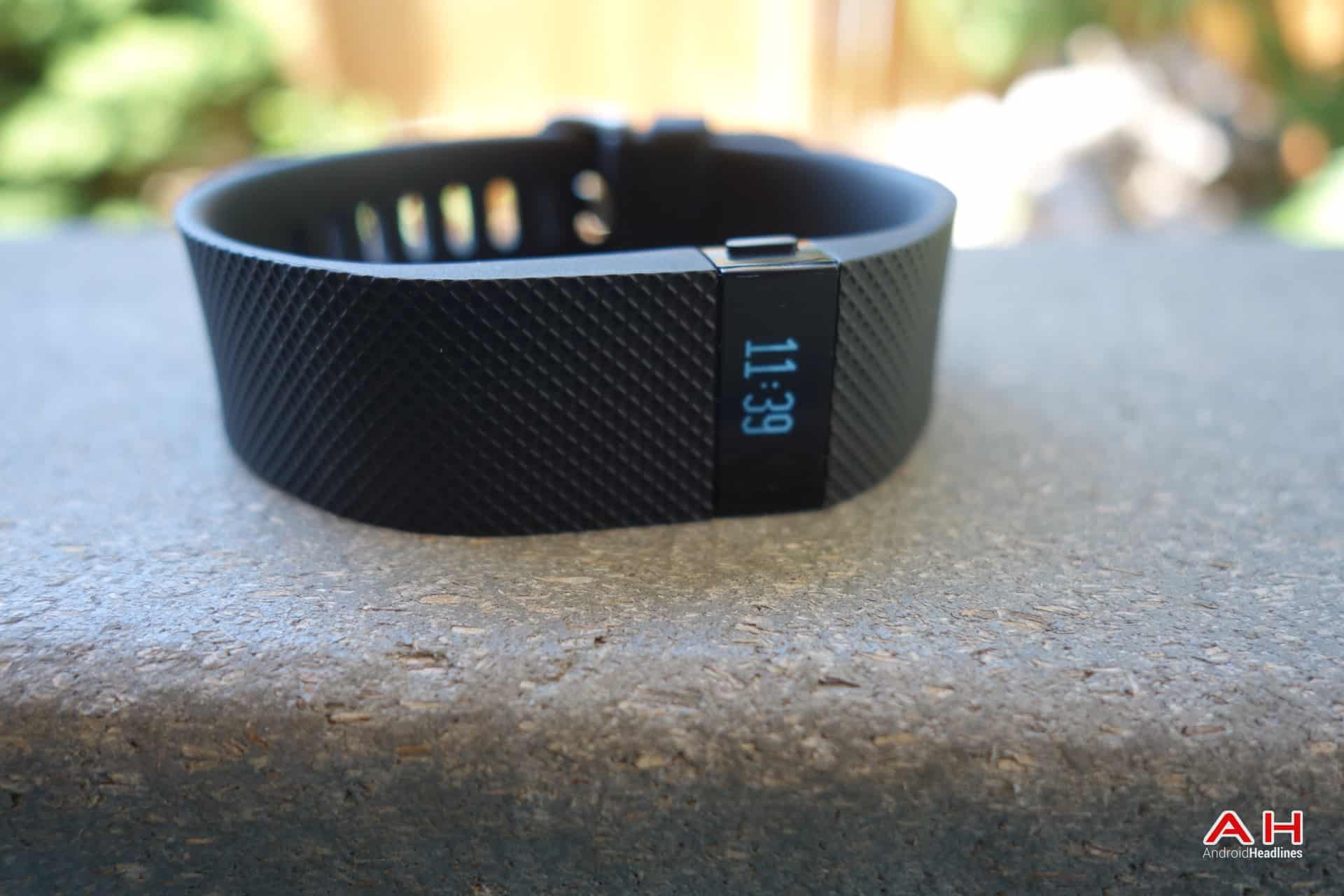 The Charge HR may be a bit of a step down from the Surge, but it is by no means lacking in features. In comparison to many other activity trackers, the Fitbit Charge HR is just as capable, offering things like the heart rate sensor on the back to record your heart rate, a tiny LCD display for displaying the time/clock as well as steps and calories burned. Save for the GPS tracking and the music controls, the Charge HR features just about all the same things as the Surge that make it a contender for one of the best activity trackers. It has the PurePulse heart rate sensor which continuously tracks your heart rate throughout the day, which again, is great for people who don't want to have the hassle of initiating the process for the device to track your heart rate. The heart rate sensor is always on and always working if the Charge HR is powered on, so you can simply wear it, and forget about it. If you're curious to know what your heart rate is at any given time, all you have to do is hit the single button that sits on the left side of the band and it cycles through all the things it tracks. Hitting this a few times will bring up your current heart rate. 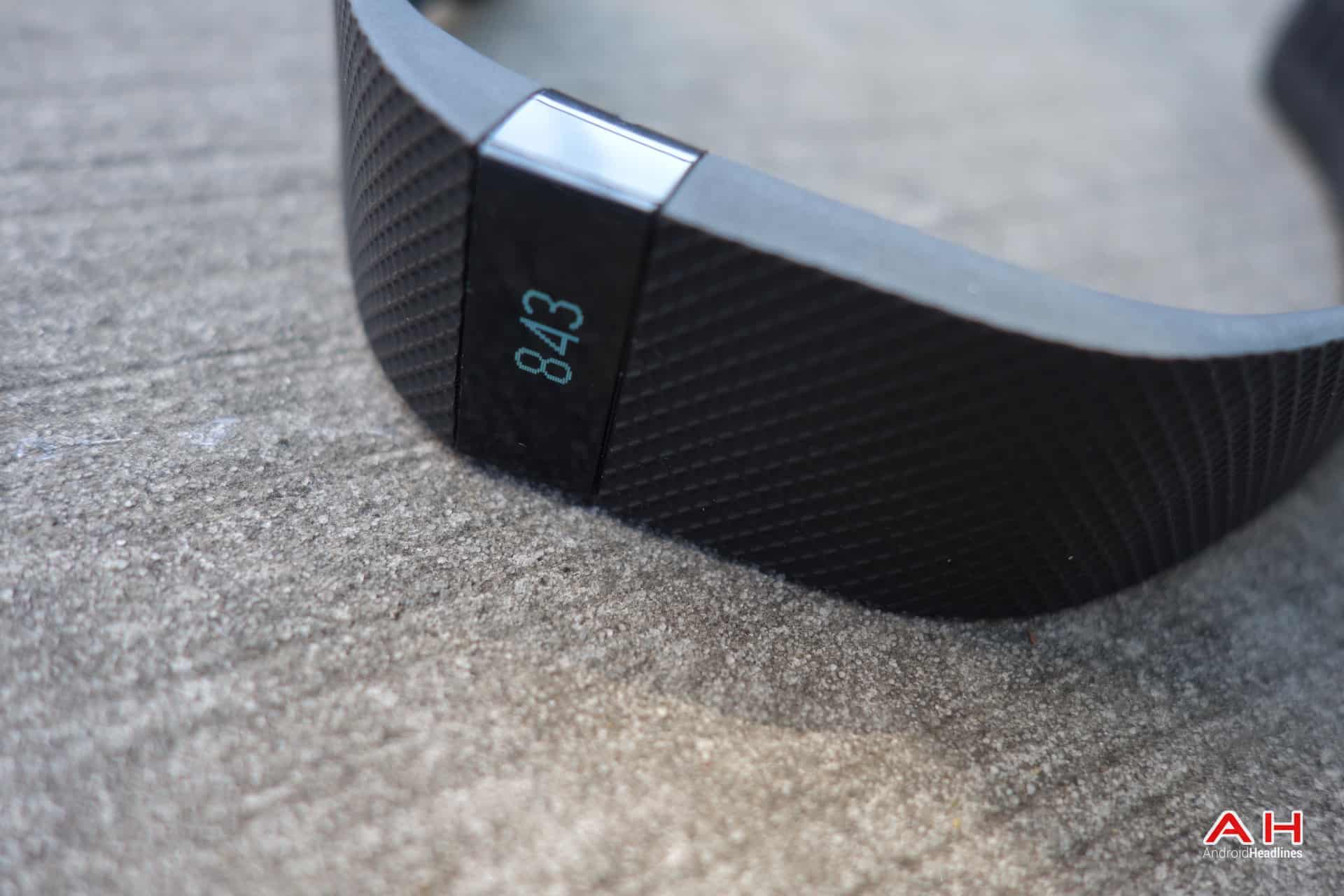 As with the Surge, the Charge HR also tracks your steps as you walk throughout the day, and checking on these is fairly simple. Just like with checking the heart rate, all you have to do is hit the button on the side of the band to cycle through and bring up your steps count. Fitbit has made it the absolute most user-friendly it could possibly be in terms of viewing your activity stats. If you want a little more in depth detail and complexity, you can move things to the Fitbit app or the PC dashboard where you can see things on a much more analytical level. The dashboard and the app should be your best friend, as you'll get much more information out of them and it almost feels like this is where the real meat comes from in terms of viewing your stats. While you're out and about the display on the Charge HR itself serves as a great option for "glancing" at specific things. 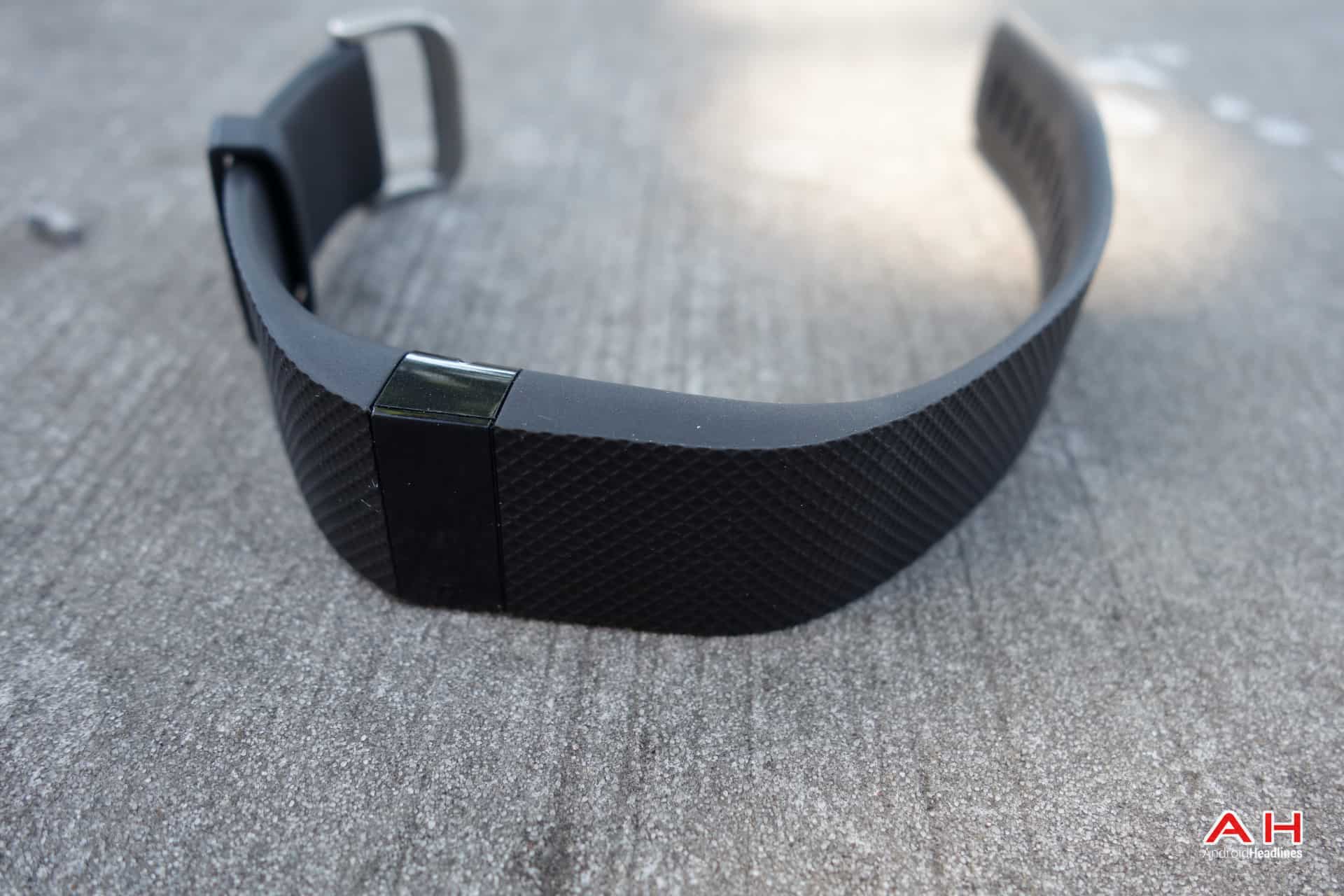 The Charge HR also holds other functions like a silent alarm which can be set from the app, and it also tracks your sleep patterns which you can view in detail through the app or dashboard. It can also be used as a watch, and hitting the activity button once will wake the display and bring up the clock as well as the day of the week just above the time. If you're worried about incoming calls while you're out exercising, the Charge HR has a caller ID feature which displays incoming calls from your synced phone so missing these shouldn't be an issue. During my personal use I had only one call come through to test out the caller ID, and it works basically as you'd imagine, scrolling across the display. 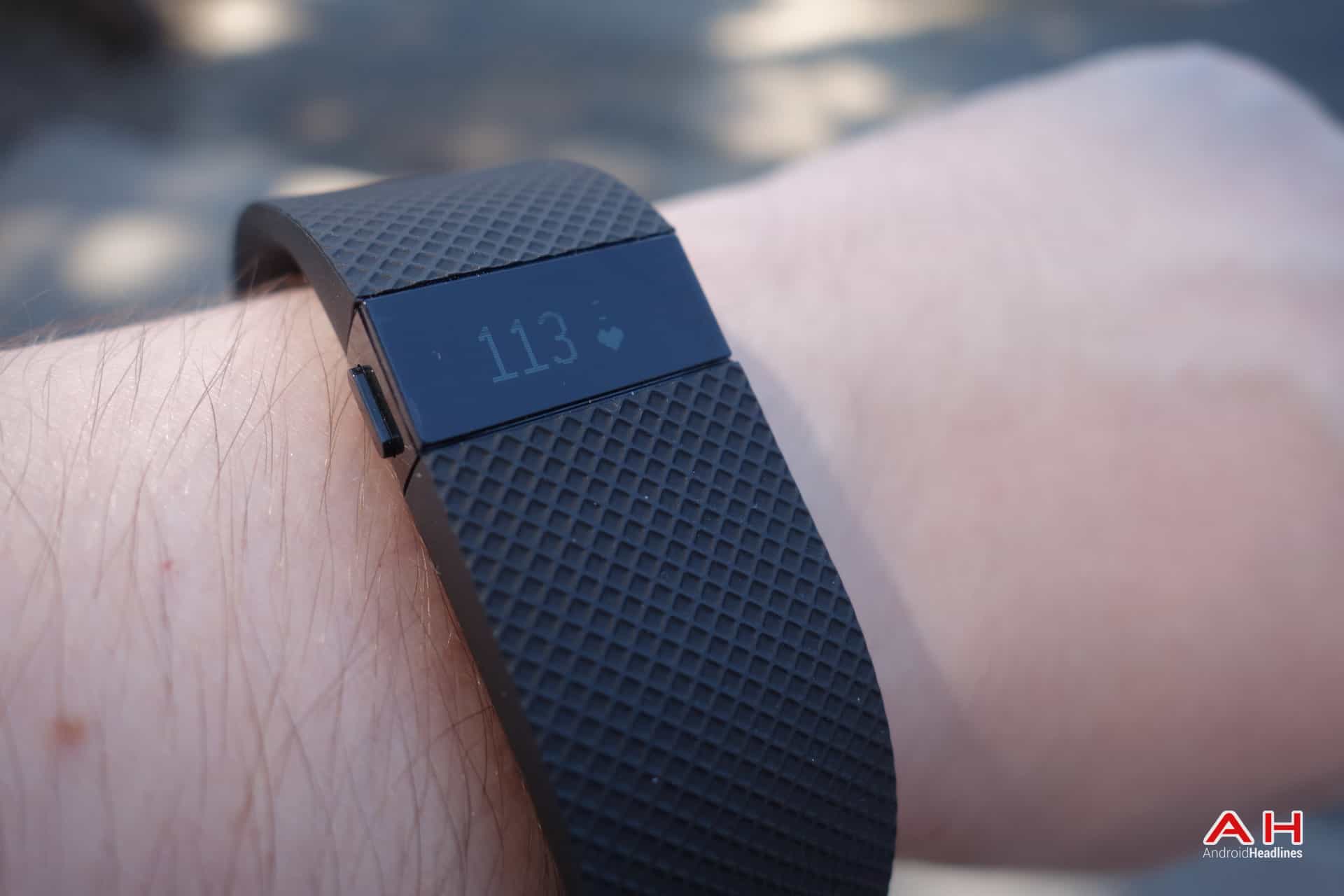 As for all the specific things the Charge HR is capable of, just like the Surge, you can use it to track your steps, calories burned, distance, floors climbed, as well as active minutes and you can track your workouts and exercise using exercise mode. It also carries a function for tap gestures which lets you tap the tracker to display a specific stat of your choosing. This option can be turned on and customized using the app. I found the Charge HR to be extremely accurate in counting my steps, as it was able to keep pace with me during every step I took. The other tracking stats seemed to be fairly accurate as well.

The Fitbit Charge HR is capable of syncing in two different ways. Wirelessly using the dongle which plugs into the USB port on any desktop or laptop, or via Bluetooth through the mobile app which is available on both iOS and Android. Either of these methods work great and should be super simple to complete as I had no issues with either one.

Charging is easy with the Charge HR. Simply plug the included USB cable for power into a USB port on your computer, or you can plug the cable directly into an AC wall adapter. In either case charging goes fairly quick and seemed to only take a couple of hours for me. 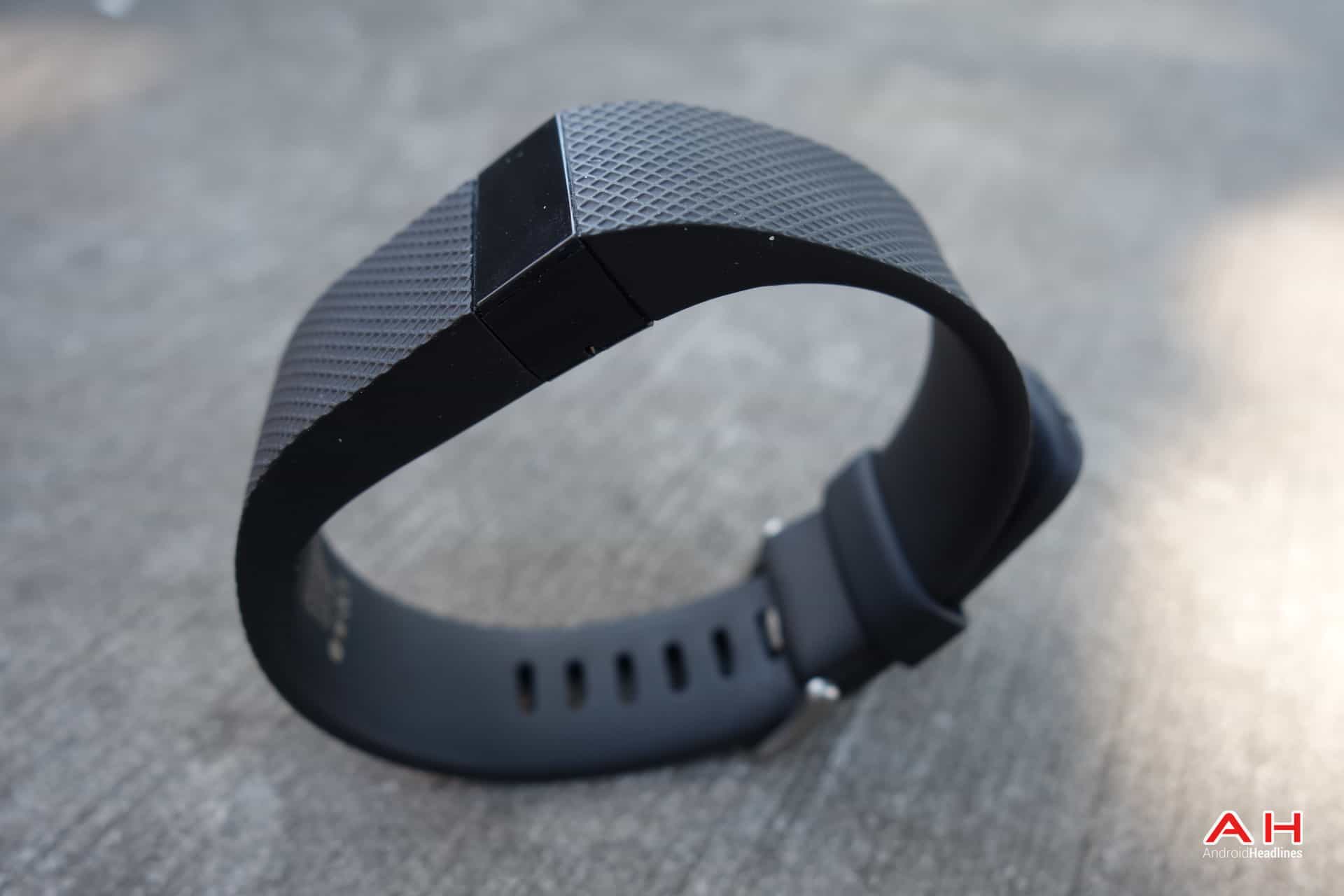 The Design of the Charge HR is a lot like the Surge. It uses an elastomer that feels soft to the touch and didn't make my wrist feel irritated at all during wear. It is recommended though that you take it off at certain intervals during the day, and I found this to be helpful and keep my wrist from feeling irritated. Since it isn't as wide as something like the Surge, it lends itself a little better to wearing with pretty much anything whether you're dressing sporty for exercise or dressing up to go out. It also felt a little less noticeable so if you're worried about drawing too much attention with a huge smartwatch like wearable, the Charge HR is slim enough that it shouldn't cause this problem. As activity trackers go, the Charge HR is certainly attractive and it comes in multiple colors so it's customizable. 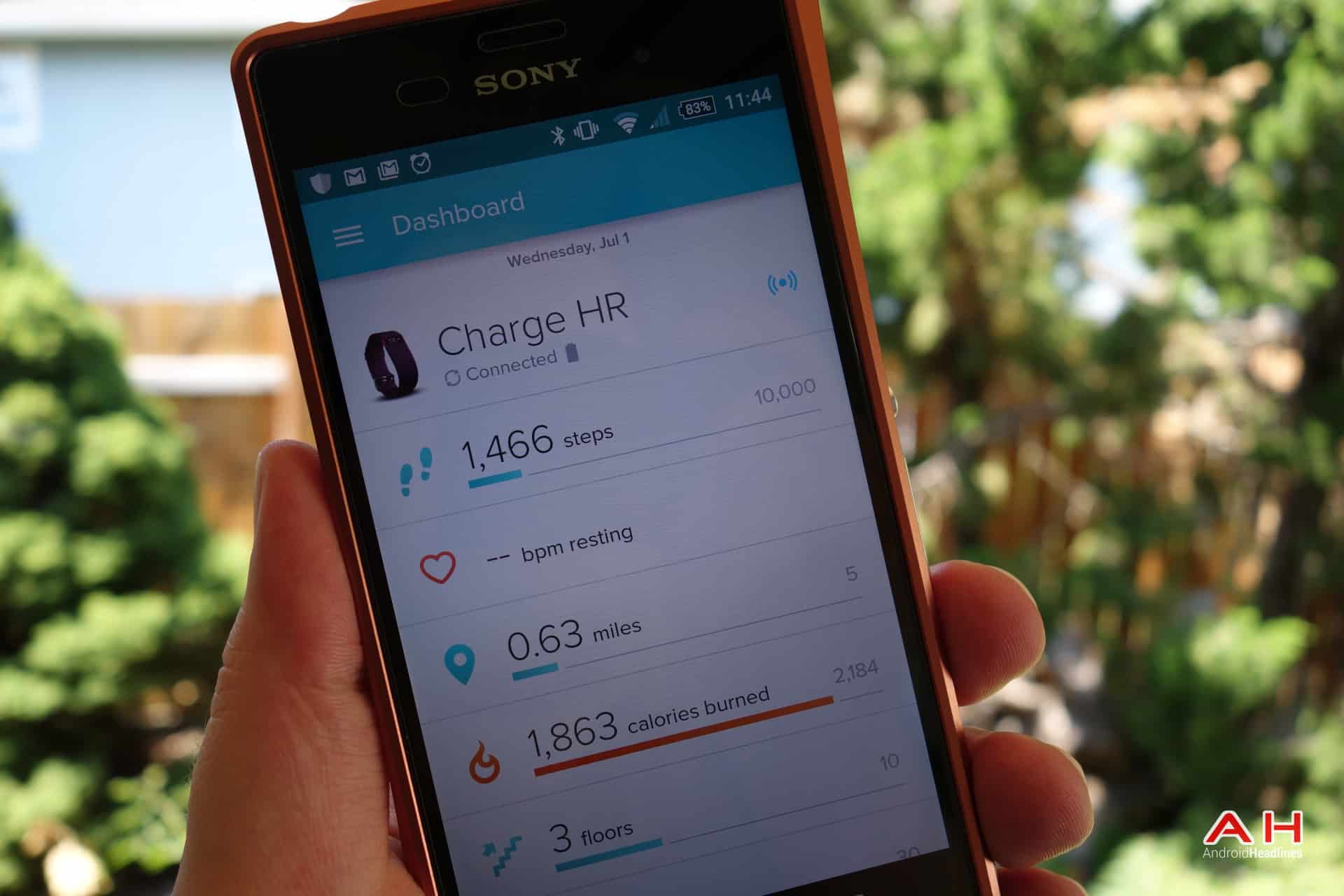 This is exactly the same as it is for the Surge or any other Fitbit product for that matter. The great thing is not only is the interface the same visually, Fitbit doesn't care which tracker you're using to track your stats, and the Dashboard as well as the mobile app merge your information. In doing this, if you have multiple Fitbit trackers you can rest assured that all your data will be present no matter which track you're wearing and all the information from any tracker feeds into the same dashboard so switching trackers doesn't give you a completely new set of stats. I felt this was a nice touch as it kept everything together and it made things feel a little more organized. 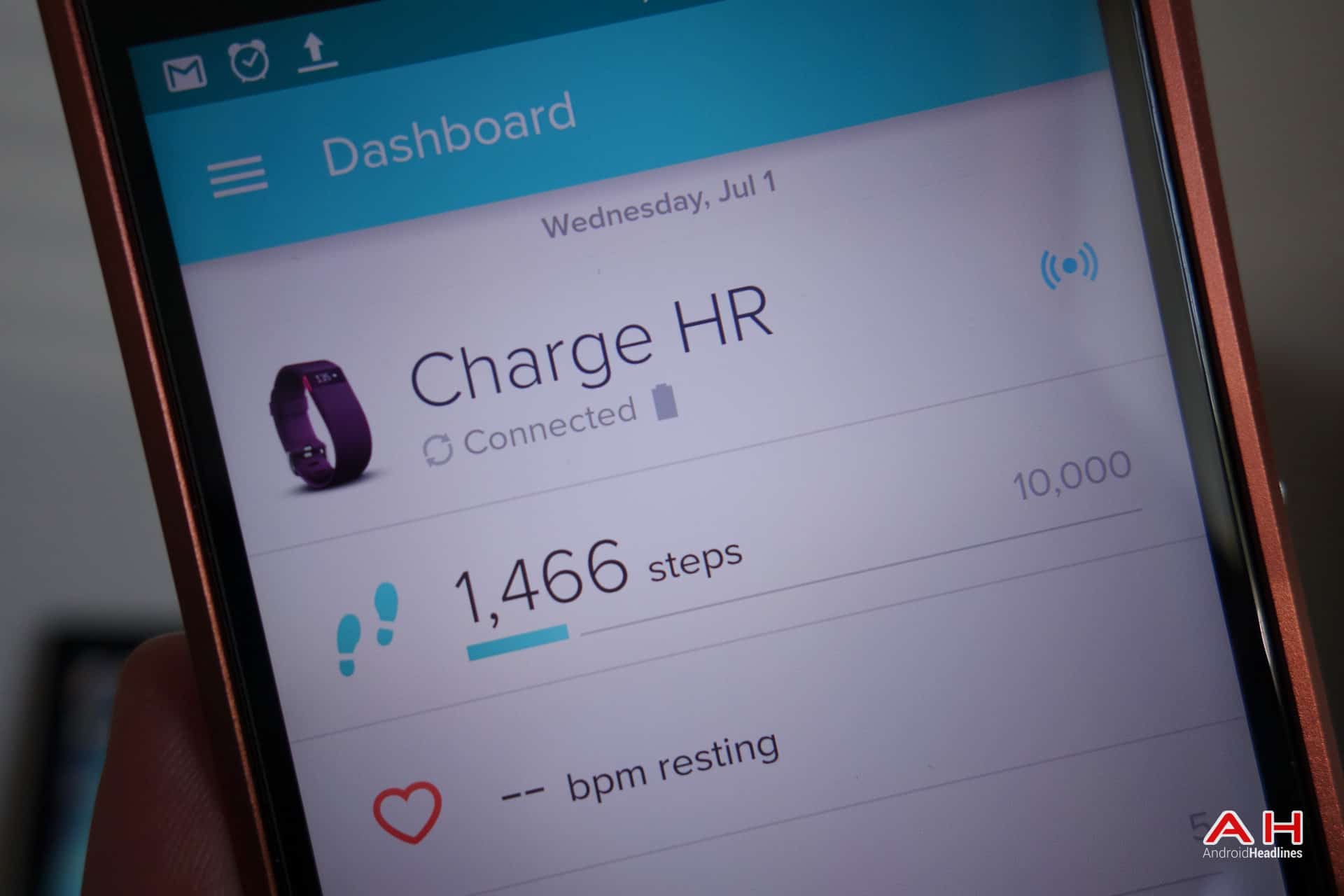 Fitbit rates the battery life at about 5 days for the Charge HR, which I have found to be pretty accurate, I haven't been using it for the full 5, but it hasn't needed a charge yet and still has plenty of battery life left. This is also likely due to the fact that it hasn't been getting used completely throughout my days, so I may personally end up getting more than 5 days before I need to plug it in. This will likely vary for others depending on how actively they use it and how active they are personally. The more active you are, it stands to reason the more active the functions on the tracker will be and thus draining the battery life more often. 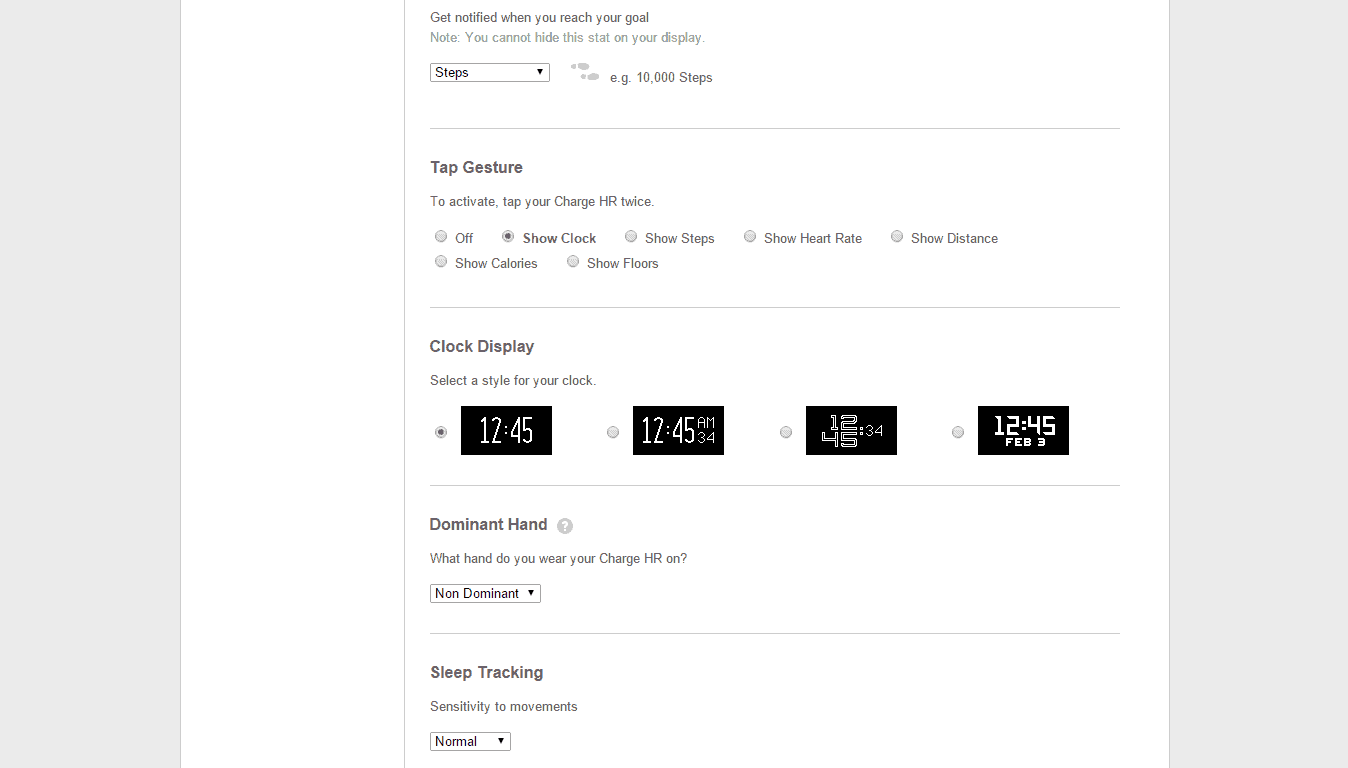 The Charge HR may not have a large display, but it is still customizable to an extent. You can configure which types of stats you want the ability to view on the display which can be managed from the dashboard settings, with options to turn on or off things like the clock, steps, heart rate, distance, calories burned, and floors climbed. You can also swap out the clock type you see on screen from four different options which you can see just above. 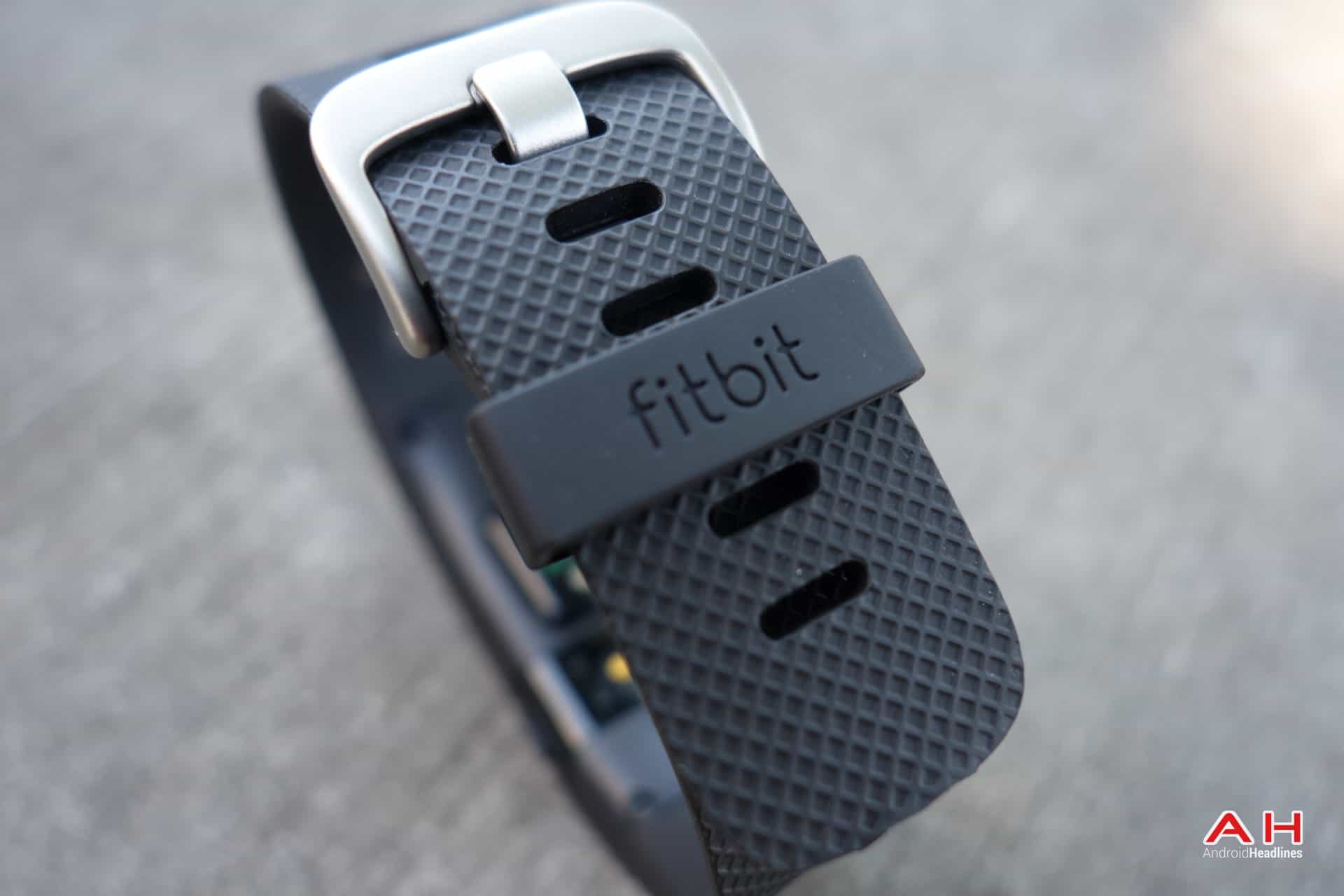 During my time of use I found the Fitbit Charge HR to be easy and simple to use, and it's lighter weight, slimmer design was comfortable for extended periods. There are less buttons to deal with than on the Surge, and it has no touch display interface so while it tracks just as many things (minus the GPS of course) it has a simpler control set. All you have to do is hit one single button. This made it great for knowing exactly what to do when I wanted to view stats, whereas with the Surge there were three buttons all with different functions. At $149, the Fitbit Charge HR is a great activity tracker option that does all the things it needs to, and for those who don't want a touch display or care for the GPS or music controls, it's nice less expensive option than going with Fitbit's highest model the Surge. You can grab the Fitbit Charge HR for $149.95 over at Amazon in either black or plum colors and in either small or large size bands.