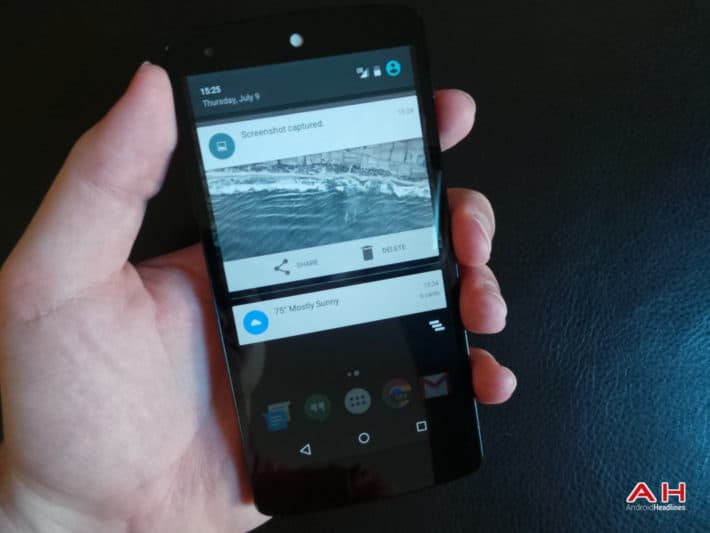 So far we've already seen some changes to the app drawer with the second Android M Dev Preview build, where Google fixed some app drawer bugs and took away the letters associated with the apps categorization, and Google also added in something called a System UI Tuner which lets users customize the icons they want shown in the status bar up top. With that last particular detail, users can basically cut everything down to just the clock and the battery icon if they wish, and then turn on the embedded battery percentage on top of that. If you're messing around with the Android M Dev Preview build 2 you may or may not have already noticed these things.

Another new change it seems Google was keen to add is one which other OEMs have been implementing for some time now. The ability to delete screenshots from your phone's gallery and memory after taking them. Not just deleting them from any place mind you, but specifically Google has added the ability to delete the screenshots from the notifications that show up in the notification pull-down panel after a screenshot is taken. This makes things a whole lot simpler if the screenshot you took wasn't quite what you were hoping to get, and thus alleviating any need to go in clean house in the gallery after the fact later on.

Now that you can delete the screenshots from their notifications that appear, if you mess up on a particular screenshot you can delete it right away from the notification and go right back to taking a new one. No more needing to go into the gallery to find it and delete it from there. It may not be a monumental change, but it's one which shaves off a second or three for the user who utilizes screenshots often enough. In addition to deleting them, you can also still share them just as you could before, so there is nothing new there but it's nice to see that Google hasn't taken it away, especially since they would have no reason to. if you're messing around with the Dev Preview's new build, have some fun with the new screenshots tweak.