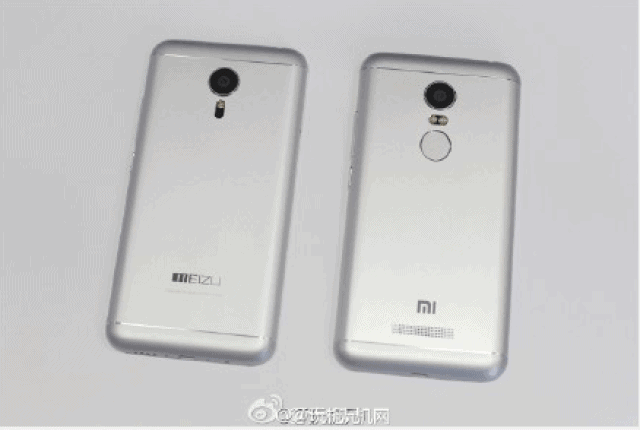 Xiaomi has released quite a lot of devices this year, and amongst them, we've seen this China-based company release quite a few smartphones as well. The Redmi 2, Mi Note, Mi Note Pro… and so on. The company is expected to release a couple more devices before the end of the year though, and Redmi Note 2 is one of the most anticipated ones. The original Redmi Note launched back in March 2014, and it's about time Xiaomi announces its successor. We've seen a number of Redmi Note 2 leaks, and this time around we have some new info to share with you, read on.

The alleged Redmi Note 2 handset images popped up online, interesting enough, this time the Redmi Note isn't posing alone. Xiaomi's upcoming mid-ranger is posing next to Meizu's latest offering, the company's new flagships, Meizu MX5. The two devices seem to resemble one another quite a lot, and this Redmi Note 2 leak actually goes hand-in-hand with the ones we've seen lately. The device seems to be made out of metal, and it sports a fingerprint scanner below the rear-facing camera. Its speaker is located below Xiaomi's logo in the bottom part of the phone's back.

That being said, we've also seen quite a few Redmi Note 2 specification leaks thus far. According to some previous info, the Redmi Note 2 will feature a 5.5-inch 720p or 1080p display along with 2GB of RAM and a 13-megapixel rear-facing shooter. MediaTek's Helio X10 SoC was mentioned in one leak, but it is more likely that the Redmi Note 2 will be powered by one of Qualcomm's mid-range SoCs. This handset will come with Android Lollipop pre-installed with Xiaomi's MIUI OS installed on top of Google's offering.

There you have it folks, this might be the Xiaomi Redmi Note 2. This smartphone is due to be released soon, though we're still not sure when. Considering how many leaks we've seen in the last couple of weeks, we do expect the Redmi Note 2 to see the light of day in the coming weeks, so stay tuned for that. Either way, We'll let you know as soon as some additional info surfaces.