Although Virtual Reality technology has been in and out of the public eye for over thirty years, we have seen something of a recent resurgence of interest in the product. This has been driven by sufficiently powerful technology to drive the virtual reality system being condensed into smaller and smaller packages. There are a few problems with virtual reality both from the technology and social sides of things. On the technology front, the main issue here is that the computing power necessary to drive an accurate virtual reality system has significant power and cooling requirements: modern smartphones are able to produce a virtual reality world but the quality is still considered too low by industry experts for ordinary consumers rather than early adopters. However, with each generation of product, we are able to do more with less: various industry experts believe that in a few years, our smartphones will be able to produce a near-photo realistic virtual reality environment.

Away from the technology behind the virtual reality engine, another issue that the industry is grappling with is that of a “killer application” for the technology. The most obvious use for virtual reality technology is gaming, especially when we consider that this is a multi-billion dollar industry around the world and those among us who were captivated by the idea of virtual reality in the 1980s are now likely to be in a position to be able to afford the technology in 2015. There are many other potential uses for virtual reality, including e-commerce, education and training. A new report by BI Intelligence shows some estimates for how quickly the technology will be adopted across the world and is making some aggressive expectations. Chief amongst these is how BI Intelligence expects the market to experience very strong growth, estimated at 99% compound between 2015 and 2020. However, it needs to be highlighted that consumer virtual reality technology is very much in its infancy and this very strong growth is from a low base. If a business has sold fifteen thousand headsets in 2015 and sells thirty thousand in 2016, this is 100% growth in just twelve months but has only sold forty five thousand headsets in two years! In terms of financials, BI Intelligence expect the hardware market to be worth almost $3 billion by 2020, up from an estimated $37 million in 2015.

BI Intelligence believe that virtual reality headsets sold to the world’s 1.2 billion gamers will be the driving force behind this explosive growth. The more successful technology will be that which must be paired up to an existing item of technology, which is considers is likely to be be our smartphone – think Google Cardboard. The smartphone itself will evolve into a better virtual reality engine thanks to the industry’s push towards higher resolution screens and more powerful graphic and application processors. As such, the adoption of virtual reality will also be driven by smartphone adoption as much as eager gamers. Whilst the smartphone is a part of everyday life around much of the world, it is experiencing high growth in other regions, most notably India. 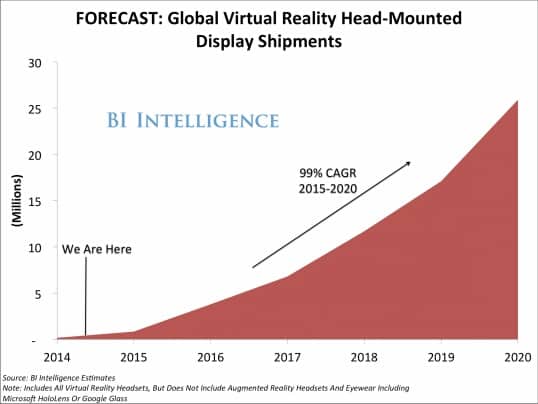