In a galaxy far, far away, there was Microsoft Office.  Any respectable business and even employees or others that wanted solid programs like MS Outlook, MS Word, MS Excel and MS PowerPoint to use at home, bought the MS Office suite.  It had no real competition and quickly pushed aside its only rival, IBM’s Lotus Office Suite, and rightly so as it was a kick-ass collection of applications.  Now, fast forward to 2006 when a company named Google launched Gmail and later in the year brought out Google Talk, Google Calendar and Google Page Creator (changed to Google Sites).  That same year, Google Apps for Education made its first appearance.  Eventually they added a Google Apps Premier Edition; in 2010 they added Google Apps Marketplace and Google Apps for Government.  In 2011, they added Google Apps for Business at a fee of $5 per user per month with no contractual obligation…later in 2014, they renamed it Google Apps for Work.

Google Apps for Work is comprised of Gmail, Google Calendar, Google Drive, Hangouts, Google Docs, Google Sheets, Google Slides, Google Forms, Google Sites, Google+, and Google Apps Vault.  With the exception of Google Apps Vault, all are included in the basic plan, which costs $5 per user per month or $50 per user per year.  Many people, especially young people have literally grown up with Google…a trend coined by David Politis, founder and CEO of BetterCloud, as “Growing up Google.”  BetterCloud is a cloud service that works with both Google Apps for Work and Office 365 and in their latest survey they asked 1,500 IT professionals to get a feel for the trends and discovered some interesting results.

Google is what the young people know and are comfortable using.  While many older companies and older employees are currently comfortable with MS Office, as they retire and younger people fill their spots, the Google ‘generation’ could easily move in and take over from Microsoft, which is often thought of as out of touch with the real world.  Like Politis points out, “Why would young entrepreneurs make the shift to Office 365 when they have used Google Apps for their entire life?”  Office 365 is still very popular and has, for the first time, surpassed Salesforce as the number one app used on business networks.  This meteoritic rise in popularity should come as no surprise because of MS Office’s huge installed base of users.

Microsoft should get too complacent however, if older companies are choosing Office 365, that means the young companies and young people are choosing Google.  BetterCloud’s study shows that in organizations where the average age is 18-34 years old, 55-percent are more likely to choose Google Apps over Office 365.  Office 365 users are more likely to use the local version and ignore the cloud – now mind you, this makes no difference to Microsoft as they receive their annual subscription price whether the cloud is used or not.  However, it makes a big difference to the companies paying that annual fee because they do not reap the cost-reducing benefits of using the cloud.  The study showed that companies using Google Apps doubled their cost savings over using Office 365.

While MS Office 365 is the leader right now, it is very possible that Google Apps for Work will take over based on the growth of smaller companies and even within older companies, as younger employees replace the older mindset, they will bring Google with them.  You must also take in account the cost savings of Google over Microsoft as companies struggle to find more ways to decrease costs to increase profits.  The Google Apps for Work has garnered many positive reviews – their lower cost, all-inclusive suite offering, ease of setup and working well across all devices…PC, tablets and smartphones.  Certainly MS Word and PowerPoint are more sophisticated than Google’s Docs and Presentation, however, Google is constantly working to improve them and this is something that should have Microsoft looking over their shoulders. 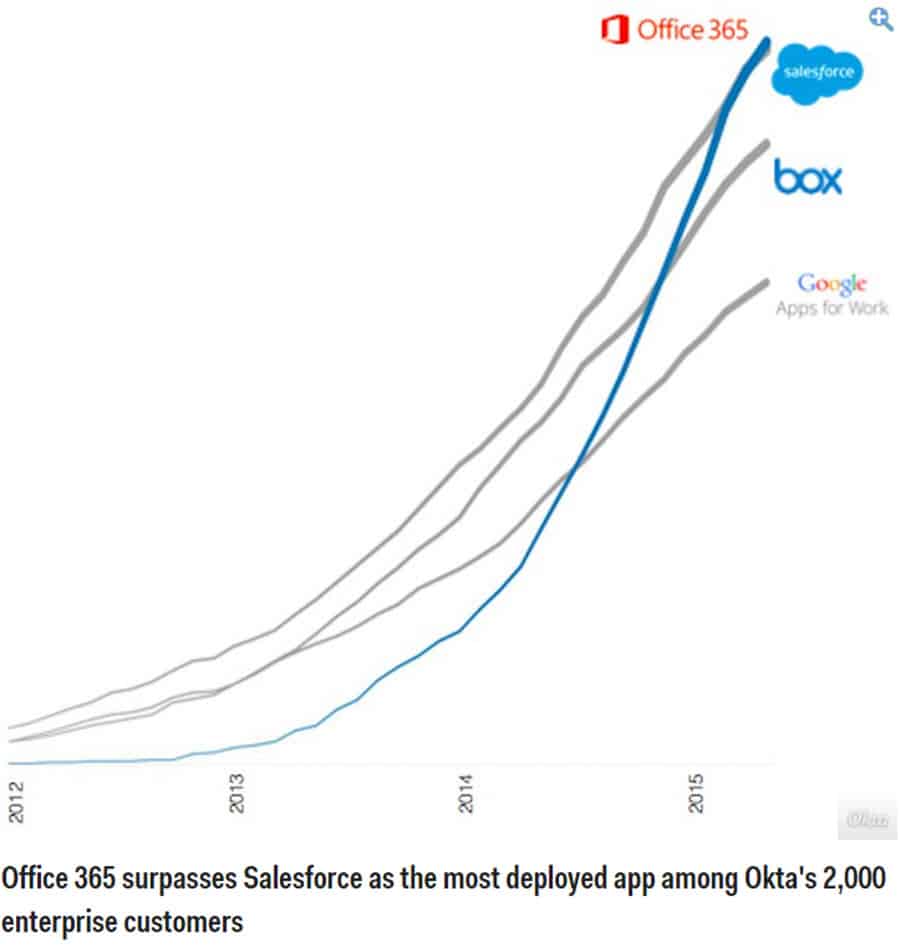