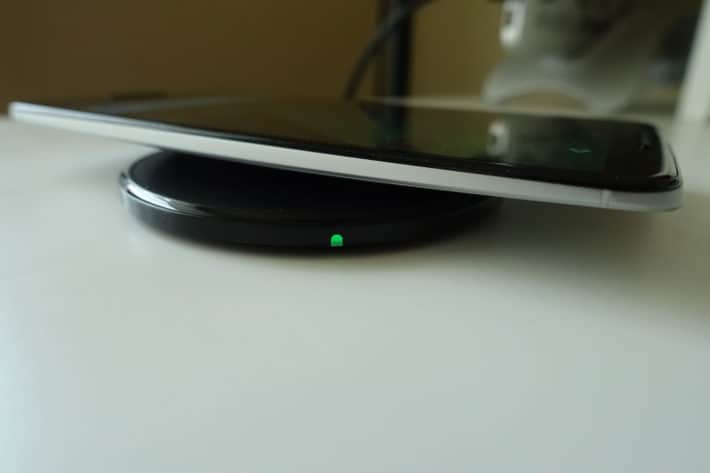 When you went to pick up your new Galaxy S6 or S6 edge, or maybe your LG G4 or G Flex 2, or even the Nexus 6, battery was likely one of your concerns, especially with such huge pixel-dense displays packed onto such svelte frames.  The battery has been shrinking, while displays only continue to grow.  And while battery technology is still developing the next huge leap forward, the input, the charging, is what many manufacturers have been focusing on.  The Nexus 6 debuted with Quick Charge 2.0, enabled by its use of a Qualcomm Snapdragon 805, and the S6 and S6 edge have it enable because they utilize Samsung's Exynos 7420 processor.  Meanwhile, the G Flex 2 got Quick Charge courtesy of its Snapdragon 810, and the G4's 808 now supports it, thanks to an update.  But, those are all just for wired connections, for when you can set your device down for long periods of time, that are shortened thanks to Quick Charge 2.0.  Meanwhile, if you have Quick Charge and use your S6's wireless charging capability, you're left with the same old slow trickle, but that's ending soon.

The Wireless Power Consortium, WPC for short, are the creators of the Qi, pronounced 'chee' if you still weren't sure, and they have a have a huge update to the technology inside your wireless charger.  Welcome to the future everyone because, according to the WPC, the Quick Charge 2.0 capability of a wired charger are coming in a new wave of wireless chargers.  This new standard will be able to offer up 15 watts of power to the device while charging, allowing for much faster 'set down, pick up' charging experience.

The WPC also say that the members within itself are going to be the first to have access to, and the chance to implement, this new Qi charging technology.  The new standard will likely begin testing soon, and allow for a quick and easy rollout after WPC members have their exclusive time with it, so that all the companies that offer more reasonable priced charging pads can start to work towards an updated version of their hardware as well.  But what does this all mean for Android?

Well, since fall of 2012, Google's Nexus line of smartphones have featured Qi wireless charging, and this means that we might see this new standard be implemented in time for the Nexus device that has been rumored and suggested since I/O a while back.  It also means that the other fall flagships, namely Samsung's Galaxy Note 5, which has also been highly rumored lately, might feature the new Qi technology, since Samsung might make the bold move of taking battery swappability from Galaxy flagship fans entirely this fall with the next Note's launch.  Though it's not the battery breakthrough that many of us are eager to see, it will definitely ease the struggle that wireless charger-loving folk have faced for a while.