It would sure be nice if Sony could settle down and start producing and distributing their smartphones like every other manufacturer does.  Instead, Sony seems to hesitate, to be unwilling to change, act so unsure of themselves…and then wonder why they are not selling more smartphones.  It is not a wonder that US carriers are afraid to make a full commitment to carrying their line.  It is a real shame too, because they make a very good smartphone that most people will never have an opportunity to purchase.

Let's take a look at their latest offering in their Xperia Z line of smartphones.  The last rendition was the Sony Xperia Z3, but T-Mobile was the only carrier to sell it (who has since stopped selling the device), although Verizon eventually got their own Xperia Z3v model.  One would logically think that the next rendition would be the Xperia Z4…and it was, but only for the Japan market.  Shortly after the world cried 'foul,' Sony decides to come out with an Xperia Z3+ for the rest of the world – but wait, there is more – Just this morning, Sony and Verizon announced their own variant, the Sony Xperia Z4v.  So now they have an Xperia Z3+, Xperia Z4 and Xperia Z4v – pictured above, in that order from left to right.  What is exactly are the differences in these models that Sony had to make and sell three variations of the same device?

As you can see from the chart below, there is not any real difference in the Xperia Z3+ or the Xperia Z4, only in the name and where they are available…really makes you wonder why Sony went with the Xperia Z3+ nomenclature…why not make them both Xperia Z4's and get it over with.  Another question maybe if T-Mobile will get the Xperia Z3+ to sell, now that Sony has released it in Europe.

The real difference is between the Xperia Z4v for Verizon and the others.  Here, Sony has made several much-needed improvements – the one that really jumps out at you is the display.  The Xperia Z4v has the WQHD display resolution that bumps up the pixels to 2560 x 1440, so now it will really compete with the likes of the Galaxy S6/S6 Edge and the LG G4.  Sony also increased the battery size from 2930mAh up to 3000mAh – not a big difference, but it will help with the new display.  Also in the battery area, the Xperia Z4v adds built-in wireless support for both Qi and PowerMat technologies.  The extra sized battery and wireless charging bumped up the weight from 144 grams to 160 grams and, just like the Xperia Z3v for Verizon, you are limited to only Black or White – no fancy colors here.  All-in-all, the Sony Xperia Z4v sounds like a sure winner…now we just need Sony to get them to Verizon. 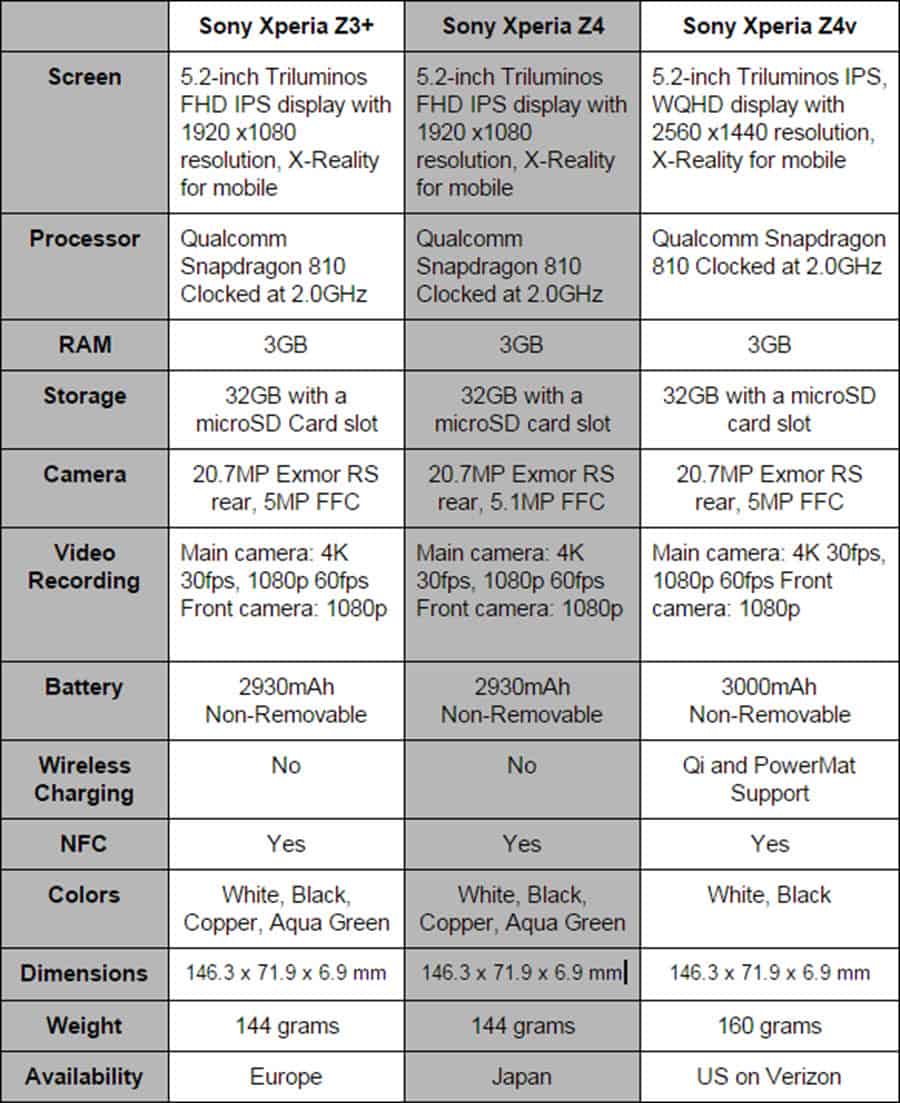