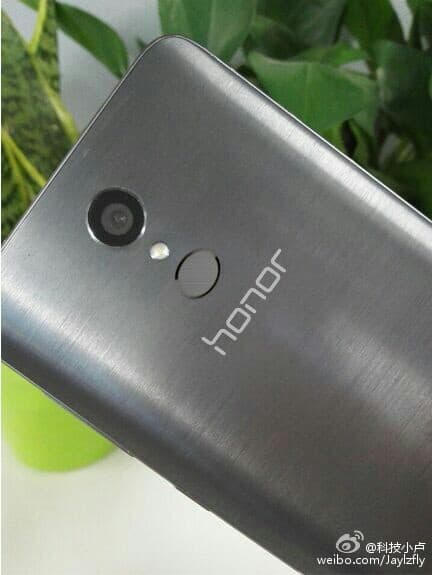 After Huawei launched their P8 range of handsets, the Honor 4C mid-ranger, and two mid-range tablets, new leaks and rumors started coming in regarding the company's new Honor-branded device. The device in question is the Honor 7 which has been leaking like crazy in the last couple of weeks, and actually got certified a couple of days ago. Huawei did a great job in 2014, and it seems like the company wants to continue doing that this year as well.

Anyhow, we have some new info regarding the alleged Honor 7 smartphone. You've seen its info and renders provided by TENAA, and the phone has just leaked yet again, though this time, in a real life image. If you have a keen eye, you've already noticed that this image is actually completely different than the one that has been leaking recently and that was provided by TENAA. The phone pictured in the image above actually sports a rounded camera and the fingerprint scanner, not to mention that its LED flash is located below the camera, not by its side, as it's the case with the Honor 7 handset.

So, which handset is this? Well, it is possible that this is the Honor 7 Plus, or some new Honor-branded device. We really doubt that Huawei would release two Honor 7 variants which sport identical names, and yet look completely different. On the other hand, it's possible that the rumors thus far (and TENAA's listing) provided the wrong image of the device, though that's highly unlikely. Either way, we'll find out soon.

According to TENAA's listing, the Honor 7 (PLK-AL10) will offer 4G LTE support, both TD-LTE and FDD-LTE. TENAA's listing didn't reveal the phone's specs, but according to a number of previous leaks, the Honor 7 will feature a 5-inch 108op (1920 x 1080) display along with 3 or 4GB of RAM (both variants will be available), and various internal storage options. The phone will be fueled by the HiSilicon Kirin 935 octa-core processor, and a 13-megapixel shooter will be located on its back. The 3,280mAh battery will also be a part of this package, and according to rumors, the two variants of the device will cost 1,999 Yuan ($322) and 2,699 Yuan ($435), respectively.