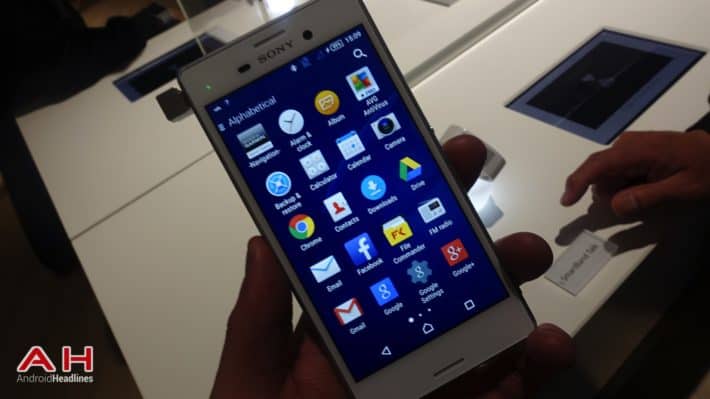 It has been a long time coming, but the new Sony Xperia M4 Aqua is finally going to surface in Canada sometime in mid-June.  We reported back in early March that Sony was indeed sending its new mid-range device to Canada sometime this spring…which is quickly turning into summer.  The press release gives no specific date or price – it sold for about US$375 in Europe – but does tell us it will be available on multiple carriers and lists Bell, Fido, Videotron, Virgin Mobile and WIND Mobile and it will be available in classic white and black.

Sony is upping the mid-range category by offering a smaller version of its Xperia Z model, complete with 64-bit processing, waterproofing and a long, two days of usage out of its 2,400mAh battery.  It sits squarely in the middle between the lower end Xperia E4 and the new Xperia Z3+.  It surrenders the glass backing found on the Z series for a metal backing, but most importantly, in many eyes, it retains the IP65/8 dust and waterproof rating, so you can take it anywhere with you – even under shallow water for 30 minutes.

The Sony Xperia M4 Aqua sports a 5-inch HD display with a resolution of 1280 x 720 pixels and about 294 pixels-per-inch (PPI) – a far cry from the new QHD displays, but not too far off from Sony’s 1080p on its own Xperia Z3+ – but still a nice display for a 5-inch screen.  It is rocking a 64-bit Qualcomm Snapdragon 615 octa-core processor with four cores clocked at 1.5GHz and four cores clocked at 1.0GHz.  The M4 Aqua has 2GB of RAM and 16GB of internal storage, but it does allow for expansion for up to an additional 32GB via a microUSB card.

The main camera uses a 13MP Sony Exmor RS sensor with autofocus and LED flash.  It is designed to capture great images in low light and strong backlight using its Superior Auto Mode.  They do not include OIS in any of their smartphone designs but instead use their built-in SteadyShot to reduce movement and blur.  They also incorporate a wide-angle 5MP sensor for their front-facing camera (FFC) for terrific group selfies or video chats.

The M4 Aqua also has Sony’s 3D Surround Sound Technology (VPT), Clear Audio, Clear Bass, xLoud Experience and a manual equalizer to give the user a great sound experience.  It also has the usual Wi-Fi and hotspot functionality, Bluetooth 4.1, NFC and a microUSB port 2.0 for charging and data transfer.  It will be running the newest Android 5.0 Lollipop out-of-the-box.  It measures 145.5 x 72.6 x 7.3mm and weighs in at 136 grams.