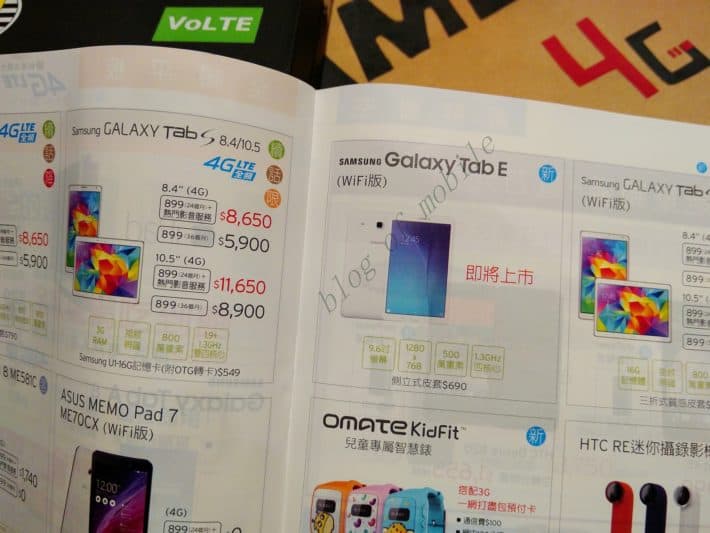 Samsung's Galaxy series of Android-powered devices is well-known around the world. So much so, that people are constantly referring to Android smartphones as 'Galaxy phone'. Anyhow, Samsung releases a ton of Galaxy devices a year, and tablets are included in that equation. We've seen Galaxy Tab A, Tab E and Tab J devices across trademark websites earlier this year, and it seems like the Tab E is going to land soon. It hasn't been officially announced just yet, but the Tab E info has leaked in a magazine of all places, read on.

The Samsung Galaxy Tab E has been listed in this month's edition of a Taiwanese magazine under the 'SM-T560' model name. According to the listing, this tablet will feature a 9.7-inch 1280 x 768 display, and will be powered by an SoC clocked at 1.3GHz. We still don't know if we're looking at a quad or octa-core SoC, but chances are this is a quad-core unit. The 5-megapixel rear-facing camera will also be a part of this package, and Android 5.0 Lollipop will come pre-installed here. All in all, this will be an entry-level tablet for the company, at least judging by the specs, but that was to be expected. It is actually possible that this is, in fact, the Galaxy Tab 5 disguised as Galaxy Tab E. Though it seems improbable considering that it says 'Galaxy Tab E' in the magazine itself, we'll find out soon.

The Galaxy Tab S2 has been leaking intensively lately as well, and it seems like that thing might land soon as well. Either way, Samsung will release a number of tablets before the end of 2015. If you'd like to take a look at the listing in the Taiwanese magazine, check out the provided image. There you have it folks, an entry-level Samsung-branded tablet is on its way, and judging by the provided specifications, this thing will be rather affordable and made out of plastic. Who knows though, perhaps Samsung intends to surprise us with some overall changes, even though the listed image in the Taiwanese magazine actually shows us a rather regular looking Samsung tablet. Either way, stay tuned, we'll report back as soon as more info pops up.