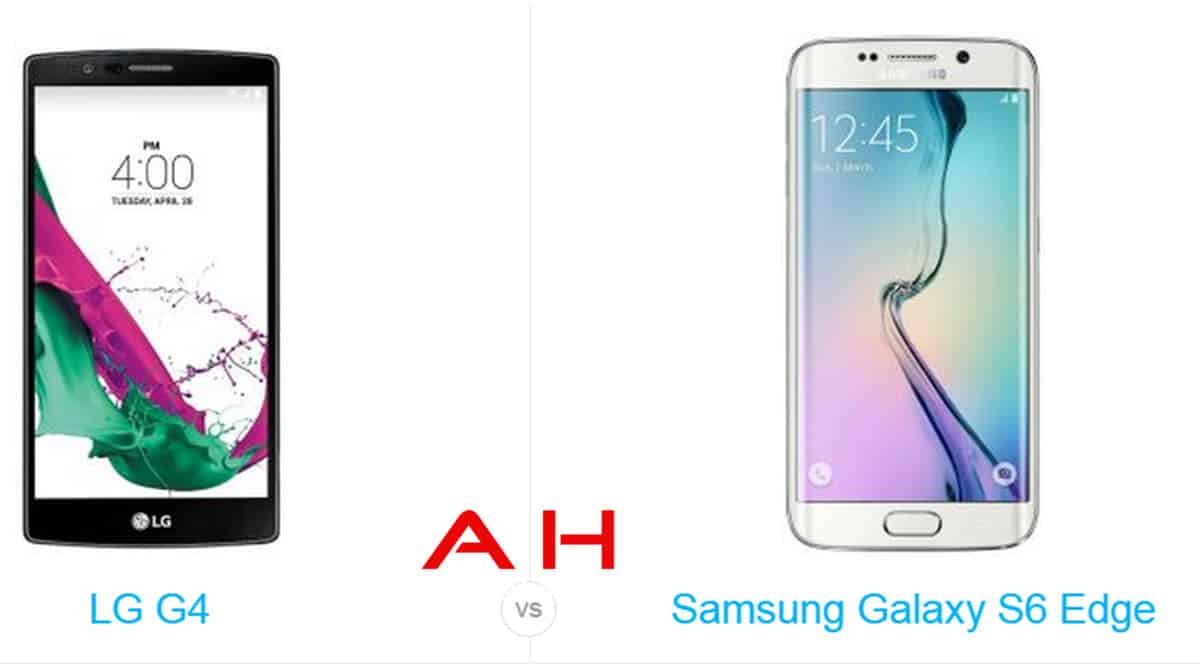 Do we have a good one for you today – the new LG G4 goes up against its archrival, Samsung and its new Galaxy S6 Edge.  LG gave the G3 an evolutionary update, while Samsung started from the ground up in redesigning their rather stale Galaxy S5.  Did LG or Samsung end up with the better smartphone?  Which device encompasses the most innovation and has the specs to win this comparison of titans?  First, we will briefly look at the similarities between these two great devices and the go into more detail.

Both devices are close in physical dimensions with the G4 about 6mm taller and wider, of course the G4 has a 5.5-inch display versus the 5.1-inch display on the S6 Edge.  The G4 and S6 Edge both use the Quad HD (QHD) display with a resolution of 2560 x 1440 pixels, the G4 comes in at 538 pixels-per-inch (PPI), and the S6 Edge has 577 PPI, due to the smaller display.  Both devices offer 3GB of RAM and 32GB of internal memory – the G4 has a microSD slot to expand and the S6 Edge offers up a 64GB or 128GB option with no room for expansion, however, it does use faster RAM and Flash memory technology.  The cameras these two smartphones offer are the best in the business and both use a 16MP sensor, wider apertures, OIS, LED flash, autofocus for their main shooters and larger front-facing cameras (FFC) – the G4 has an 8MP and the S6 Edge uses a 5MP sensor.

The LG G4 and S6 Edge both have the usual suspects – Wi-Fi, Bluetooth 4.1, GPS, are NFC compatible, a built-in IR Blaster and microUSB port for charging and data transfer.  The S6 Edge has wireless charging built-in and the G4 has optional wireless charging with the purchase of an extra back.  Both have the Quick Charge capabilities built-in.  They both have a single speaker with the G4's on the back and the S6 Edge's on the bottom. 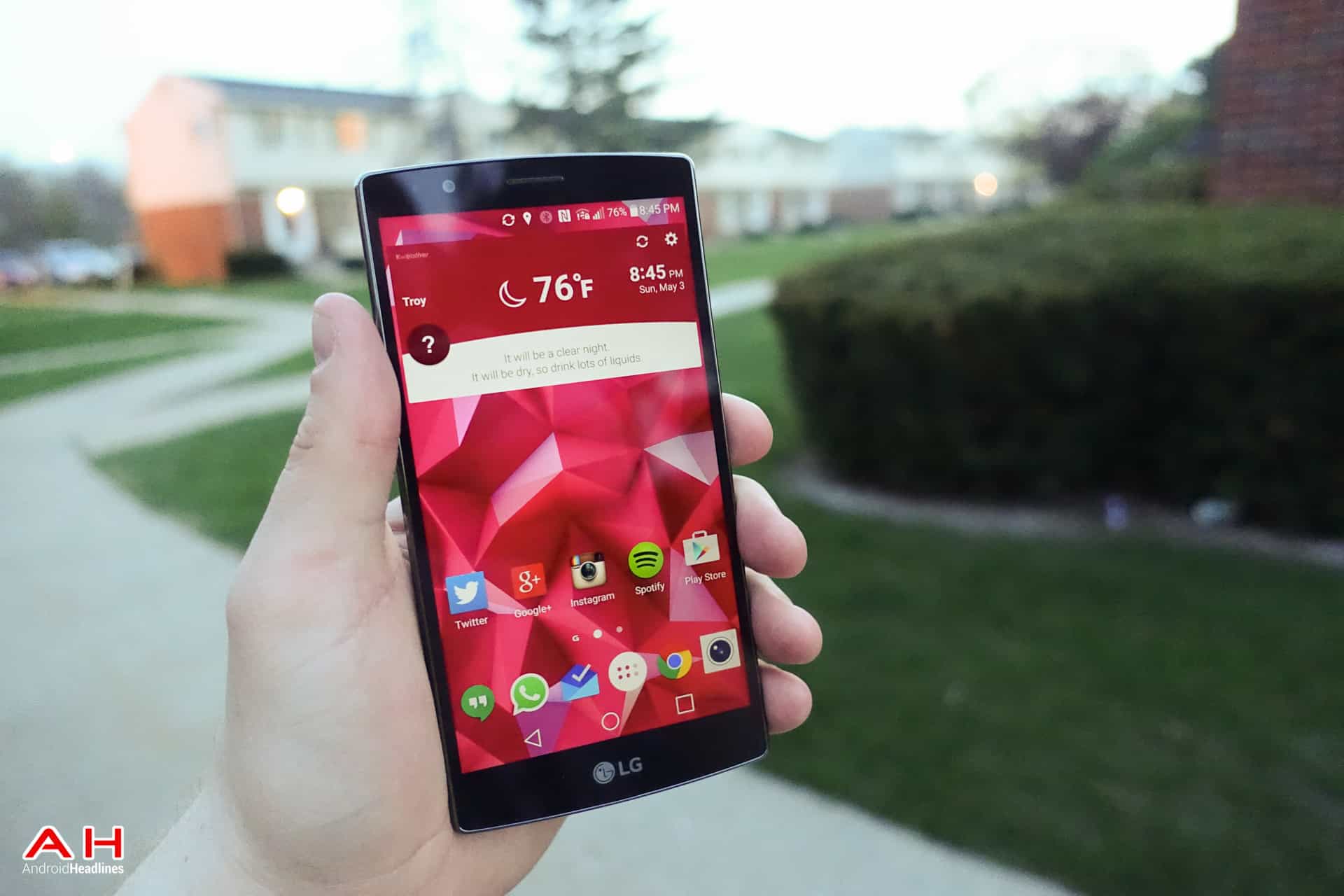 The new LG G4 is merely an evolutionary update from the popular LG G3.  The device is slightly larger and LG added a slight curve to the device – not a LG G Flex 2 kind of curve – but just enough to make it more comfortable to hold.  LG improved the rather dull display on the G3 by adding more brightness and contrast.  Along with an improved metallic looking back, you can special order ($35) a real leather one in several colors with real stitching up the back.  While the LG G4 does appear very similar to last year's LG G3, it does look and feel even better.

The LG G4 sports a 5.5-inch QHD LCD Quantum display with a resolution of 2560 x 1440 pixels and 538 PPI…and in line with the dual curved Galaxy S6 Edge's QHD display with 577 PPI.  LG claims their improved display allows for a 25-percent brighter display with a 50-percent increase in the contrast and 56-percent improvement to the color accuracy…and you can really tell the difference over the duller display on the LG G3.  The panel is much brighter than last year's and the colors really do pop out.

LG decided to pass on using the Snapdragon 810 octa-core processor for the LG G4 and instead chose the Qualcomm's 64-bit Snapdragon 808 hexa-core processor.  The 808 is slightly below the 810, but is optimized for the LG G4 and should be easier on its battery and offer steady performance.  This is going up against the Exynos 7420 octa-core processor in the Galaxy S6 Edge, with technology and specs above the Snapdragon 808.  The LG G4 is packing 3GB of RAM and 32GB of internal storage, but also has room for expansion via a microUSB card.  The Galaxy S6 Edge offers up 3GB of DDR4 RAM and 32GB of UFS 2.0 storage…you can also get a 64GB or 128GB model, however, the S6 Edge has no way to expand its memory.

The camera on the LG G4 is one of the two best out there on a smartphone and the Galaxy S6 Edge is the other.  The LG G4 sports a 16MP sensor, laser autofocus, dual-tone LED Flash, and a wide f/1.8 aperture for better shots in low light, along with OIS.  The LG uses a large 8MP FFC camera that also includes the wider f/1.8 aperture lens and it should take excellent selfies and provide great video chatting.  LG also provided excellent camera software as well, especially in the Pro Mode.  The Galaxy S6 Edge matches up very nicely to the LG G4 in this area – 16MP camera and 5MP FFC (see more details in S6 Edge section) The LG G4 uses a removable 3000mAh battery, compared to the non-removable 2600mAh on the Galaxy S6 Edge, although the S6 Edge does offer built-in wireless charging and a faster quick charge.

The LG G4 does offer optional wireless Qi charging, with its controls easily accessible on the back of the device and includes a built-in FM stereo radio.  The LG G4 comes in a variety of colors, both in the metallic and leather backs.  It will cost you about $200 on a two-year contract and about $600 off-contract. 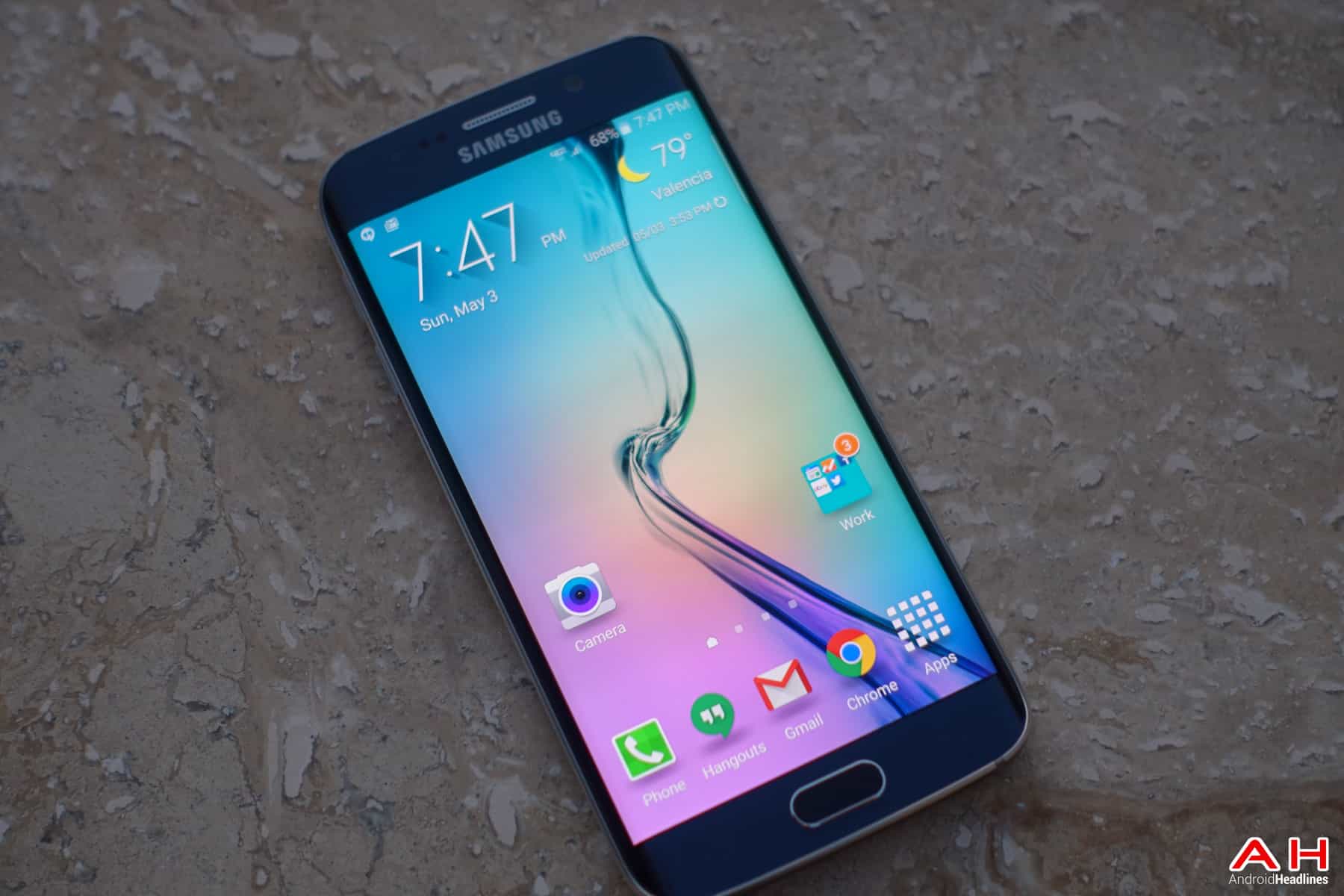 Samsung really changed their approach in designing the new Galaxy S6 series – no more plastic, instead we have a solid aluminum unibody with Gorilla Glass 2.5D on the front and Gorilla Glass 4 on the back.  It comes in a variety of colors, such as White Pearl, Black Sapphire, Gold Platinum and an exclusive Galaxy S6 Edge color, Green Emerald.  The Galaxy S6 Edge is a real beauty with its dual curved display with a premium feel and solid build.

The Galaxy S6 sports a 5.1-inch QHD Super AMOLED display with a resolution of 2560 x 1440 pixels and 577 pixels-per-inch (PPI) compared to QHD LCD display and 538 PPI on the LG G4 – the difference due to the display size.  Samsung made several changes on the Galaxy S6 Edge and they started by using their homegrown 64-bit Exynos 7420 octa-core processor, the first processor to use 14nm technology.  It has four cores clocked at 1.5GHz and four cores clocked at 2.1GHz.  A little more 'horsepower' than the capable 64-bit Snapdragon 808 hexa-core processor used in the G4 after LG passed on the Snapdragon 810.  The Galaxy S6 Edge is packing 3GB of the much faster DDR4 RAM and it comes with Samsung's new, faster, UFS 2.0 flash memory offering models of 32GB/64GB/128GB, although there is no room for expansion.

The Galaxy S6 Edge's camera uses a 16MP sensor with autofocus, LED Flash, a wide f/1.9 aperture, Live HDR and OIS.  This is without a doubt, the best camera Samsung has ever put in a smartphone and it scored the highest rating to date from DxOMark (they have not yet tested the LG G4).  Samsung increased the FFC to 5MP and they wisely added the f/1.9 aperture, Live HDR and added a 120-degree wide-angle lens for excellent low-light group selfies and video chatting.  The LG G4 camera area is also excellent, using a 16MP sensor, laser auto focus and a wide f/1.8 aperture, with a huge 8MP FFC.

The S6 Edge's 2600mAh battery is smaller than the 3000mAh in the LG G4, but it should easily get you through an entire day with moderate usage.  However, if you run into trouble, the new Samsung non-removable battery can charge up to 4 hours of usage in only 10 minutes.  If you are at work or coffee shop that offers charging pads, then you could also use the built-in wireless charger for either PMA and Qi formats.

The Galaxy S6 Edge has a few features not found on the LG G4 – it has a fingerprint sensor that is PayPal certified, it is Samsung Pay ready, and includes a heart rate monitor, an oxygen saturation sensor and built-in wireless charging for both Qi and PMA standards.  The dual-curved display offers several features of its own and adds that cool factor that is certainly not found on the LG G4.  It is running Android 5.0.2 Lollipop and will cost you about $300 on a two-year contract and $700 off-contract for the 32GB model. 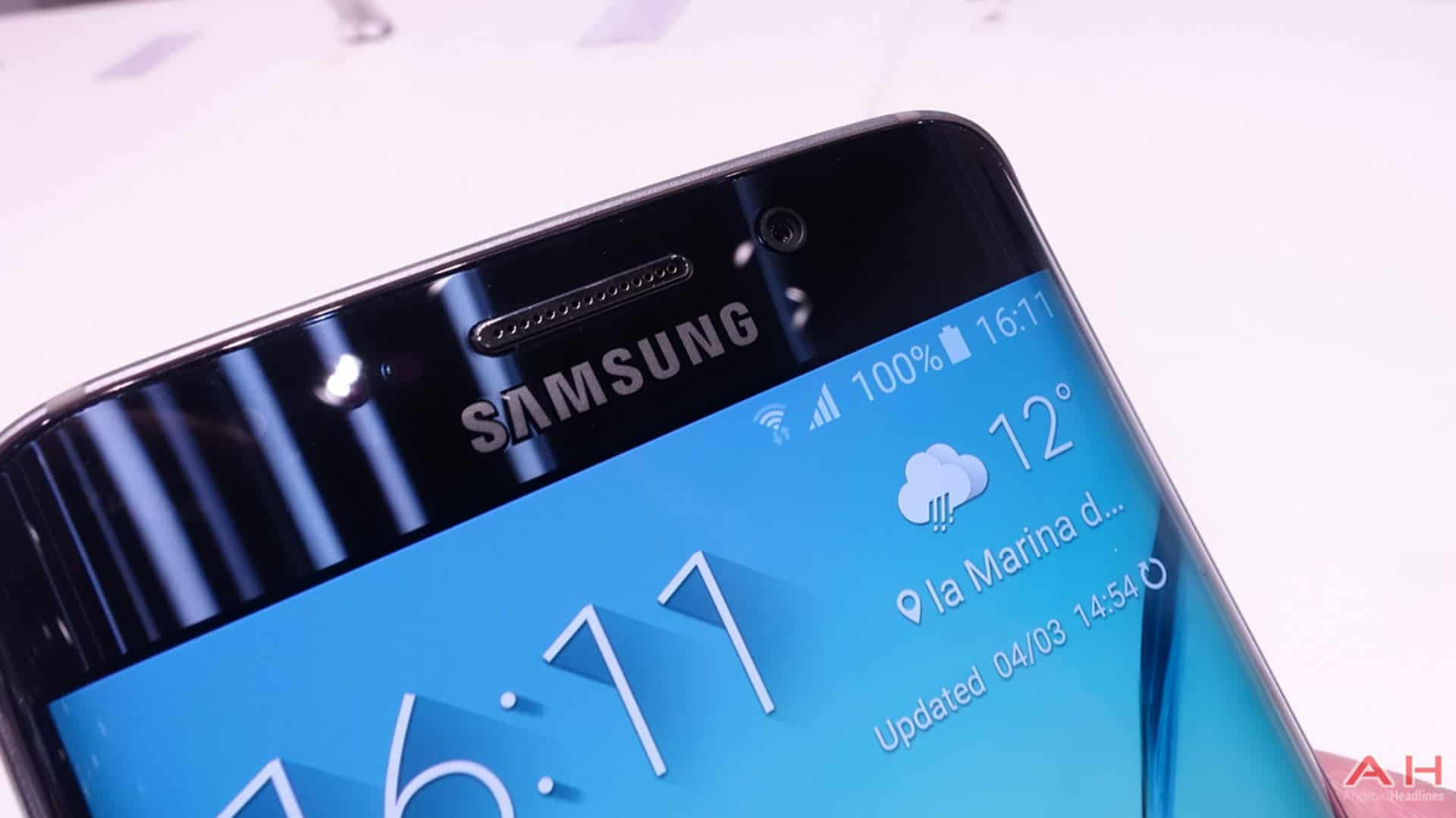 This is both a tough and easy one to pick – tough because it costs an extra $100, but easy because it is certainly the more advanced of the two designs – the winner is the Samsung Galaxy S6 Edge.

The LG G4 does have a larger display, but certainly not a better one, in fact the dual curved edges of the S6 Edge, simply make the display more awesome and offers extras that the G4 does not have.  The processor in the S6 Edge is more advanced in technology (14nm) as is the RAM (DDR3 vs DDR4) and the flash memory (UFS 2.0).  The camera area is every bit as good at taking pictures.  The S6 Edge is Samsung Pay ready, includes a PayPal certified fingerprint sensor, heart rate sensor, oxygen saturation sensor and wireless charging built-in for both Qi and PMA standards.

The LG G4 does have a removable battery, a microSD card to add extra memory and a built-in FM radio, but other than those three arguments, I cannot see buying the G4 over the S6 Edge.  The S6 Edge looks cooler, has better technology and a few extra features that are not offered on the LG G4 and therefore, I pick the Galaxy S6 Edge as the winner.  There are many loyal LG followers out there and if they chose the G4 they will not be disappointed – it is a great device.