It’s that time of year again, where the Summer brings a lull in device releases from the majority of the big names aside from Motorola. For the past two Summers now, Motorola has launched new lines of devices, carrying on into the Fall with new Droid products for Verizon. It would appear that this year isn’t going to be any different, and rumors of new devices from the now Lenovo-owned company are starting to appear. We’ve recently heard rumors of devices heading to Verizon, and now a Motorola device dubbed ‘Kinzie’, with a model number of XT1585 has appeared on GFXBench.

Devices often appear in the GFXBench database as their testing phase comes toward and end, but there’s always a chance that these benchmarks could be faked, especially when we consider that the GFXBench site offers up more info that many companies would like. This new device, dubbed ‘Kinzie’ has been benchmarked and listed with a Snapdragon 810 and a 5.5-inch Quad HD display. The inclusion of the latest Snapdragon chip isn’t surprising, going by Motorola’s close relationship with the company in the past, but the 5.5-inch display size suggests that this could be a new Droid phone headed for Verizon. With last year’s Moto X, Motorola were keen to deliver a device with a larger display, but that could still be used in one hand. For a lot of users, a device with a 5.5-inch display would simply be too large.

The XT1585 is also listed with 2.8GB of RAM and a 20-megapixel camera, which sounds like an improvement Droid Turbo to us. The device is running Android 5.1.1, which is hardly surprising for Motorola, a company happy to keep their devices as up-to-date as possible. Right now, there isn’t much known about this new device aside from a few specifications shared via the below GFXBench results. Either way, it’s hardly surprising that there’s a new Motorola device on the way, the only question is whether or not this is a Droid device for Motorola, or a larger Moto X. Hopefully, we won’t have too much longer to wait and find out. 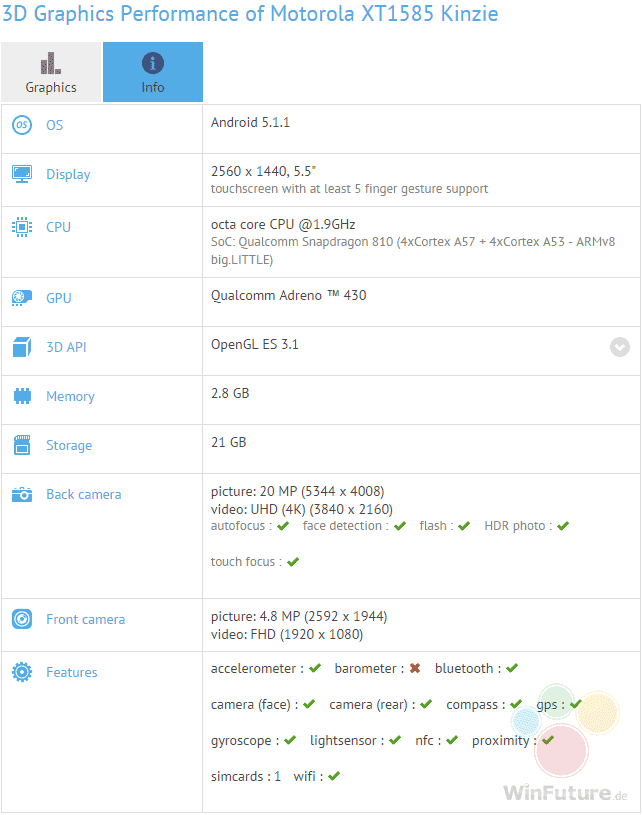