One of the very first aspects you witness while searching for a new smartphone has to be the display. Manufacturers are constantly looking at how they can innovate their handset devices to appeal within the general public. Much like televisions these days, it has become a battle to see which company can offer a thinner display and as little bezel as possible. Now smartphone manufacturers are following suit with a patent revealed that LG is looking to get rid of as much bezel as possible. In theory, we may start seeing smartphones that simply showcase an entire display within the front face.

Already LG has innovated with their smartphones by offering a curved display on the LG G Flex while also placing physical buttons completely on the rear of devices like the LG G4. Now LG has submitted a patent that reveals the entire front face of an upcoming smartphone to be nothing but a complete visual display that wraps towards the back. However, this isn’t the only smartphone manufacturer who is looking to eliminate these bezels. Apple recently filed a patent to also feature nothing more than just a display on the front face of an upcoming iPhone. Apple will reportedly also toss away their Home button which has been iconic since the very first iPhone released onto the market. Sharp’s Aquos, which came out into market for carriers such as Sprint, could even be added to the list of smartphones that feature as little bezel as possible. In fact, it was one of the more prominent features of the handset as it practically featured the 5-inch display completely from edge-to-edge.

Back to LG, the display, if used in an upcoming smartphone development, will have the top and bottom curved to the back of the handset. These areas very well could be used to feature different hotkeys or even virtual navigation buttons. Since LG has yet to make an official announcement of a smartphone that features nothing but a bezel-less display, there are quite a few details that are scarce about the matter. Patent’s often get filed and then nothing more is ever done to fulfill these patents into real working concepts. 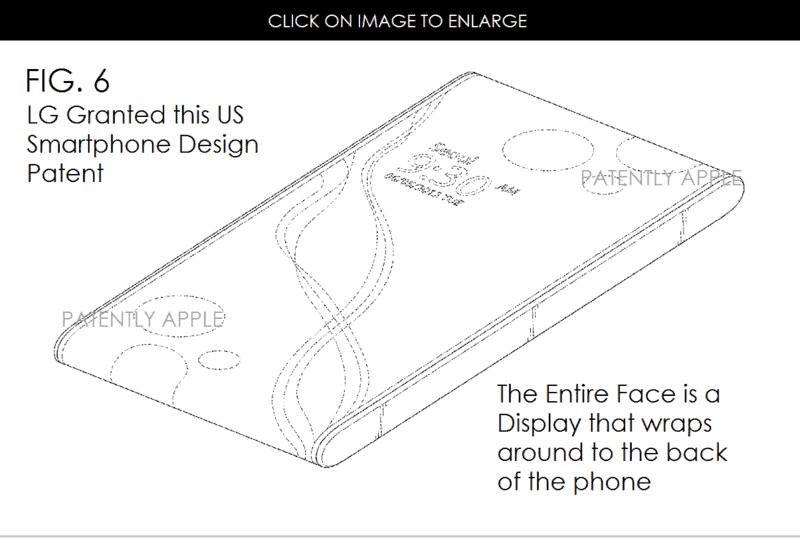