One of Samsung’s strategies has been to launch a wide range of devices covering every end of the specification range, from entry level devices to large screen and all manner of tablets with screens from 7.0-inch to over 12-inch and all sizes in-between. We’ve seen Samsung release the Galaxy A-series of devices, where the emphasis is on design and build quality rather than raw specifications. The Galaxy A (and Galaxy Alpha) handsets have tended to be less powerful and somewhat expensive compared with Samsung’s other handsets, but have beautifully thin chassis designs and a creditable “as good as one really needs” specification for the price.

Earlier today, reports emerged highlighting the new Samsung Galaxy A8 handset in a three-minute hands on video, where we got to see the A8 from every angle. At the time, the specification was discussed but since the video has been revealed, we have now seen the Galaxy A8 specification sheet leaked via Twitter, which confirms some of what we have already seen and adds some additional details. The device runs Android 5.1 Lollipop under the Samsung TouchWiz user interface. The processor is the Qualcomm Snapdragon 615 processor equipped with 2 GB of RAM and with 16 GB of internal storage. There’s a Full HD, 1080p resolution, 5.7-inch AMOLED panel. Around the back, there’s a 16MP rear camera and a 5MP front-facing camera for selfies and video calling. Furthermore, the chassis manages to only be 5.9mm thick but still houses a 3,050 mAh battery.

These specifications are somewhere between mid-range and high-end, but the A8 is not quite a flagship device. The Snapdragon 615 processor and 2 GB of RAM should ensure smooth multitasking and the 1080p panel at 5.7-inch across the diagonal is respectable – however the Samsung Galaxy A-series is more so much about the design than it is about the raw specifications. As such, Samsung is sure to emphasise the 5.9mm thick (thin) chassis and low weight of just over 140g. Unfortunately, at this time we do not have a release date, pricing information of market availability and we will need to wait for Samsung to officially confirm the device, although with the leaks coming through that might not be too far away. 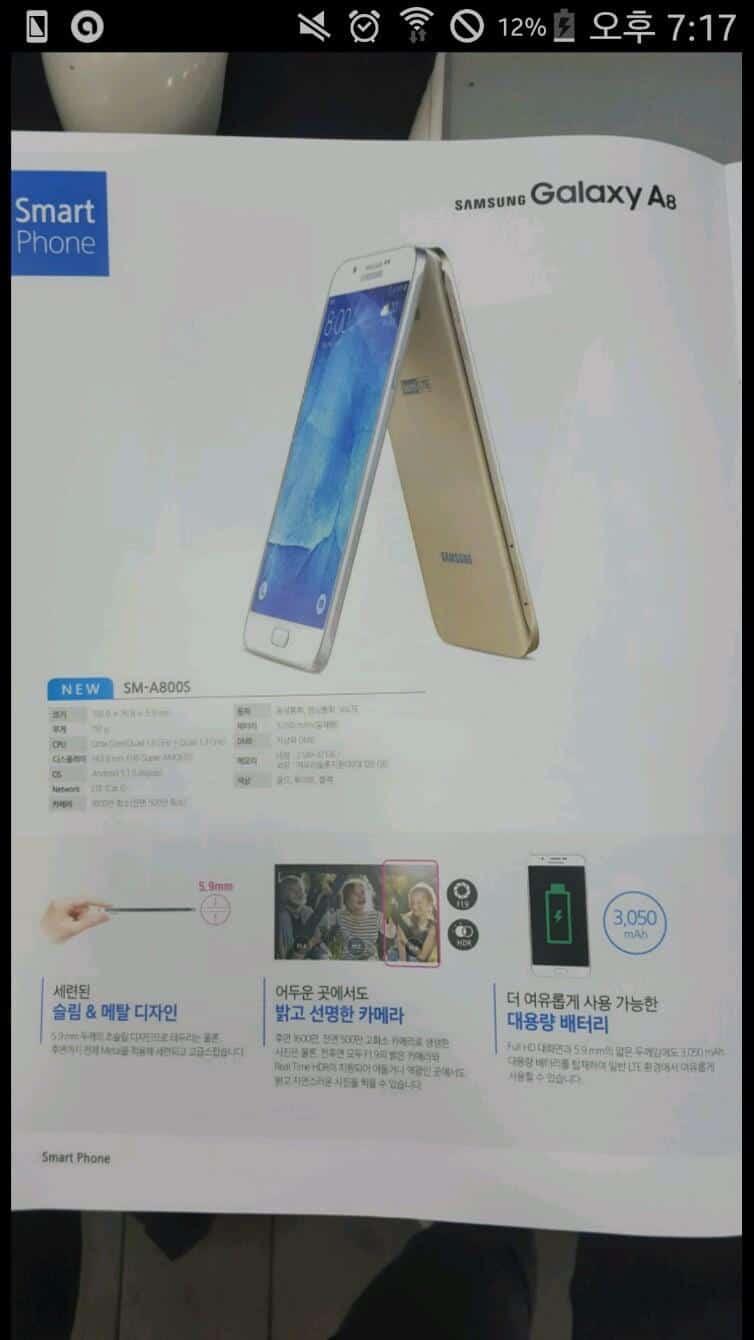