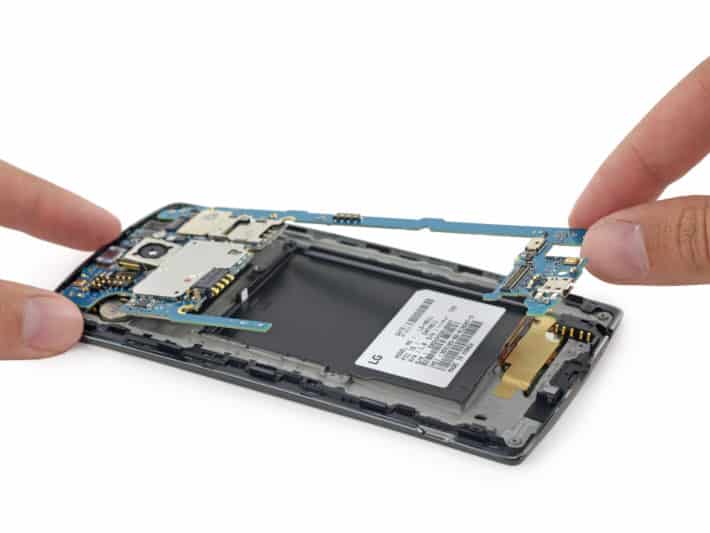 As they do with every smartphone, tablet and even smartwatch that gets announced and comes to market. iFixit has just finished up their teardown of the LG G4. There's not a lot that's surprising in this teardown from iFixit, however, they did give it a repairability score of 8 out of 10. The reason why it was given such a high score is that many of the parts inside the LG G4 are modular, and can be replaced independently. Additionally, the rear panel and battery can be removed with no tools. Now we knew the battery could be removed, as it is a removable battery, but the rear panel was a bit surprising.

What's interesting here is the camera module. Now we knew that the camera was probably pretty big, considering it has a 16MP sensor, OIS and all these other amazing features like aperture of f/1.8. As you can see in the images in the teardown, the module is quite large. They also shoot this one full of X-Ray's which looks pretty darn amazing.

So the LG G4 is pretty repairable, although we hope to never have to repair the device anyways. We want it to work perfectly forever. But at least it won't cost you as much to repair certain parts of the LG G4 compared to other smartphones. Typically, the iPhone and HTC One smartphones have the worst repairability scores from iFixit and that's due to the fact that neither have removable batteries or removable backs. Which is why the Galaxy S6 got such a low score this year, compared to previous years with previous models. While the iFixit teardowns don't usually help you out in repairing stuff – depending on what you need to repair – it is always interesting to see what's going on inside the device. And to see what parts are actually in there, other than what the company tells us they've put in their brand new device.

The LG G4 is now available on Sprint, Verizon, AT&T, and T-Mobile here in the US. It's a great smartphone, with probably the best camera available right now.