Google is primarily in the advertising business and most of their clients wouldn’t want it any other way…Google offers them tremendous exposure on the web and the possibility of obtaining new customers all of the time.  As more users start to do their searches on their smartphones and tablets, Google must come up with new ways to connect with the users and when users spend about 80-percent of their time within an application, it makes Google’s advertising mission even harder.  Add to that the fact that displays are smaller in a smartphone or even a 7-8-inch tablet, sometimes the simple task of clicking on an advertisement to either see it or close it becomes more difficult.

Advertisers were also getting after Google, as they were getting ‘charged’ by Google when customers accidently clicked on their advertisement in an effort to close the ad, not visit the site.  Google’s AdWords team estimates that up to 50-percent of the clicks are accidental and for advertisers, this artificially inflates their click rates and increases costs.  In Google’s latest update, they have incorporated three ‘fixes’ to help prevent accidental clicking on those smaller mobile displays.  These fixes not only decrease accident clicks, but also improve the conversion rates for advertisers and so far has shown an average 15-percent improvement in conversion rates.

Google’s first fix is to block clicks close to the image, but not on the image.  Google identified that the clicking area had to be more centralized and on the actual advertisement or image.  No longer will you be able to click on the border around an image by mistake and trigger a visit to the advertising’s website.  Secondly, and one of the easiest ways to miss-click has finally been fixed.  When there is an ad with an “X” button to close or dismiss the ad, the icon will no longer be ‘clickable,’ only the “X” button.  Finally, Google is adding a brief delay in “clickability” – in other words, when ads first appear, there will be a short delay once on screen before they become clickable.  This will give the user time to read the content and help eliminate accident clicks from users that may have been surprised by the ad popping up.  All-in-all, this should be a welcome update for both advertisers and users. 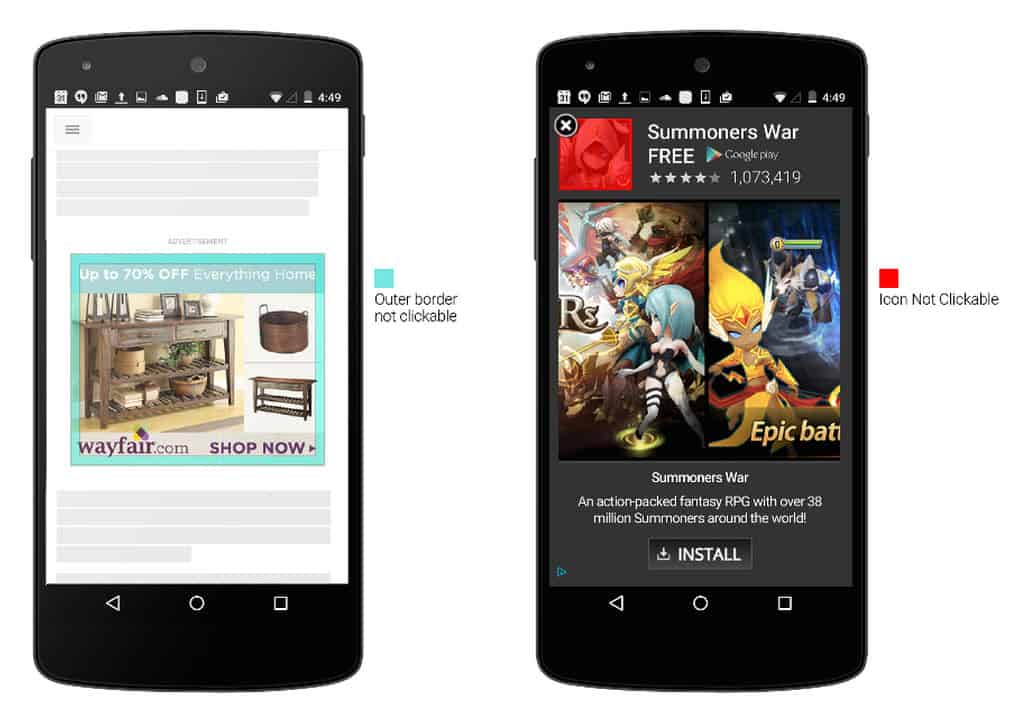