Google released its first diversity report last year, painting a dismal picture of a company, and indeed an entire industry, overwhelmingly dominated by Caucasian and Asian men. However, in doing so, it became a pioneer amongst tech companies to voluntarily release data on gender and ethnic diversity within its workforce. Since then, a bunch of other technology companies have released their own data, giving the public at large an idea of the small number of women and ethnic minorities working in the technology sector. Now, the Mountain View, California-based company has released the second installment of its proposed annual headcount, with numbers showing slight improvements, but are still a long way away from where the company itself would want them to be.

The recently released data shows that technology still continues to be a male dominated industry for the most part, with women forming only 30% of the company’s workforce. What’s even more disconcerting however, is the fact that the percentage of women in actual technology positions is a meager 18%, although, it’s still an improvement over last year’s 17%. However, the company did point out that 21% of the people hired in technology positions over the last year were women, as were 22% of all software engineers hired through the company’s campus outreach programs over the past year, compared to only 14% in the year before. The percentage of women in leadership positions currently stands at 22%, which is also very similar to last year’s 21%. The company also noted that the number of women attending its annual Google I/O developer conference has steadily risen from 8% in 2013 to 23% in the event held last week. As for more minority representation within its workforce, the company, whilst admitting that statistics haven’t changed since last year, claimed that hiring of African-American and Hispanic employees have certainly outpaced the company’s overall hiring rates. Currently, as much as 91% of the company’s employees are either white or Asian, with only 2% of its workforce identifying themselves as being African-Americans and 3% as being Hispanics.

Google had earlier said that it had spent $115 million on various initiatives in 2014 aimed at increasing diversity, including $3 million in the Anita Borg scholarship program for women. The company further stated that it plans to spend an additional $150 million this year towards its goal of a more equitable distribution of women and ethnic minorities within its workforce. Part of those initiatives include working with historically black colleges and universities. In a statement, Ms. Nancy Lee, Google’s Vice-President of Human Resources, said, “Early indications show promise, but we know that with an organization our size, year on year growth and meaningful change is going to take time. There isn’t a simple solution to solving the diversity challenges our company and industry faces, which is why we’re committed over the long run to work that spans efforts”. 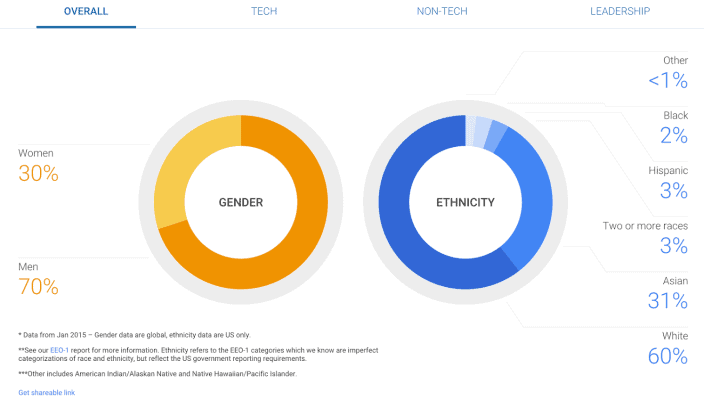