One of the really useful features that has emerged in the android world is the ability to cast. Using such a function means users can stream content to the screen size they want. Watching a video on your phone, then you can quickly and easily cast the screen to your big screen TV, so that everyone else can join in watching too. Same goes for Chromebooks, tablets and so on. In fact, it is a feature that seems to be continuously improving over time. Thanks to the advances in the release of products like Chromecast and Android TV devices, the ability to make use of Google Cast technology seems to be on the rise. Not to mention, Google have also expanded their Cast features to be more compatible with non-visual based content, like with their recently developed Google Cast for Audio.

Surprisingly though, there are still a number of apps (including Google's own ones) which still cannot cast properly. A prime example was rectified this week when Google announced an update to their presentation based app, Google Slides, which now sees Slides able to cast to bigger screens. Well, it seems Google are not quite finished with integrating Cast and are looking to make the experience far more native on Chrome OS. Reports are now emerging that Google are testing the ability of having Cast baked into Chromebooks (and presumably other Chrome OS devices). At present, the feature is reported to only be available on their Canary channel (the most bleeding edge channel) of Chrome OS, although, it is also now expected to possibly hit the developer channel soon enough. The feature allows users to literally cast their Chrome OS screen directly to another device without the need to use an extension or add-on, which is the case at the moment.

For those wondering how this will work, the image below shows a prime example of the feature in action. The familiar cast icon will be (presumably) permanently in view on the Chrome OS/Chromebook menu in the bottom right corner. By clicking the icon, any and all cast enabled devices nearby will be shown and able to be connected to. This essentially means the whole Chromebook will be able to be cast, without having to keep a browser window or Chrome app open. At present, there is no official word on the feature or when it will land and as such, if you are on the dev channel then you might just find it happening in a new update. 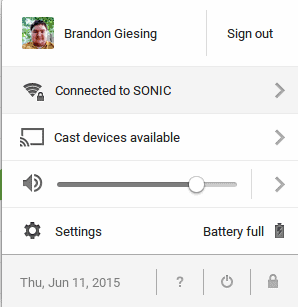