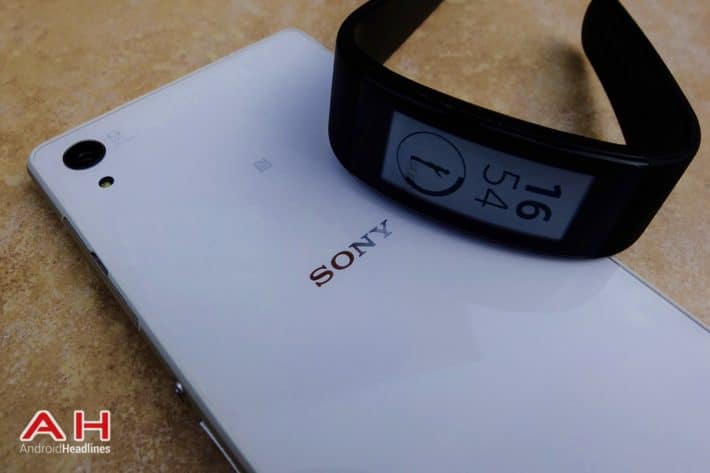 Last year was the year that we saw Sony enter the wearable technology space in earnest with the Sony SmartBand, the Sony SmartBand Talk and of course, the Sony SmartWatch 3. As I found out reviewing the original SWR110 SmartBand last year, Sony's approach to fitness tracking was more of a low-key, more relaxed one. Through their LifeLog app, Sony wants to give you relevant information, allowing you to see what you spend too much time doing, how active you aren't and just making it as clear as possible what you need to change, and why. It's a pretty interesting concept, and extends beyond just exercise into the apps and services you use and basically everything you do in your life.

The SmartBand Talk is a more advanced version of the original that Sony launched last year, and while it's been around for some time now, we've only just got our hands on one. With the Summer getting started, it's not a bad time to consider something like the SmartBand Talk. This time around, Sony have given us an eInk display to show your progress, the weather, notifications and other handy little tidbits. Plus, there's a speakerphone inside of this little guy, allowing you to take phone calls on your wrist while out on your run, or on the move. Bridging the gap between smartwatch and fitness tracker, can Sony's SmartBand Talk satisfy a large audience? 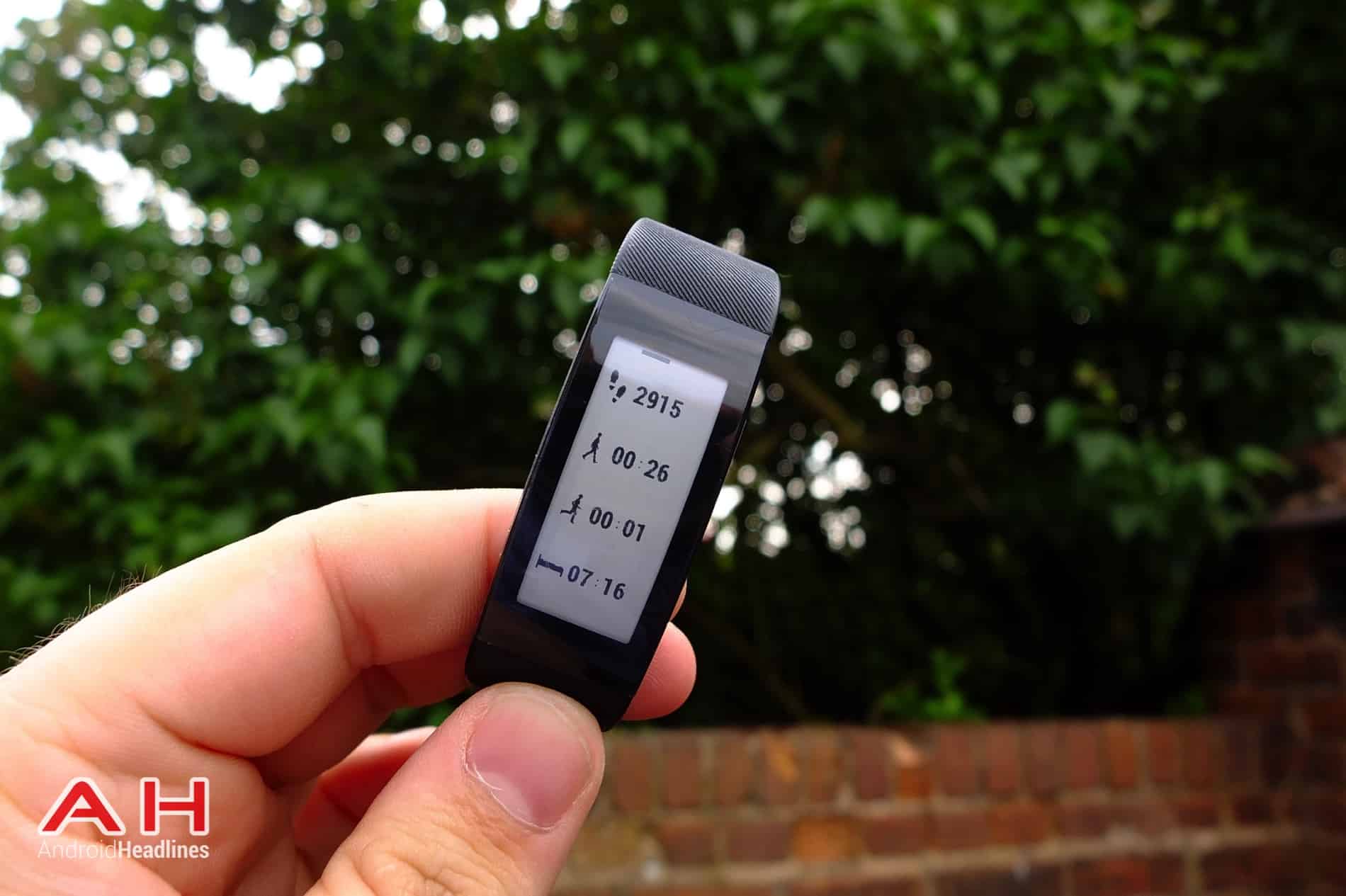 A key feature of the SmartBand Talk is in its name, and it does indeed work as a speakerphone of sorts. It actually works a lot better than you might think something on your wrist would, and provided you're not in a super-loud environment, it's perfectly loud enough and there's a dedicated volume rocker available whenever you need it. People I spoke to in a quiet environment said that I sounded no better or worse than when using my Xperia Z2, but as soon as there was more than say, a medium amount of ambient noise, I was apparently hard to pick out and in some cases hard to hear over the background noise. Still, for something that sits on your wrist it's more than an admirable feature, and it genuinely works.

The 1.4-inch eInk display is ever-so-slightly curved in line with the main body of the tracker itself, and you can configure the face to display all sorts of information. It will display the time along with other small pieces of information, or you can just have it display the weather all the time. Cycling through apps is done using the main button and it is very handy to see your step count, hours slept the previous night and other readouts without touching your phone. We'll go into the apps and LifeLog a little later on though.

Battery life is admirable as well, and while Sony says you get about three days' worth of battery life out of the SmartBand Talk, I was consistently getting four to five days. 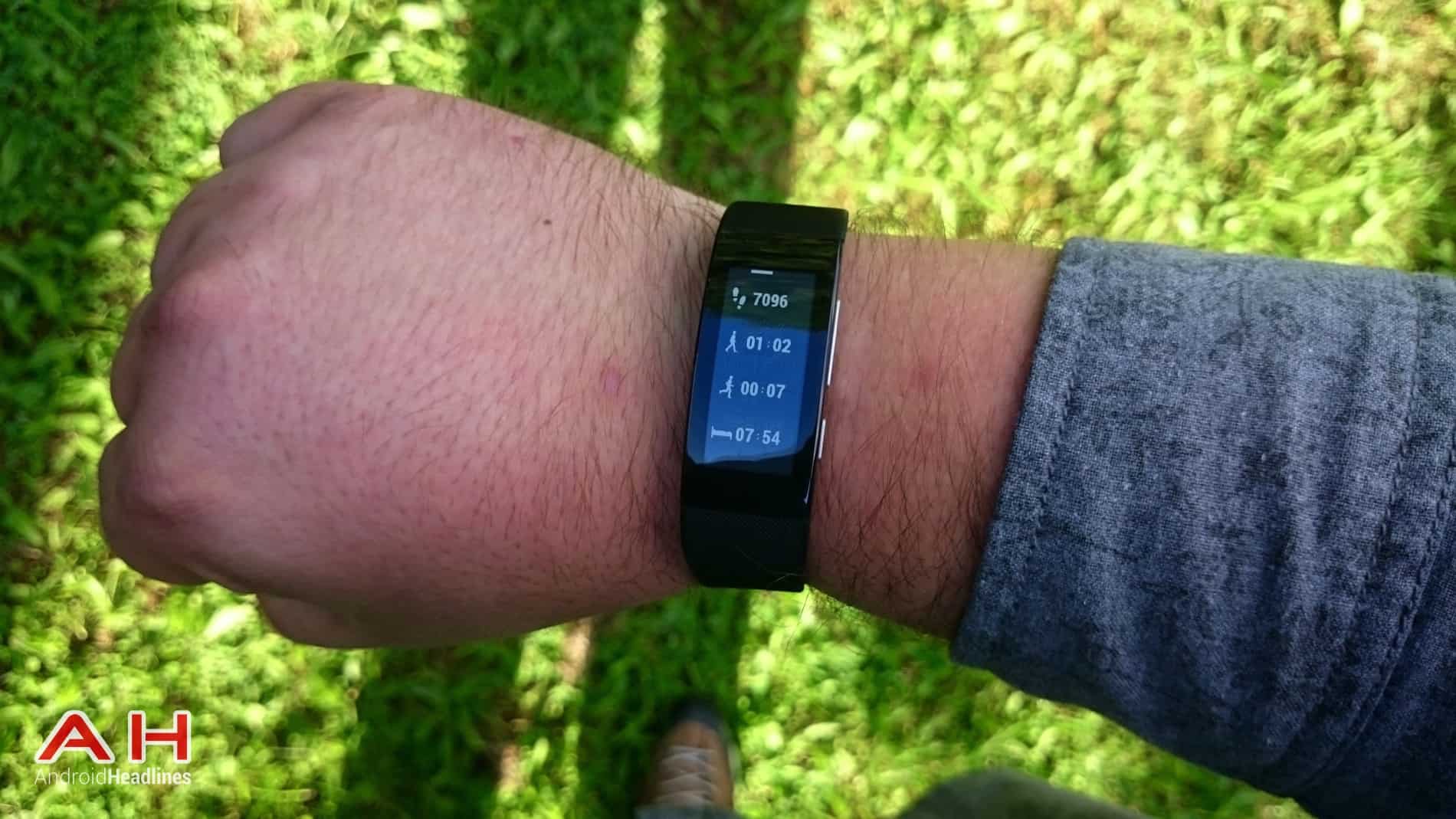 As far as looks go, the SmartBand Talk isn't much to write home about, but it's far from offensive either. Compared to the original SmartBand, the Talk is a little chunkier and definitely feels more substantial on your wrist, however it is very light. I'm glad that Sony understands that wrists aren't circles, and the strap and display body rest on your wrist really quite nicely. I have pretty large wrists, with some padding to spare, and I had to use the "M/L" band however, I was a little disappointed to see that Sony weren't providing one of each in the packs, as they did with the original. As for customization, there's sadly not that much of it. You can change the straps to a number of different colors, but you cannot change the center color, leaving you with either black or white to work with. This is unfortunate, as the original SmartBand was fully interchangeable and blended well with whatever it is you were wearing.

Overall, the SmartBand Talk isn't the best-looking fitness tracker out there, but it's really quite comfortable and it doesn't stand out as others would. I do wish that it was easy to change the overall color, but I understand that the center console has to be 100% contained to keep everything water-resistant. 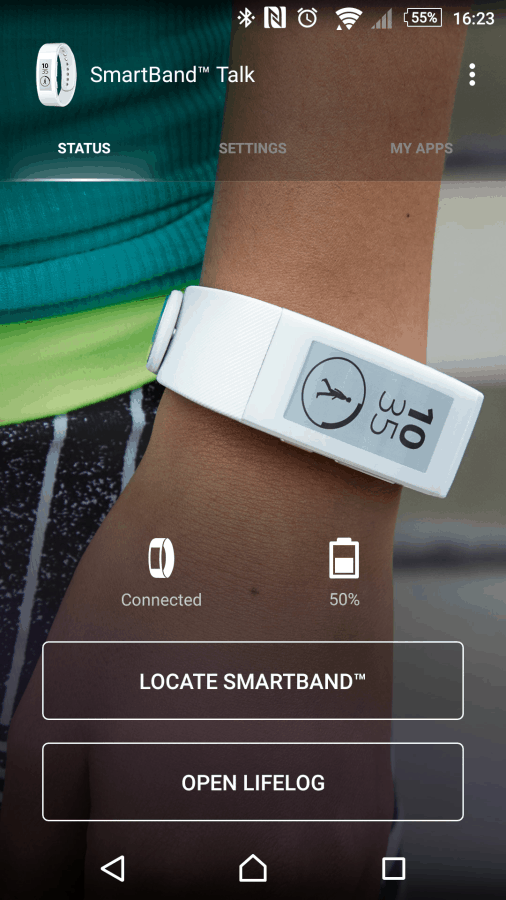 The Sony SmartBand Talk app is really quite easy to work with. It provides quick and easy setup instructions, as well as information about battery life and connection. One thing that's nice about the app is that Sony has thought of mostly everything here. Including which wrist you're going to wear it on, and which color you want the eInk display to be. 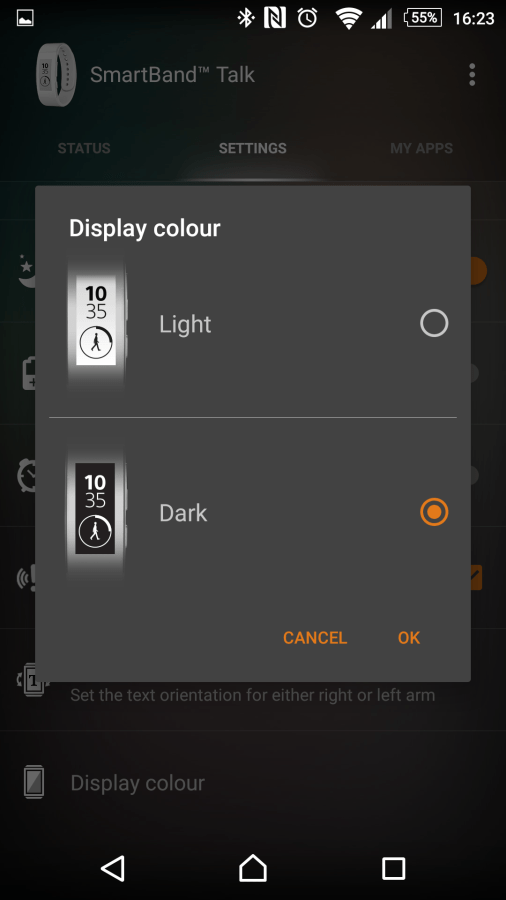 There are a number of different settings you can toggle on or off where notifications are concerned, as well as alarms and such. From these easy yet varied toggles, the SmartBand Talk quickly shows its versatility. 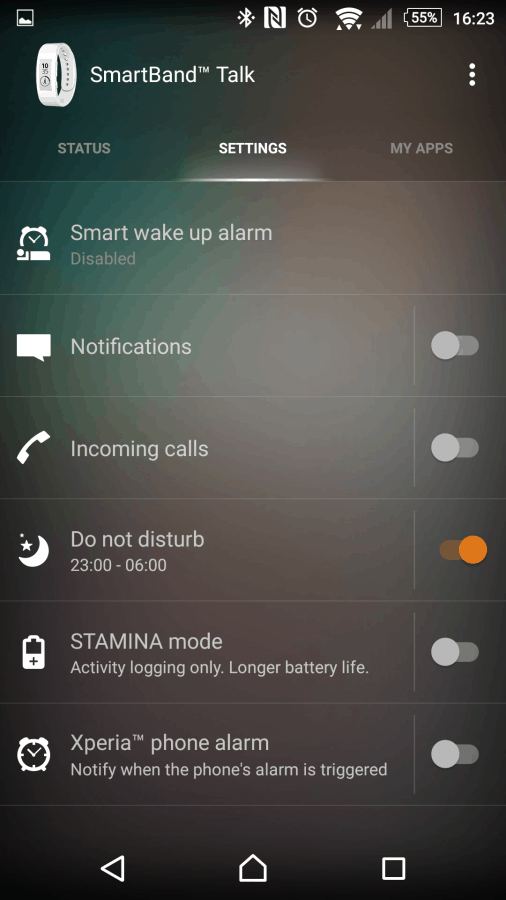 Sony calls the face on the SmartBand Talk a "watch face" which I suppose it is, seeing as it displays the time much like the Pebble or other smartwatch would. Below is a taste of what you can do with the settings, it's very reminiscent of the SmartWatch 2 app if anyone is familiar with that.

The SmartBand Talk app is refreshingly simple, there are few – if any – hoops to jump through and there's a decent selection of apps, which are more sort of like widgets, that you can use on the unit itself to get different info and such while on the move. Although, in practice they are a little fiddly to work with on the band itself. 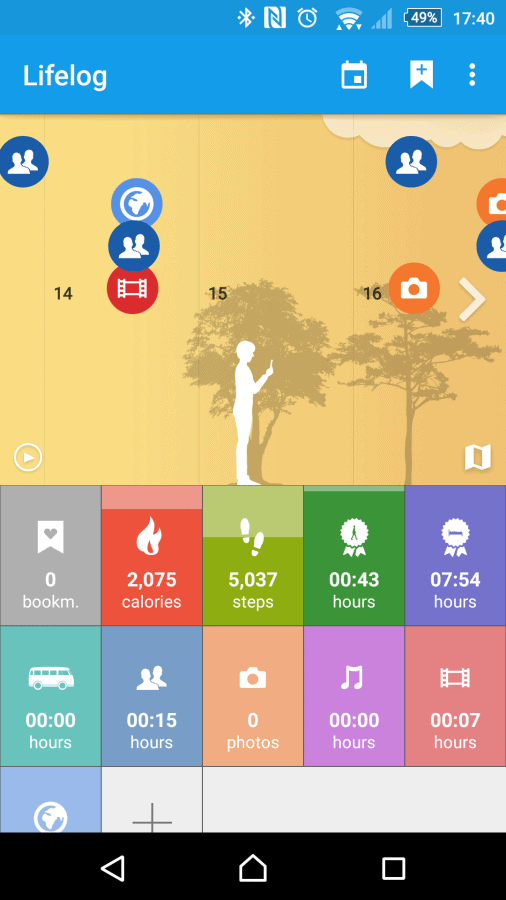 The star of the show here with the SmartBand Talk is still LifeLog. It's an app from Sony that well, logs your life. It breaks down all of this information from 24 hours a day into neat little categories as well as timeline of your week that can scrub through. Using the SmartBand Talk, you'll get information like how long you spent walking, how many steps you took and of course, sleep tracking. We really shouldn't need to say this, but as Samsung locks the Gear Fit to just Samsung devices it's worth noting that LifeLog and the SmartBand Talk will work with anything running Android 4.3 or above.

Overall, LifeLog is a great way of bringing all this data together. It goes beyond just fitness tracking and lets you know how much time you wasted on social media or on YouTube and the bigger a bubble is, the more you did of that one thing. It all works quite well, aside from music listening which didn't track any listening in TIDAL or Google Play Music unless I was actually in the app.

Step tracking and sleep tracking wise I felt were fairly accurate, and I did the same 1.1/1.2 mile walk a number of times and the walk down the street to the store over a three-week period, with okay results. The step counts varied a little each time, but it still gave me a decent baseline to let me know how long I was walking and I got a decent look at how many steps I took. I would say however, that the SmartBand Talk is more susceptible to logging activity when there really isn't any. The original SmartBand is something I wear every day, and that did a great job of being very realistic. If I was at my desk I wouldn't log any steps, however the SmartBand Talk shows activity of 60 – 120 steps at times where I basically never moved at all, aside from some typing and mouse action.

I like the SmartBand Talk, I think it's a decent bridge between fitness tracker and smartwatch however, there are a few oversights on Sony's part. For instance, the way you change the bands isn't very elegant and I wish that it was a little thinner. Still, Sony understands that wrists aren't perfect circles and I never once experienced any pain, and from the pictures you can see I have pretty large wrists with some padding to spare.

For those in the mood for a low-key fitness tracker that has more added value, the SmartBand Talk is a good option and the ability to see your progress on your wrist is very, very handy indeed. As is the speakerphone, which works much better than you think it would, but ultimately I can't see many people using it in public, at least not yet, anyway. This is a solid option from Sony, it does much of what people want, without taking things too seriously, as well as offering users more functionality without a massive footprint on their wrists.