When Samsung announced the Galaxy S4 Active two years ago – along with the Galaxy S4 Zoom and S4 Mini – many of us wondered who would buy the Galaxy S4 Active. Evidently enough people did buy it, seeing as AT&T and Samsung have done a Galaxy S5 Active and Galaxy S6 Active now. This phone is, obviously, targeted at those that need a rugged phone. Whether they work in construction, or are just clumsy. While it may be one of the ugliest looking phones, to some, it means less shattered displays for others.

Samsung came back with another Active model this year, once again exclusive to AT&T. And there are even less specs and features missing compared to its brother. Although it does have a much larger battery which everyone loves. We've been using the Galaxy S6 Active for about a week now, so it's time to put all our thoughts into a review. Let's get it started. 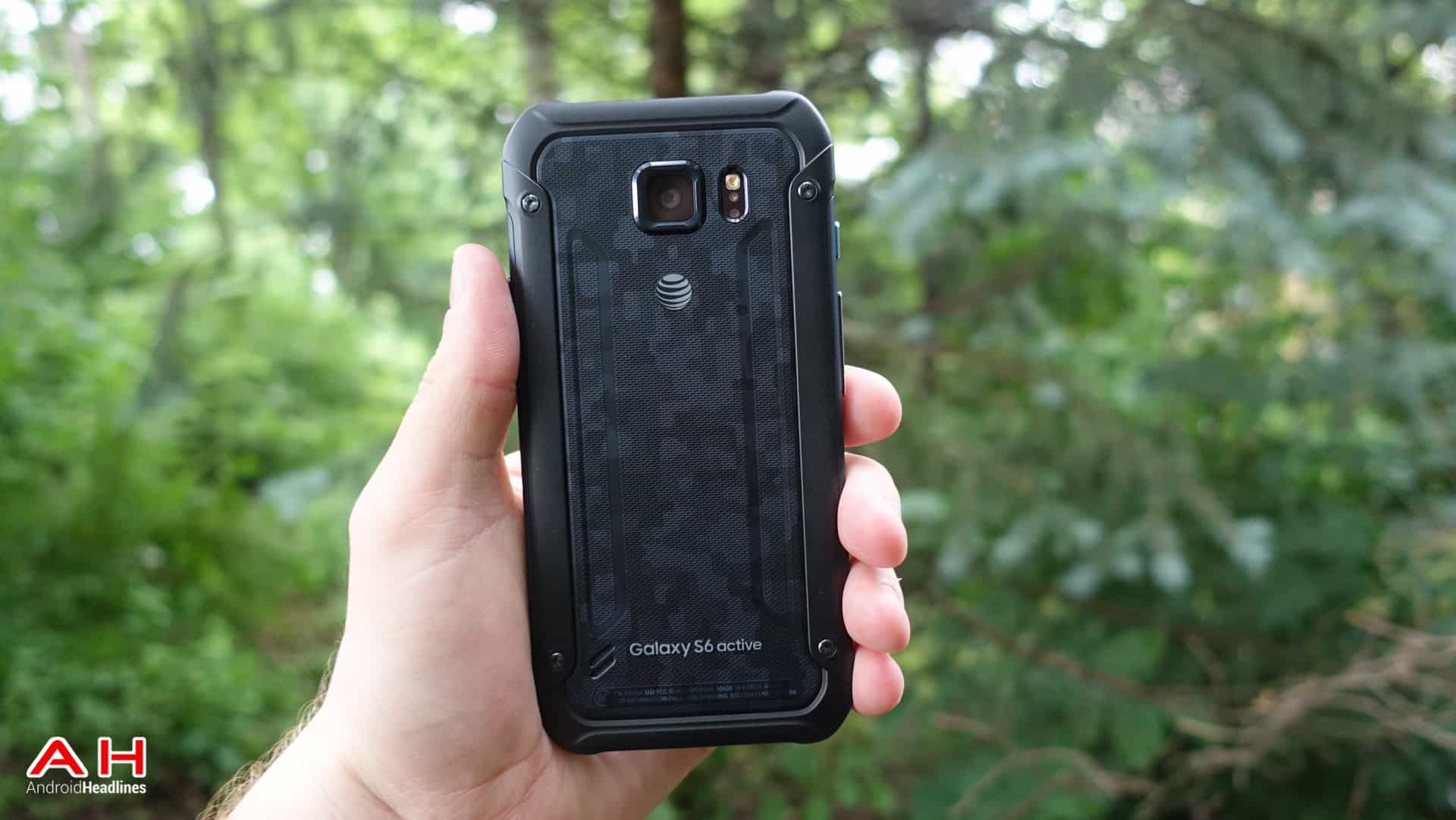 If you've owned, or at least looked at the Galaxy S4 Active or Galaxy S5 Active, it shouldn't be a huge surprise here, but it's plastic for the most part. With some decent sized bumpers on the corners. Of course, Samsung and AT&T brought out some camo models, which are in blue and white. There's also a plain black color. We have the blue camouflage here, obviously. While it doesn't look as pretty as the Galaxy S6, it does feel good in the hand and doesn't feel slippery at all. That's always more important, at least to me, then the way it looks. Last thing you want to do is drop your $700 smartphone. Even if it is rugged.

The specs are largely the same as the Galaxy S6. Including the Exynos 7420 inside, 3GB of RAM, 32GB of storage – there are no options for  64GB or 128GB this time around. The display is even the same 5.1-inch Super AMOLED 2560 x 1440 resolution panel. Which looks insanely good. As with previous Active models, Samsung has added an extra shortcut key on the left side. Which by default is used for Activity Zone. But you can change that in the settings to be for anything you want. Including any app you download. I personally like using it for the camera. 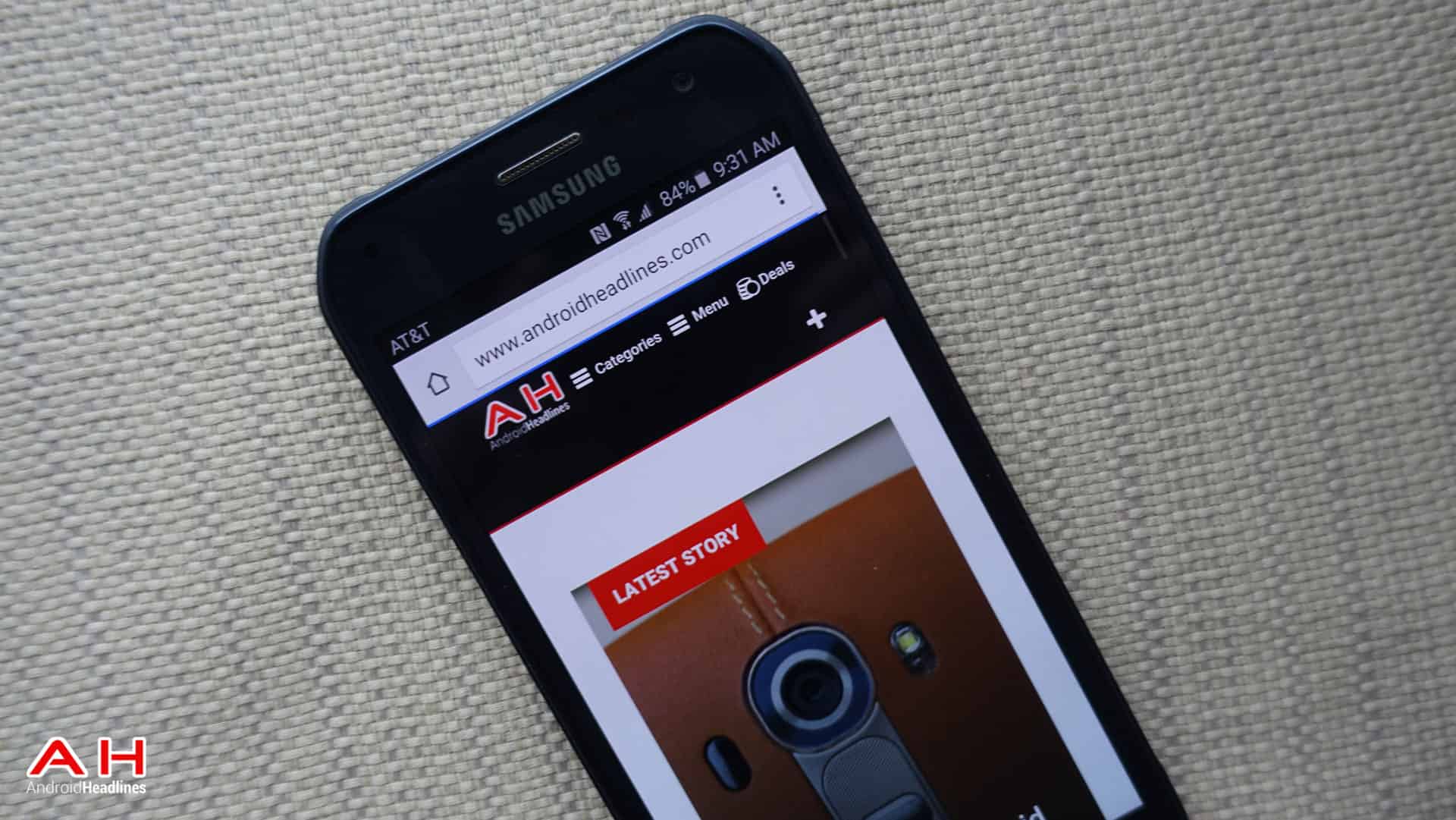 Inside we have an Exynos 7420 with 3GB of RAM, so it's pretty speedy, as we saw on the Galaxy S6. Everything seems to be right on par. We didn't notice any slow downs at all when using the device. However, one thing we did notice is that network speeds seem to be a bit slow. Now this could be a software issue that gets fixed in a week or so, but it's still worth pointing out. Doing a speed test, I was getting about 30mbps on my home WiFi, which every other device gets almost 60. And AT&T's speeds weren't all that great either. 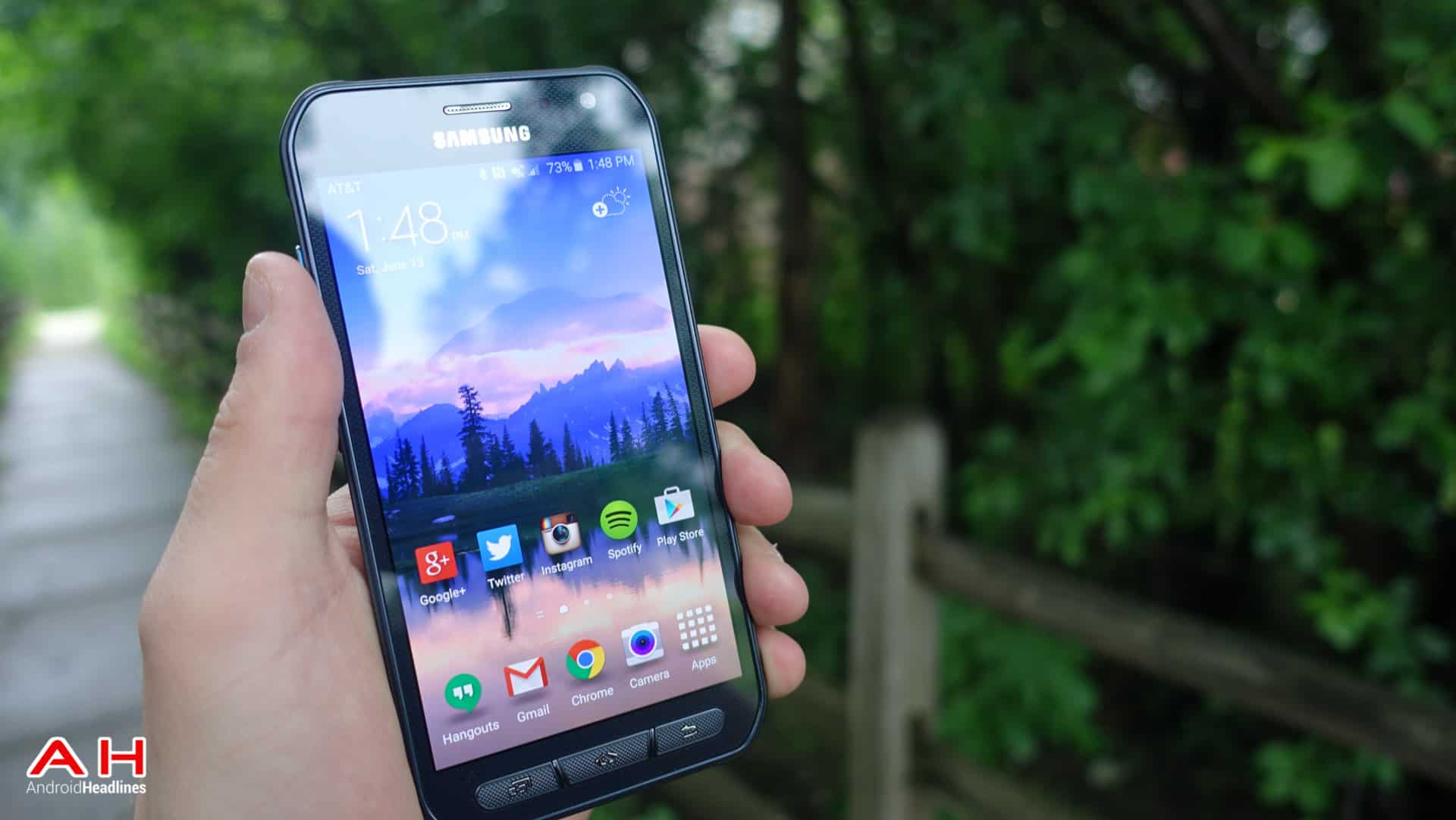 It's gorgeous. I haven't been a fan of AMOLED displays, but this AMOLED display is just gorgeous. It is the same exact panel as used on the Galaxy S6. It's really great for watching video and other media as well. As much as I've said I'd prefer a 1080p screen, I think I'd prefer a QHD one now. Thanks Samsung. 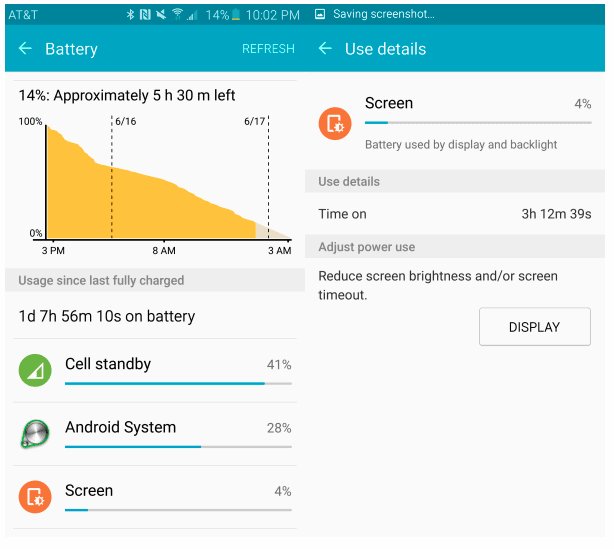 This is the one everyone wants to know. The battery is almost a full thousand mAh bigger than the Galaxy S6 and it shows. The Galaxy S6 Active can easily last me two full days. Now that obviously depends on what you're doing, I got about 3 hours on screen over 31 hours off the charger. This included WiFi and AT&T's 4G LTE network. It's still quite good, and pretty much blows away what Samsung has in the Galaxy S6.

While not everyone uses a phone in the same way, I'm comfortable in saying that I think everyone should be able to get a full day's use out of the Galaxy S6 Active. 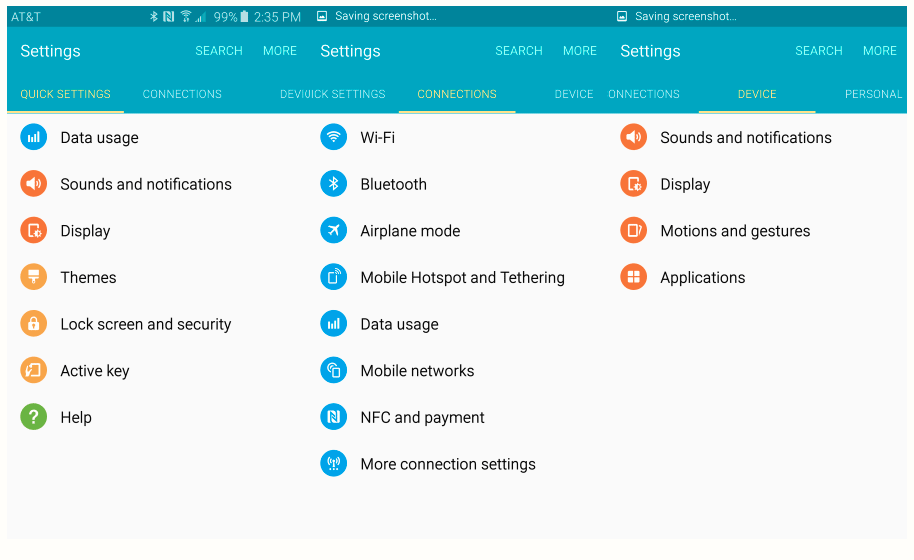 The software on the Galaxy S6 Active is largely unchanged from the Galaxy S6. Although there are a few changes that have been made. One of the bigger ones, or more noticeable ones is the Settings app. It appears to be a bit more material design this time around and dare I say, closer to what LG has done with the LG G4's settings app. You can still add up to 9 quick settings, which you use most often. That's always a big feature, especially when there are so many settings inside the app already. 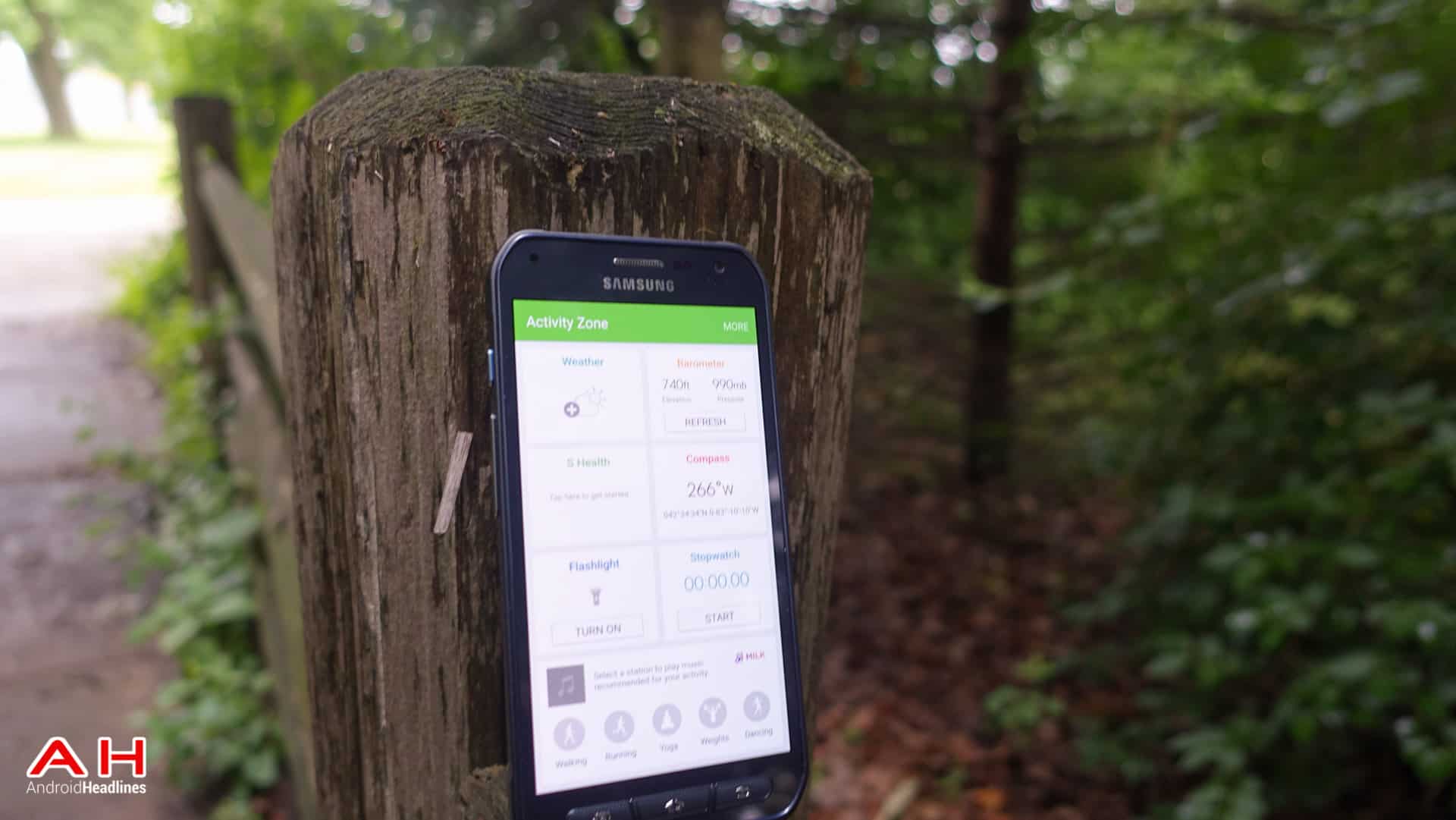 Another feature that is on the Galaxy S6 Active is the Activity Zone. Now this isn't really new, per say. As it has been on the Galaxy S5 Active previously. In the Activity Zone, you have the weather, the Barometer, S Health, Compass, Flashlight toggle, Stopwatch, as well as Milk Music integration at the bottom. By default, long-pressing on the Activity Zone button on the left side, opens music. However, as we mentioned above, you can change both the short press and long press options.

Otherwise, you can expect a pretty much identical software and user experience as compared to the Galaxy S6. Which isn't a bad thing, TouchWiz got a pretty big upgrade this year and it's much lighter than in years' past. 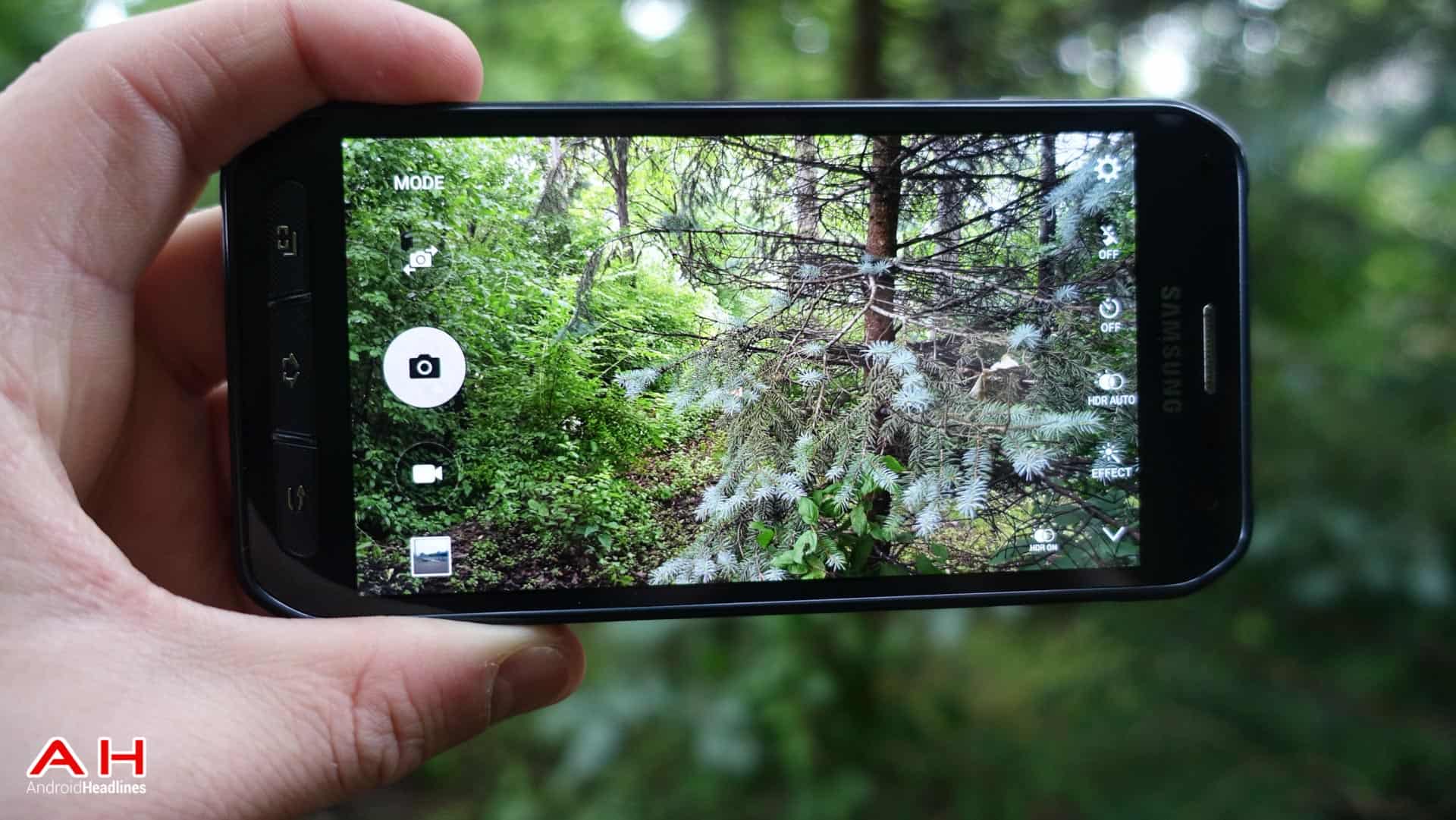 Samsung gave us the same 16MP camera that was in the Galaxy S6, and it shows. It continues to take amazing pictures. In the gallery below are a few samples taken from the Galaxy S6 Active, all in relatively different lighting situations. The Camera UI is very familiar as well. in the center of the bottom row is your shutter button, with the button to flip cameras to the left, and video camera on the right. There are also plenty of modes including Pro, Selective focus, panorama, Slow Motion, Fast Motion, Virtual Shot, Aqua, Tag Shot, Sports, and many more available in their App Store that you can download. 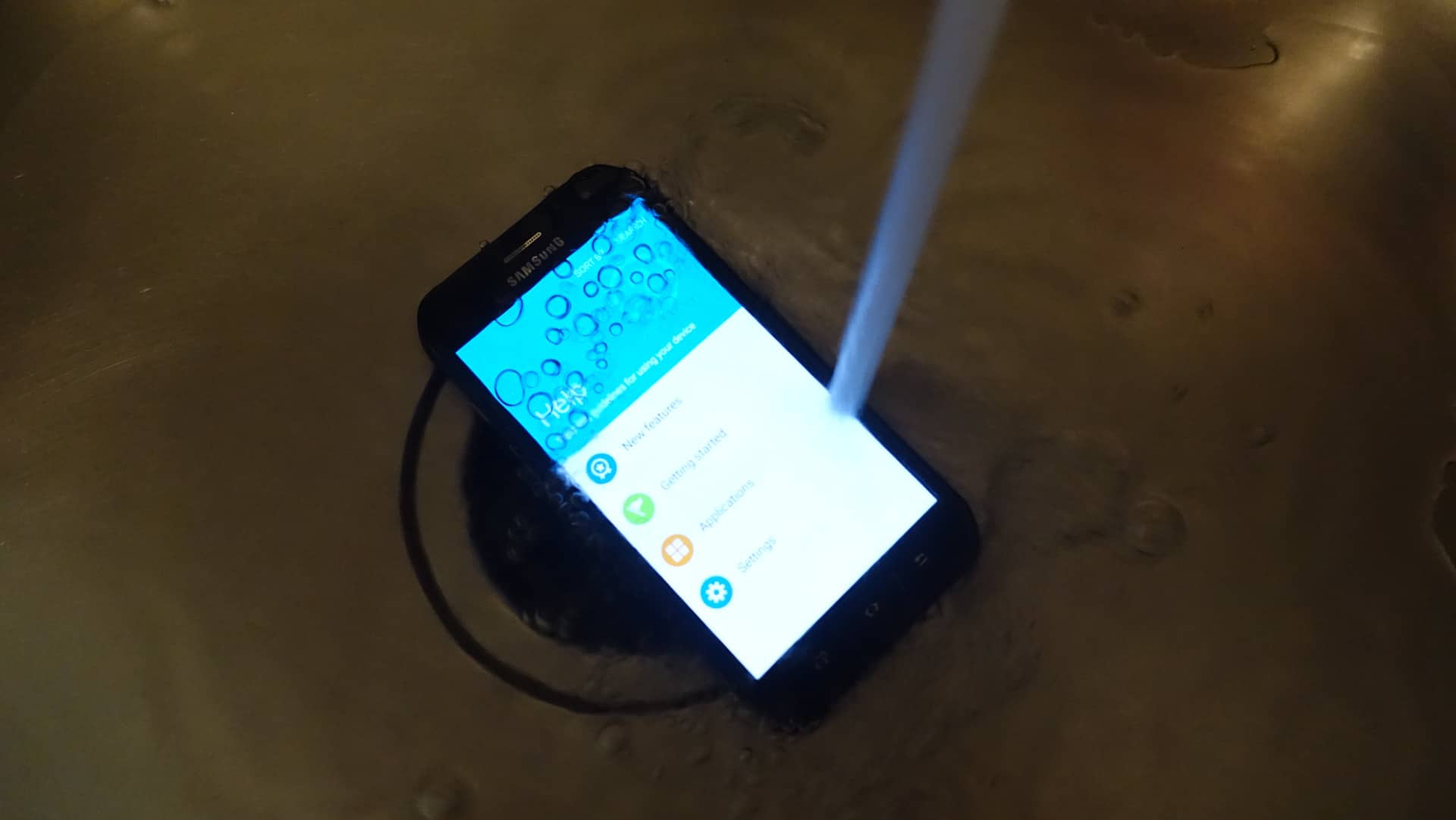 Many ask why we need an Active variant of the Galaxy S6 or any other Samsung flagship? Because it's rugged. The Galaxy S6 features paired with a much larger battery, and waterproofing. Much like the Xperia Z4 or Xperia Z3+, there's no flap on the microUSB port this time around and it's still waterproof. You may also remember with the Galaxy S5 Active and Galaxy S4 Active, that users were having issues with water seeping inside the removable back. There's no removable back this year, so that's not an issue.

Advertisement
Trusted By Millions
Independent, Expert Android News You Can Trust, Since 2010
Publishing More Android Than Anyone Else
25
Today
171
This Week
171
This Month
1446
This Year
111549
All Time
Advertisement