Huawei held their first proper U.S. device launch this month which saw the release of their mid-range version of their P8 flagship device, in the form of the Huawei P8 Lite. Along with the P8 Lite, Huawei also took the opportunity to launch their latest fitness tracker/Bluetooth headset in the U.S., the TalkBand B2. As the name suggests this is a follow-up device to the previous TalkBand B1. The latest version sees some improvements on the design and functionality of the device and comes priced at $179.99. The TalkBand B2 is currently available through Amazon as well as Best Buy, other select retailers and through Huawei’s own shopping channel GetHuawei.com. 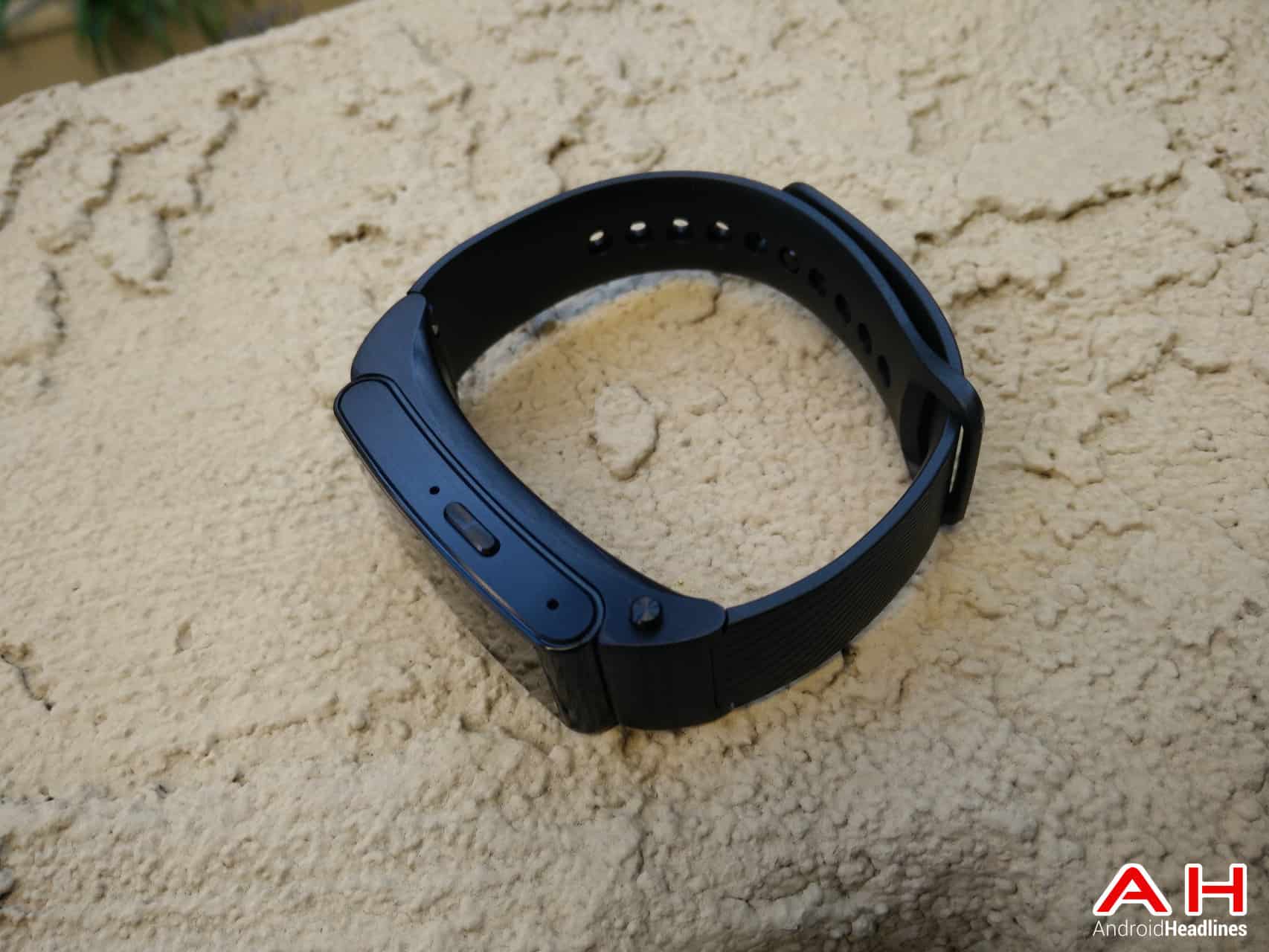 One of the criticisms the TalkBand B1 received when it first launched, was that it looks a little too much like a fitness tracker. Although, that sounds strange to say (as it is a fitness tracker), the criticism was that it looked a little too plain, basic and more toy-like than the serious piece of tech that it was designed to be. Therefore, with the TalkBand B2, Huawei looked to mature the presentation of the device and make it more serious in nature. On the surface, they have managed to do this. The TalkBand B2 does look significantly better than the predecessor and adopts a much more wearable feel to the device. In fact, in some respects it looks much more like a watch than a fitness tracker. Which is likely to be welcomed by those looking for a more discreet device. 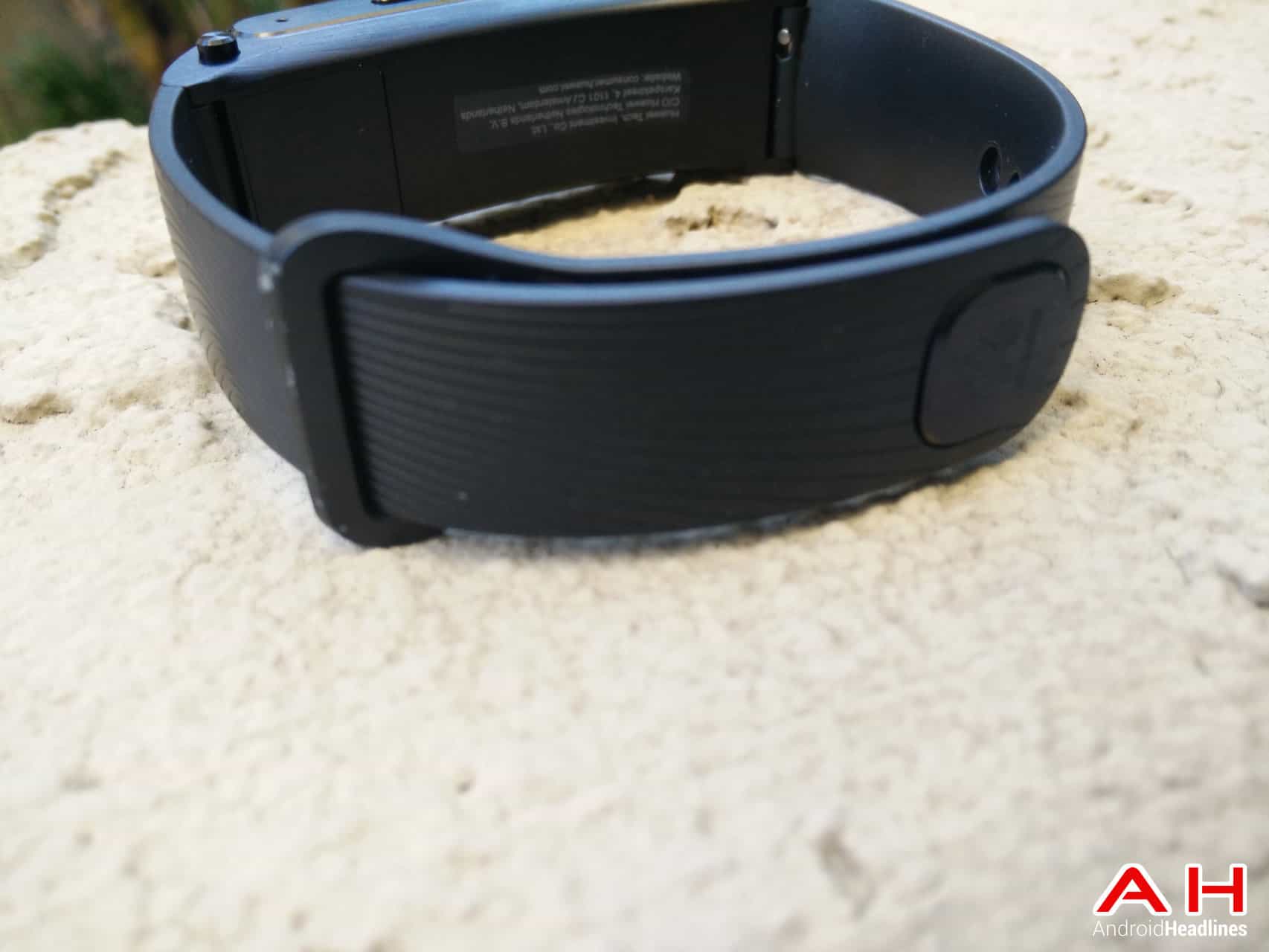 That said, it seems not all TalkBand B2’s are created equal. Huawei has released the B2 in a few design formats. Namely, the gold and silver editions are what really highlight the improved design and more watch-like look and feel. In particular, the gold version comes with a leather strap which again highlights an enhanced premium look. The other option, the black banded version, feels less of an improvement in comparison and largely consists of a rubber band, which in truth, is not massively dissimilar to the predecessor. It is worth pointing out that the silver version of the B2 sits somewhere in between the other two with the premium aspects of the gold for the main face unit but adopts a (white) rubber band like the black option. 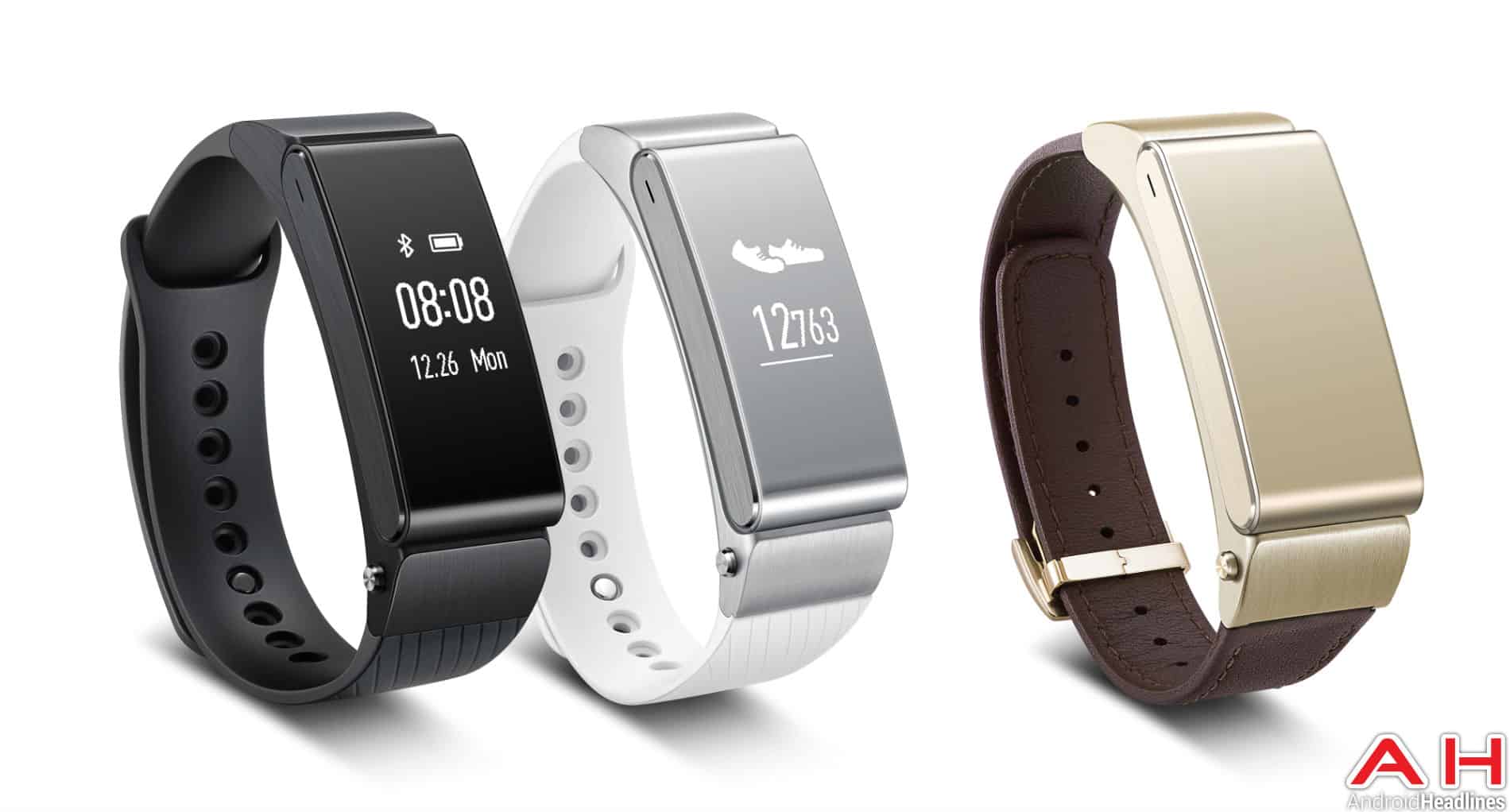 Either way and whichever one you do are more inclined towards, the build and design of the TalkBand B2 is significantly improved and will illicit much more of a watch feeling when wearing than the more bracelet feeling normally encountered from other fitness trackers. In terms of the strap, there were no major issues with the design. The strap is Huawei branded on the clasp and comes with multiple adjustment holes so you can adjust the strap to your particular wrist size. The strap also adopts a slightly textured feel due to the design. 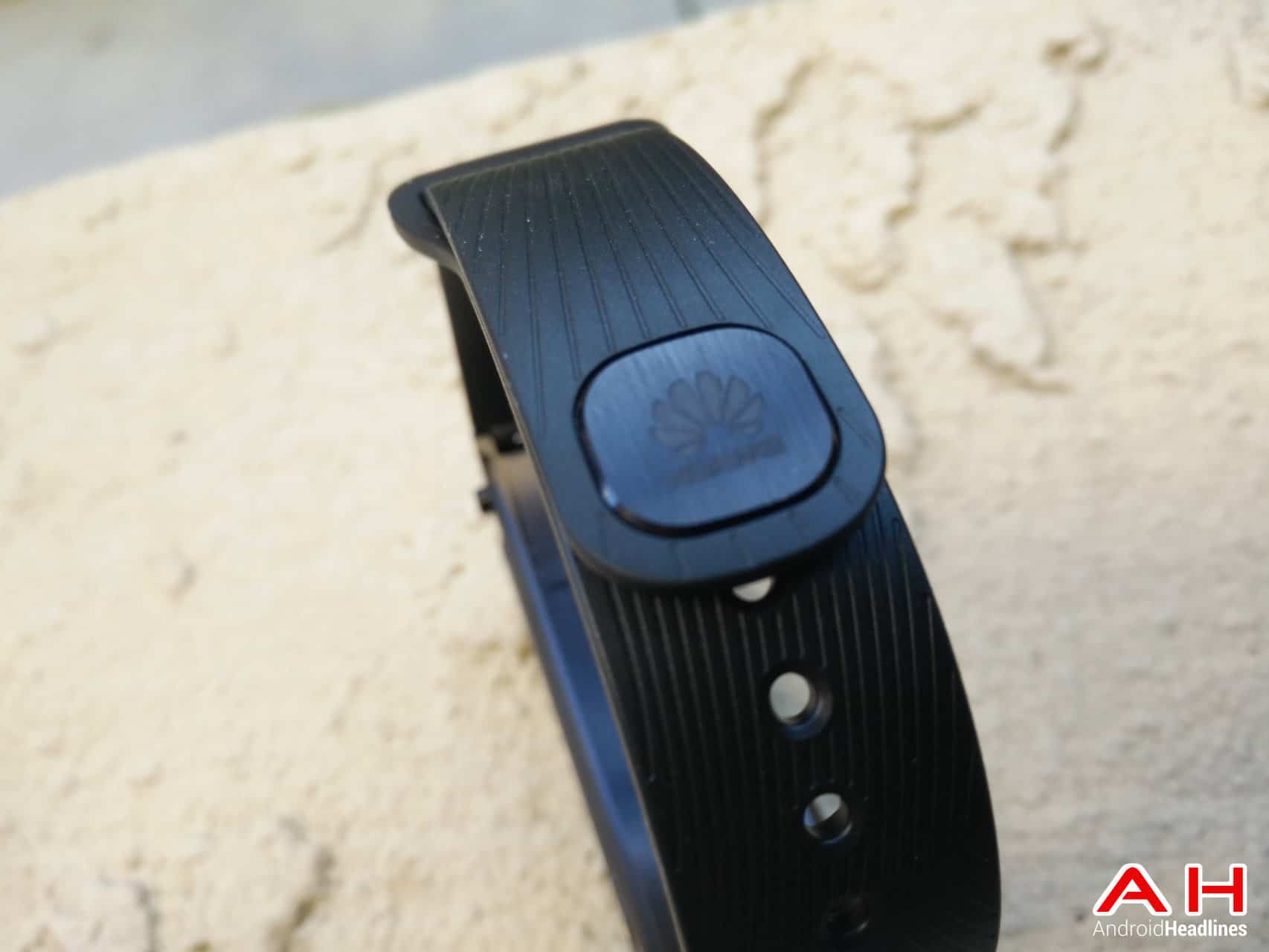 Moving to the headpiece (main unit) and similar to the B1, this is a removable unit. In the removed form, the B2 headset works as a Bluetooth headset for call making and taking. This is where the biggest design improvements are noted, as the head unit is significantly better designed than it was on the B1. The unit pops out of the band by utilizing two small buttons (one on either side) and snaps quite snugly back into place when reinstalling. This again is another area which has seen much improvement since the B1. On the B2, the headpiece snaps in and out of the band much easier and in a more user-friendly manner. 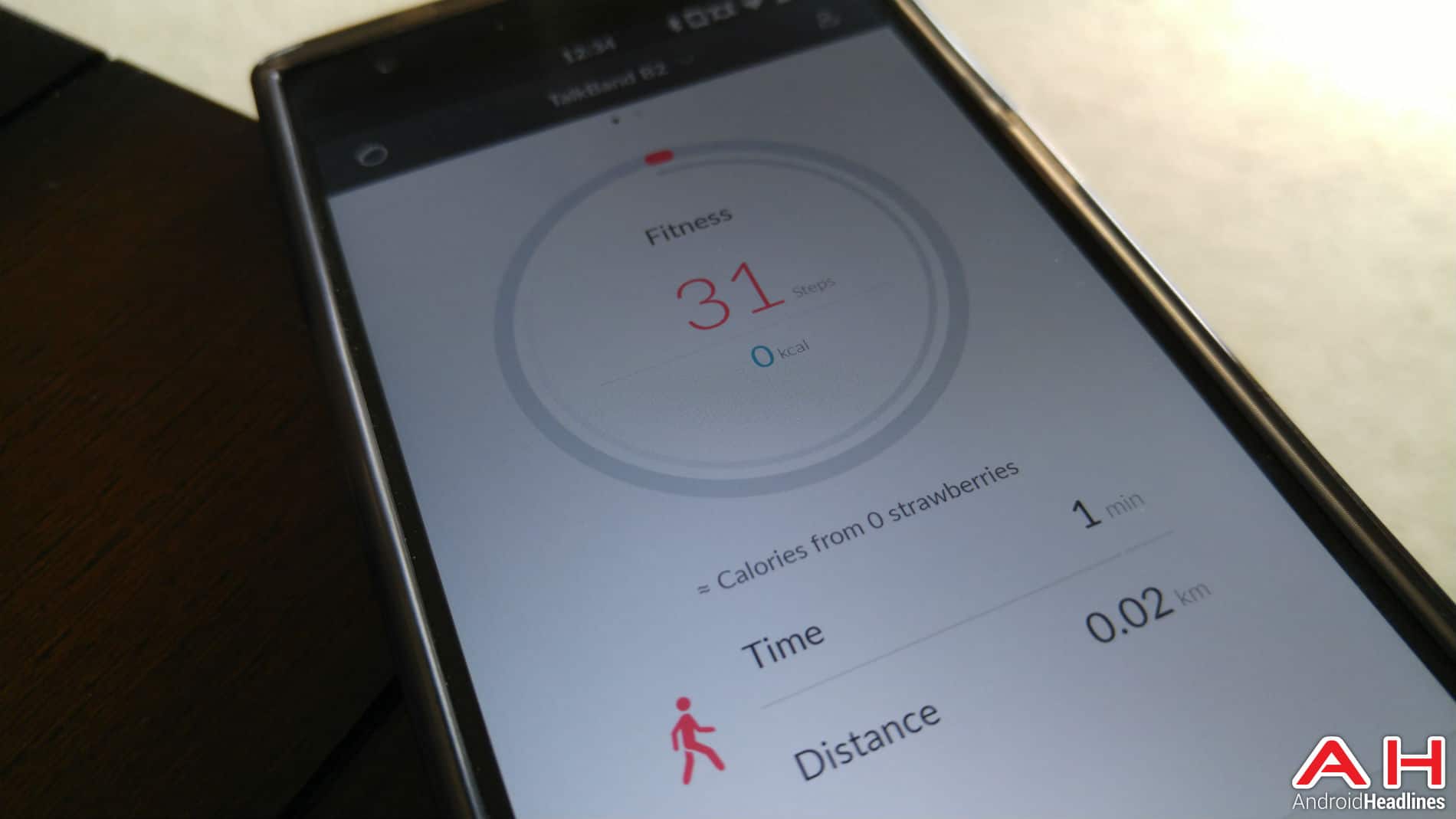 This is a fitness tracker. It is a dual functional unit thanks to the Bluetooth headset feature, but the primary purpose of this device is the fitness tracking and therefore, should be the most important. Once again, this is a feature which seems to be infinitely more user-friendly than the original TalkBand B1. The software used to make use of the B2 is the Huawei Wear app which is available to download from the Play Store. Once downloaded, the app immediately prompts you to pair the app with a device. Without a device, the functionality of the app is extremely limited. Pairing was relatively easy and once paired, the app was able to provide basic information on the wearable, including battery life remaining and so on. 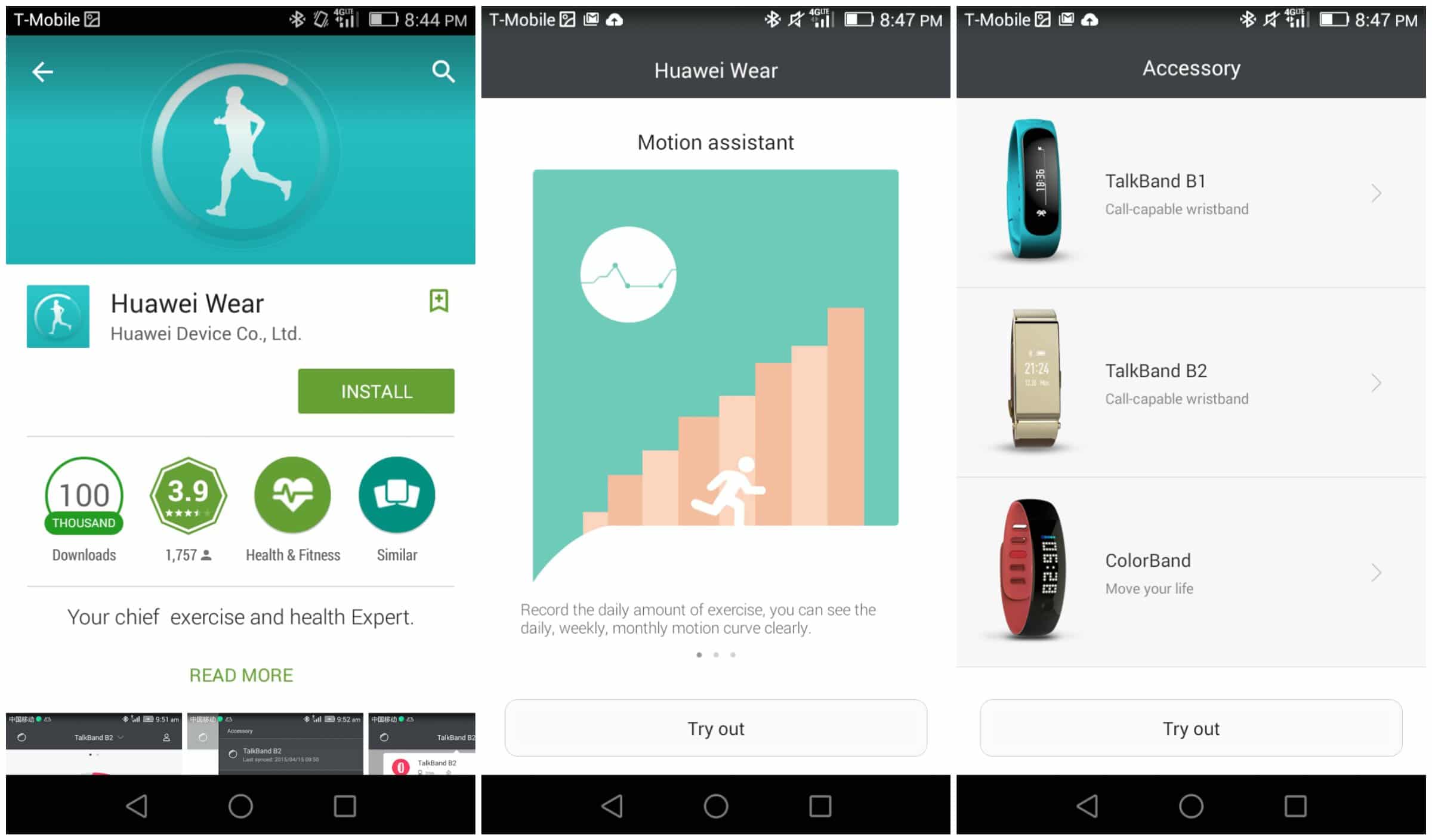 In terms of tracking, the B2 has also seen some improvements in its general functionality. The B2 is able to track steps, sleep and calories burnt. In terms of the steps, the B2 is further able to identify the difference between walking and running and therefore, is also able to adjust the calorie burn to best represent the style of exercising. Not to mention, it can also identify additional sports like cycling and mountain climbing too. There were no major issues when tested in this respect and the accuracy of the TalkBand B2 was excellent and certainly on par with many of the leading fitness trackers. Steps were monitored regardless of the intensity of exercise (or just walking around the home) and both the B2 and the app were constantly in sync in terms of the numbers without any issues noted. 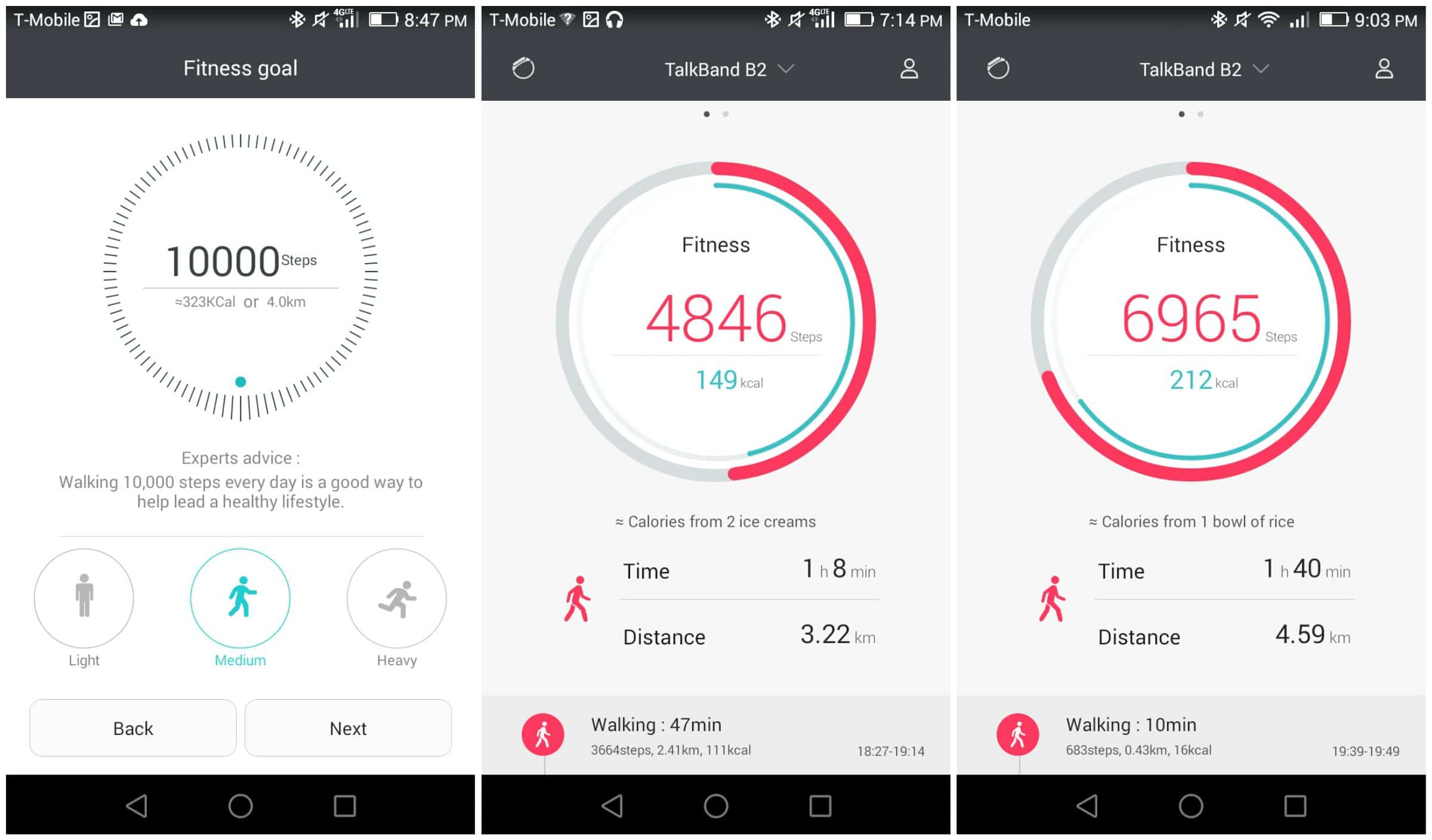 Likewise, the sleep monitoring of the B2 was also pretty good. Over the course of testing, the B2 was able to effectively monitor sleep cycles for both long and short sleep periods. Not to mention, the app provides slightly more detailed information on sleep, including how long you remained in deep sleep compared to light sleep and of course, your overall sleep duration on a daily basis. One interesting feature is that it tells you if you have had a ‘bad’ sleep (presumably not long enough) which is probably not what you want (or need) to hear after an actual ‘bad’ sleep. Either way, it does provide you with brief analysis of whether your sleep was bad, normal or good so you can get a more overview idea of your sleep patterns. 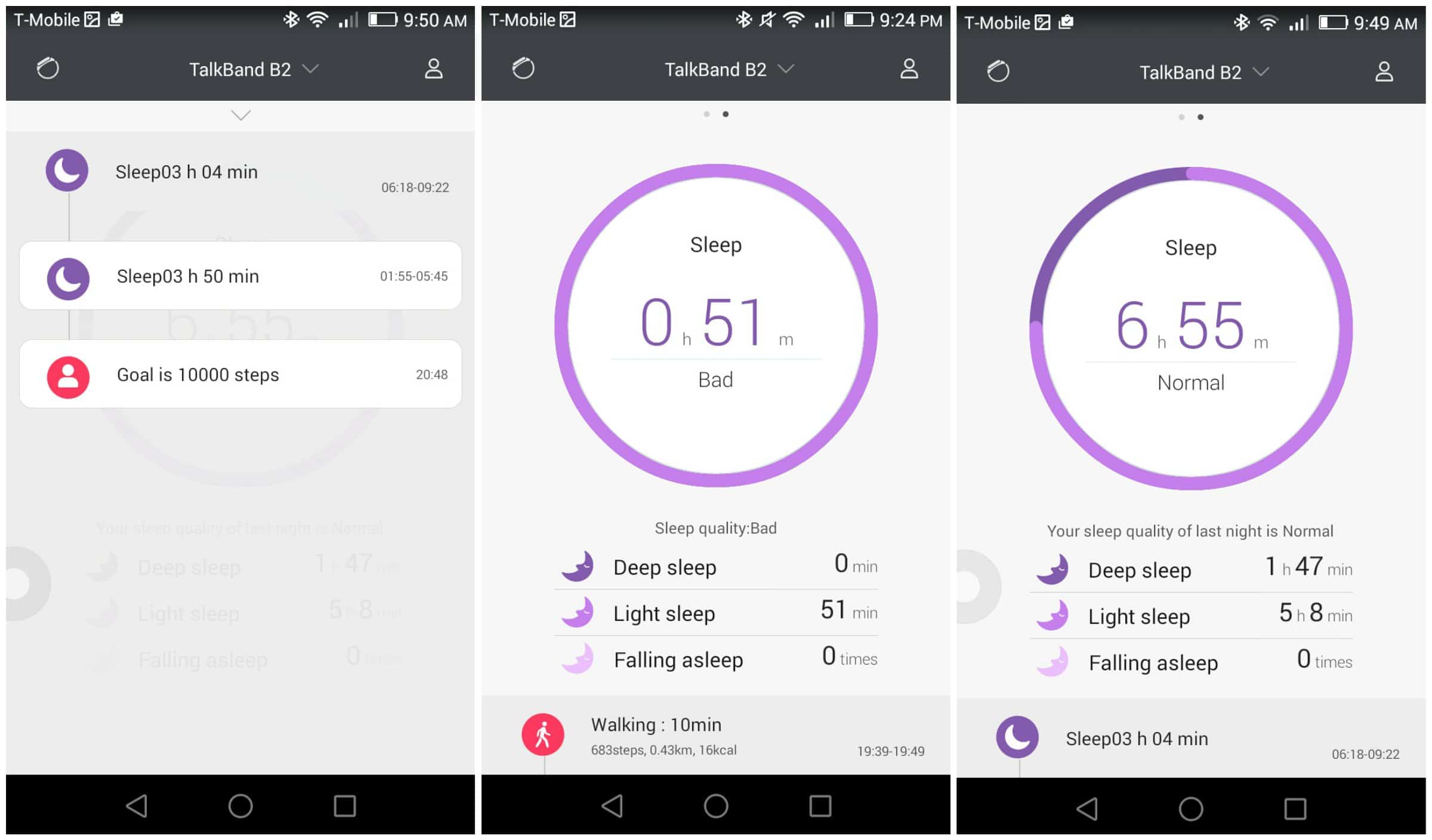 In terms of the UI running on the TalkBand B2, this is where things get a little more basic. The UI is limited to a few screens which the user can scroll through. These include screens offering details on the calories burnt, distance walked or sleep times. Likewise, the UI offers the ability to choose the time of main clock face which is on show. These ‘theming’ options are limited, but at least does offer a choice of faces. It also lastly worth pointing out that on the software front, Huawei have teamed up with Jawbone and as such, the device can be used to highlight your stats and figures using the Jawbone UP platform. Although, this might not be for everyone who is just looking for a more basic monitoring and feedback system, for those that already use Jawbone, this will prove to be a useful addition. 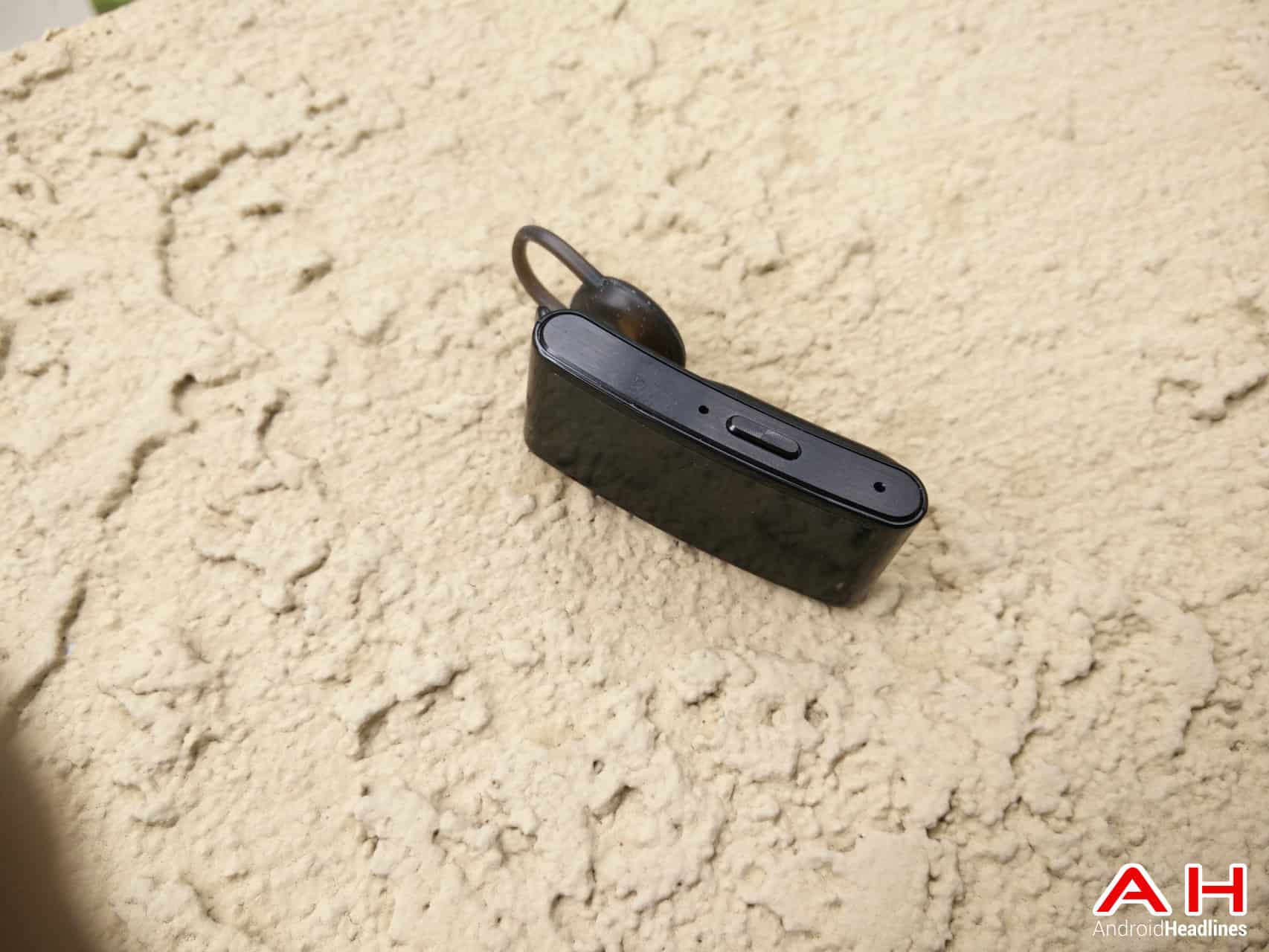 As Bluetooth calling is the other main feature of the TalkBand B2, it is worth briefly discussing. Like the predecessor, this feature is active and works to a good enough degree. As already noted, the snapping in and out of the main unit is significantly improved compared to the B1, although, that does not make it any easier to use as a Bluetooth Headset. There is a time-sensitive aspect to this function which needs to be noted. When a call is incoming, the device immediately vibrates and does show the phone number of the person calling. However, then starts the race to remove the unit quickly enough, attach to the ear and take the call. Not to mention, that as soon as the unit disconnects from the band, the call is already answered. Which does further add to the time pressure of attaching the device to your ear.

Besides this, the call quality was excellent and there were no major issues with either the caller being heard, or the person calling hearing you. If you do miss a call (which is almost impossible) than the display does also note that a call has been missed and gives you the option to call back by simply tapping on the screen.

For those wondering, the fitness tracking features do not work when the head unit is removed from the band and as such, this is a one or the other active feature. 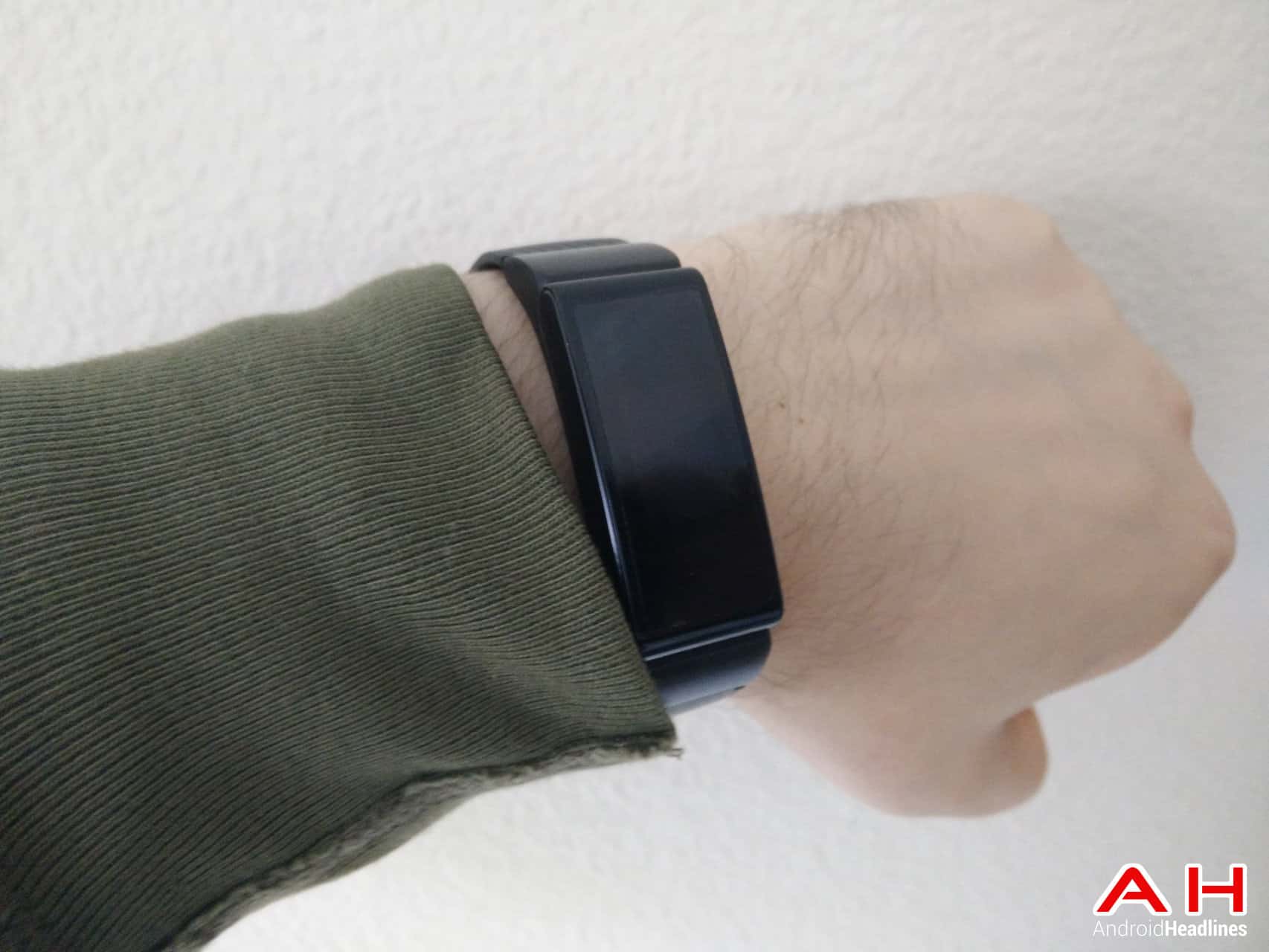 Battery life is a little hit and miss. For most people, this will be sufficient enough to get through the day. However, it only just gets through the day on a single charge. On average, the unit typically offered about 11 hours of usage before it fully depleted and switched off. This does mean the TalkBand B2 does need to be charged every day and regardless of how active you are. On the positive side of things, the TalkBand B2 charges fully in just over an hour (seventy-five minutes typically). 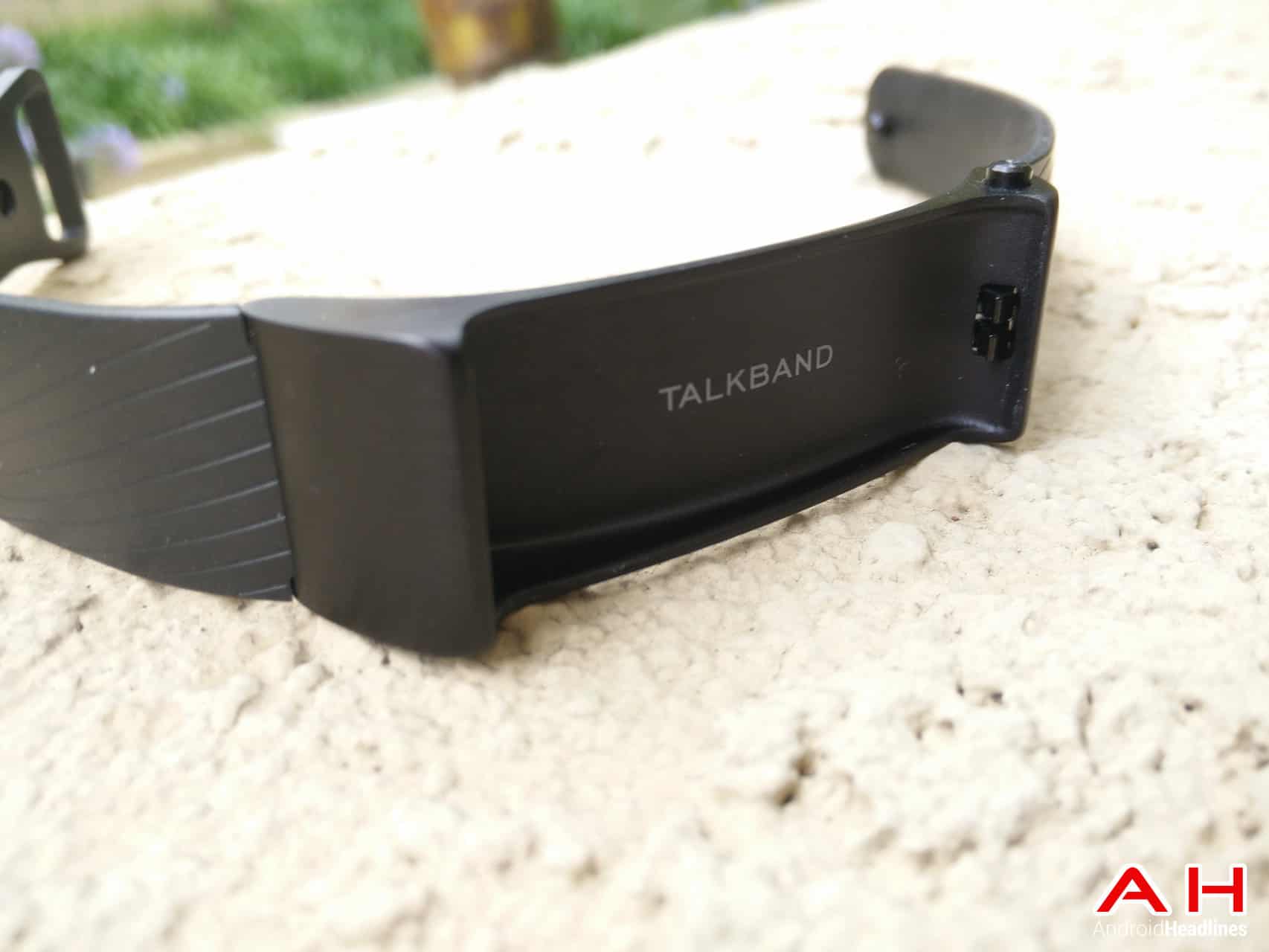 Overall, the experience with the TalkBand B2 was a positive one. The B2 is certainly an improvement over the B1 and the design and the functionality are both significantly better. Although the black unit does not look as good as the leather and gold option, it still did feel much more normal, watch-like and discreet when wearing and especially when remembering back to the B1. Therefore, as a general-use device, the TalkBand B2 did effectively replace a normal watch during testing. The software is much smoother and the app feels far more intuitive than before. On the downside, battery life is a little debatable and in spite of seeing massive improvements, is still limited compared to some of the other options. The UI on the TalkBand B2 is limited to simple swipe controls and the limited number of screens adds to how involved you can become with the device. Not to mention that it was extremely disappointing to note that although you can make and receive calls, there is no way to receive any notifications. That said, if you are in the market for a new fitness tracker and like the idea of one that comes with a detachable Bluetooth earpiece, then this will be a good option to try. As long as the $180 price does not put you off.