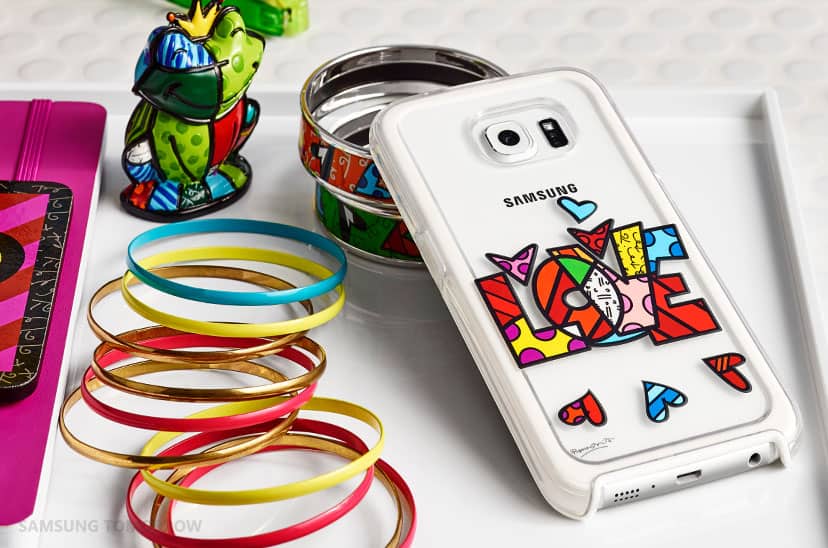 Samsung's sixth generation flagship models, Galaxy S6 and S6 Edge have apparently been selling in-line with expectations for the South Korean company. But that doesn't mean Samsung is sitting on its laurels and doing nothing about pushing sales further. The company has already released Avengers-themed Iron-Man edition of the devices as well as Avenger themed accessories featuring The Hulk, Thor, Captain America and Iron Man.

Now, Samsung has tied up with well-known contemporary artists, designers and high-street fashion brands to release a number of cases for the Galaxy S6 and S6 Edge handsets. The collaborations with the likes of Miami-based pop artist Romero Britto, luxury fashion accessories designer Rebecca Minkoff, British high-street retailer Burton, luxury crystal and cut lead-glass figurines maker Swarovski and maker of high-end writing instruments and timepieces Montblanc to release accessories is not the first time Samsung has venturing into the high-end designer accessories business either. Samsung has worked closely with Swarovski in the past to release various accessories for its smartphones and smartwatches. Last year, the two companies worked together on a number of products as part of the "Swarovski for Samsung" campaign, including Galaxy S5 cases and Gear Fit accessories. Swarovski had also produced some limited edition Crystal covers for the Galaxy Note 3 and a crystal encrusted strap for the Gear S.

In a statement released on the occasion, Samsung says they've "handpicked designers that share in our vision of design that is forward-thinking, streamlined and a fusion of fashion and technology". According to reports, this is Romero Britto's first ever collaboration of this nature with a consumer electronics brand and the artist has designed clear covers with his signature design language in vibrant colors. Rebecca Minkoff's cases and leather pouches are described by Samsung as being "subtly edgy" and come in various flower-printed versions. Burton's protective cases represent two of the brand's most popular vibrant print designs, whereas Montblanc's collection features exclusive leather cases and flip covers designed and manufactured in Italy. Swarovski meanwhile, has designed crystal-encrusted premium cases for the Galaxy S6 twins.

The company has also released a mobile app, designed exclusively for Galaxy S6 and S6 Edge users. The app would give more information about the latest range of high-end accessories for the devices, and can be downloaded through the Samsung app store or through Google Play. The images of some of the accessories can be seen below.