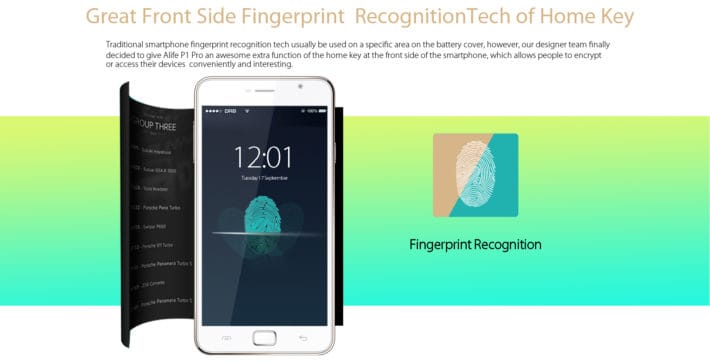 Chinese smartphone manufacturer Blackview may not a household name outside its home territory, but the company has managed to launch a few interesting devices in recent months, which have helped raise awareness about the brand within the larger tech community to a certain extent. Earlier this year, the company unveiled the Blackview Alife S1 smartphone and also launched a couple of helmet mounted cameras, named Hero 1 and Hero 2. More recently in the month of May, the company had released an entry-level handset named the Zeta, for just over $80. The device features a 5-inch 720p HD display and is powered by a MediaTek MTK6592 SoC. The phone comes with 1 GB of RAM and 8 GB of built-in storage.

The company is now readying the launch of a brand new smartphone named the Alife P1 Pro, and the biggest USP of this device is its built-in fingerprint scanner. The device features a 2.5D arc glass display, which measures 5.5 inches diagonally, and comes with a resolution of 1280 x 720, which gives the device a pixel density of 267 ppi. The smartphone is powered by Mediatek's MT6735 chipset, which is a 64-bit SoC with a quad-core CPU and a Mali T720 GPU. The phone comes with 2 GB of RAM and 16 GB of built-in storage, with support for microSD card up to 32 GB. There's a 13 megapixel rear camera and a 5 megapixel front camera on the device. The phone sports a 3000 mAh battery, and will run Android Lollipop out of the box. Connectivity options on the phone will include 4G LTE, Bluetooth 4.0 and dual band Wi-Fi. The phone will also sport a number of sensors, including gravity, proximity and ambient light. The phone will also support a number of international languages, including English, German, Spanish, Italian, French, Portuguese, Russian, Indonesian, Thai, Arabic, Turkish, Vietnamese, Malay, Greek, Chinese (simplified) and Chinese (traditional).

With a number of smartphone manufacturers adding various sorts of biometric sensors to their devices, Blackview has also included a fingerprint scanner on the front-facing physical home button, making the Alife P1 Pro the first device from the Blackview stable to sport a biometric sensor of any description. While pricing details are not yet available, the company's official website says the phone will be launched later this month.