Earlier this year Google and ASUS announced a range of new ChromeOS devices coming to market later on in 2015, and one of those alongside the ASUS Chromebit (a rather unique little Chrome OS dongle) was the ASUS C100 Chromebook flip, which as the name suggests, is a Chromebook which can flip the screen backwards similar to the what you’d see from something like the Lenovo Yoga laptops. There wasn’t an exact release date given for the ASUS C100, and unfortunately, that particular detail still hasn’t changed but a couple of online retailers have already started listing the product page for the Chromebook once it’s to be sold and are reportedly taking pre-orders, which may point to a nearby launch date.

As stated by both Brent Sullivan and Liliputing, the ASUS C100 Chromebook Flip has had product pages put up on two online retailers, both CDW and Provantage now have pages ready for the laptop when it hits, although ASUS hasn’t confirmed yet when this will be. As with most Chromebooks it comes with 16GB of internal storage space via the SSD, and it has 2GB of RAM and this particular ASUS model is powered by a Rockchip RK3288 ARM Cortex-A17 processor. The price was listed back during Mobile World Congress as being set for $249 and having a Spring time launch, but with the Summer now upon us it’s obvious the launch of this device was delayed just a little bit.

As the ASUS C100 flips backwards, the idea is to be able to give users the ability to use the Chromebook as a laptop or a touchscreen tablet, depending on the mode which suits the user’s needs best at the time. This one feature is what may make the ASUS C100 unique enough to stand out from other Chromebook models including those from ASUS’ own lineup, and it may make it just versatile enough to catch the eye of those torn by the decision of whether they should purchase a tablet or laptop. In addition to the $249 model, ASUS should also have a model launch with 4GB of RAM and 32GB of internal SSD storage for just a little bit more at $279. If you’re interested in one of these Chromebooks, keep an eye out for an official launch sometime in the near future. 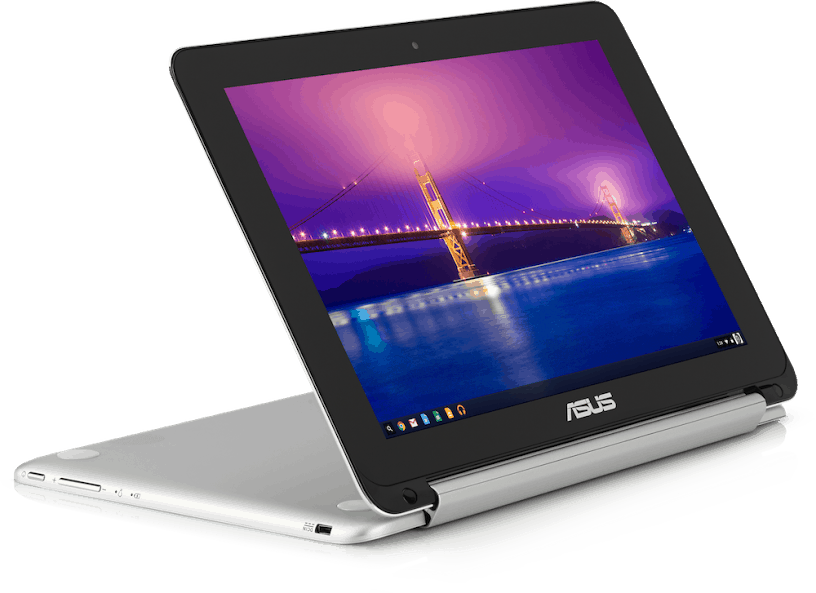