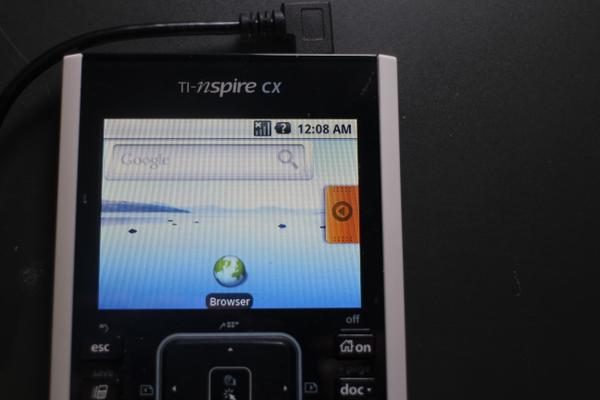 Google is one of the most versatile operating systems in the whole planet with implementations in numerous types of electronic devices, ranging from cars, smartwatches and even home appliances. Being an extremely open and flexible platform, developers have endless possibilities when it comes to personalizing the mobile OS entirely. This great versatility has today become much clearer as Google’s own mobile operating was ported into a gadget that the whole Android community never thought possible. Android has been previously installed into some rather unusual devices, such as the HP TouchPad tablet and the HTC HD2, both of which were shipped with a different operating system (webOS and Windows Phone respectively). The latest device that had Android ported is a graphic calculator, which as previously mentioned, was never believed to be capable of running the Google-owned mobile operating system.

The graphic calculator into which Android was ported is the TI Nspire CX model. This device is not meant to run Android at all; featuring a quite small 3.2-inch display with a 320 x 240 resolution, a mere 64MB of RAM, and a minuscule amount of storage space at 100MB. The TI Nspire CX model is powered by a small 150 MHz ARM-based processor, which has been just proven to be a minimum requirement for Android to barely run. These type of calculators sell for about $130 dollars, and are not designed by any means to run Android; the TI Nspire CX is meant to, well calculate and graph math equations. Tech enthusiasts however, have been finding more creative uses for the graphic calculator, such as running Gameboy Advance games among other platforms.

The main reasoning behind Android being installed on the TI Nspire CX was just to see if the mobile operating system could be supported by the device. and as Twitter user @Joshumax discovered, it is capable. The latest version of Google’s own mobile operating system that could be installed into the graphic calculator was Android 1.6 Cupcake, as the storage size was a big limitation. The Android OS inside the TI Nspire CX is lacking most of what was once included with the 1.6 Cupcake release, although the developer managed to get the keyboard working. Android inside a graphing calculator was not the most optimized, but it shows the wide range that could be achieved by Google’s mobile operating system.