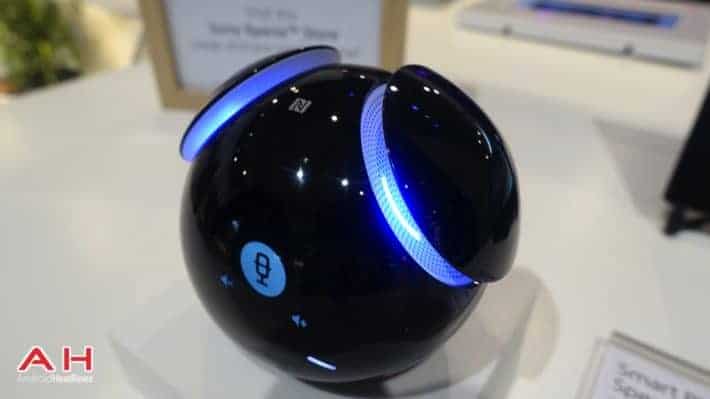 For those interested in Bluetooth speakers, there are a number of options now available on the market. In fact, you can pretty much pick up a Bluetooth speaker ranging from $20 up to $300. As such, the variance on offer is wide and spans quality, function and build. That said, recent developments in the Internet of Things (IoT) and 'smart' in general has resulted in some of the newer Bluetooth speakers on offer, being smart Bluetooth speakers. These do not only connect by offering a viable music output, but also now offer a way to further interact with your notifications and communications in general.

A prime example is the latest offering from Sony in the form of the Smart Bluetooth Speaker BSP60. This was one of the offering's Sony was in attendance with and showcasing at this year's MWC event in Barcelona. The BSP60 is a Bluetooth speaker but very much also a 'smart' one. As such, contains a number of additional voice activated features that might not be present on your more standard Bluetooth offerings. Some of those features include the ability to ask the BSP60 a question, like the current weather or your schedule for the day. In response, the BSP60 will provide the information audibly (vocal responses currently available in eight languages). Not to mention, the BSP60 will also offer the ability to utilize hands-free calling, as well as alarm features. Of course, it will also play back your music as well. In fact, the BSP60 will even dance along with you to your favorite songs. You can see an example of this in the video below.

If you have been waiting on this product to launch then it looks like that time is approaching. Sony today announced that in certain markets (mainly Europe) the BSP60 is now available to pre-order. In fact, pre-orders will be open from today until June 21st. After which, the expected full launch and availability is expected to follow and shipping to begin in the final week of June. In terms of price, the BSP60 is available on pre-order for â‚¬299 (roughly $335). Those interested in placing a pre-order or just generally finding out more about the BSP60 Smart Bluetooth Speaker, can click the source link below to head over to today's Sony announcement.