Skip to content
Trusted By Millions
Independent, Expert Android News You Can Trust, Since 2010
Publishing More Android Than Anyone Else
20
Today
148
This Week
413
This Month
2357
This Year
112436
All Time Sharp have revealed the second Android tablet powered by the Qualcomm Snapdragon 810. The new tablet, Sharp Aquos Pad SH-05G, shares many of the same specifications with their released Android smartphone, the ZETA SH-03G. The Aquos Pad SH-05G is only the second tablet that we are aware of us to be based around the Snapdragon 810 and given that the tablet chassis is more spacious than a smartphone, this should help the device to better utilize the current high end flagship processor. However, as we will come on to detail, the new Sharp tablet is not a very big device for a 7.0-inch screen.

To detail the SH-05G’s specifications, as well as the 2.0 GHz Snapdragon 810, the tablet is built around a 7.0-inch, 1,200 by 1,920 pixel (slightly higher than 1080p, but Full HD) IGZO screen. The tablet follows in Sharp’s recent trend of minimizing the bezel, so the device is small in the context of a 7-inch tablet. It’s just 174mm by 105mm by 8mm, which compares with the 2013 Nexus 7‘s dimensions of 200mm by 114mm by 8.8mm. The Sharp tablet is smaller and noticeably lighter than many similar devices: it weighs just 210 grams, compared with 290 grams for the WiFi-only Nexus 7 (and 299 grams for the LTE model). Under the skin you’ll also find 2 GB of RAM, 32 GB of internal storage plus a MicroSD slot, and a 3,900 mAh battery. These are comparable to the Nexus 7, although that was also available in 16 GB capacity. There’s an 8MP rear camera and a 2.1MP front facing camera and the Sharp will launch with Android 5.0 Lollipop as standard.

The new Sharp tablet, then, is small and powerful plus it runs a reasonably modern version of Android. It’s available with LTE on Japanese carrier DoCoMo’s “Premium 4G” service and supports a download transfer speed of up to 225 Mbps, plus it can combine WiFi with LTE for higher performance downloading. It also supports VoLTE (voice over LTE) and may be used as a ‘phone. It would make for an interesting device to use, especially if the chassis allows for better SoC cooling to keep the Snapdragon 810 running at higher clock speeds. Unfortunately, we’ve no word if the new Sharp Aquos Pad SH-05G is going to make it out of Japan but if we hear anything, we will let you know. 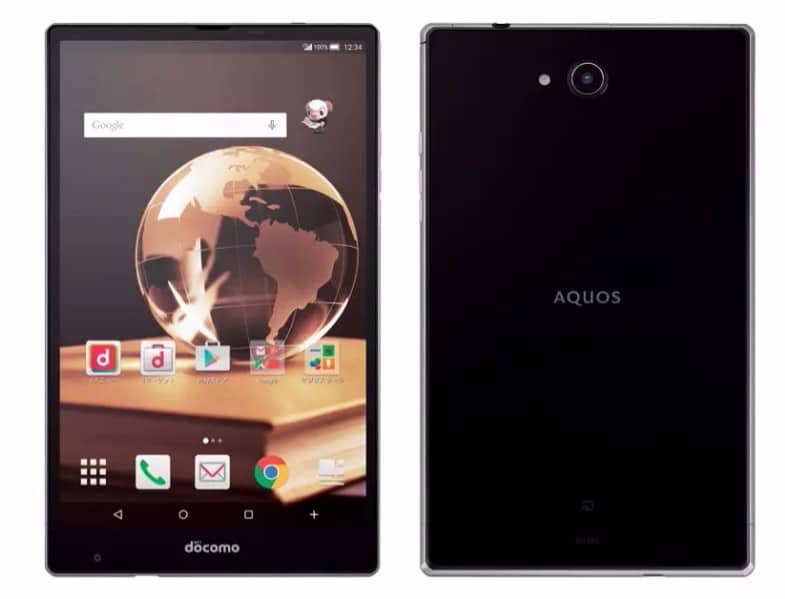