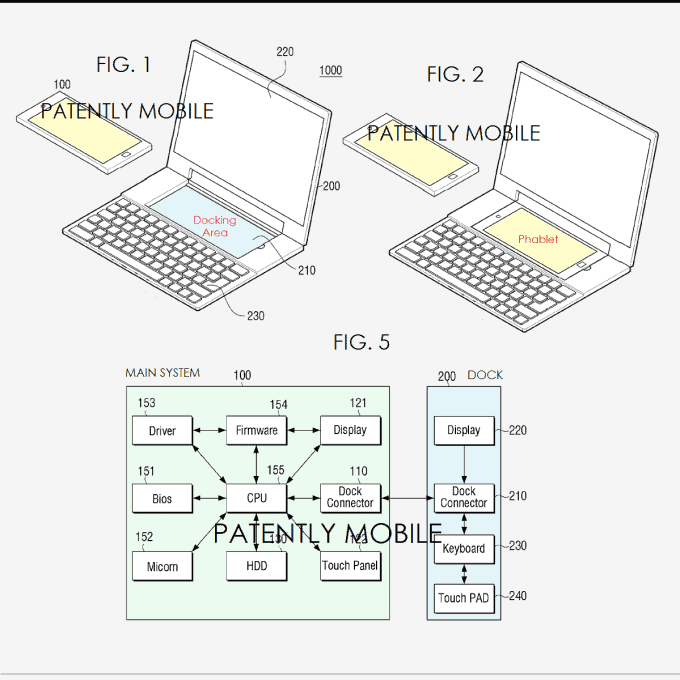 As mobile devices are becoming more powerful and their screens get bigger, some of the functions that were exclusive to the PC can now be done in those lighter and more portable devices. The idea of having a powerful PC in the body of a mobile device seems closer now with devices like the Surface Pro 3 from Microsoft, and even as the company has been having trouble with the latest versions of their Windows operating system for the PC, the idea seems to be here to stay. Apple is also rumored to be working on an iPad with capabilities close to the ones of a PC and a reported patent from Samsung dating back at Q3 of 2014 suggests that the South Korean company might be working on a solution of their own. All of the devices mentioned before are targeted to business users and Samsung has also been working with some software from Microsoft by preinstalling it on some of their newer smartphones or tablets and the security benefits of Blackberry and their own platform Knox, so a device of that kind with the same target audience is not entirely out of the question.

First of all, let's remember that while patents may reflect future plans of companies some of them might not end up being used. This particular one includes some pictures that show a dock station for a phablet that includes a screen and a keyboard to be used like a traditional laptop. The difference is that the dock would not include any components to make it work, so it would rely on the processing power of the phablet while keeping it thin and light. It's not the first attempt to make a similar device, Motorola tried it with the Atrix and its so-called Lapdock, but being one of the first phones to use a dual-core configuration and good specs for that time wasn't enough to convince many people about its benefits. Perhaps it had to do with the software that wasn't optimized to take advantage of the hardware, so Samsung may be planning to use one operating system when the phone is being used regularly, probably Android, and some software dedicated to PC's when the phone is docked, Windows 10 is a possibility, but maybe they would design something on top of their own platform Tizen.

Even more interesting is that the screen of the phablet would not only be a second screen, but it might be used as a touchpad to control some elements of the bigger screen, although its position would be a little unorthodox, only the Acer Aspire R7 comes to mind with that kind of hardware configuration. It isn't clear what other components will integrate the docking station, most likely it would include a battery to make better use of the one included in the phone.