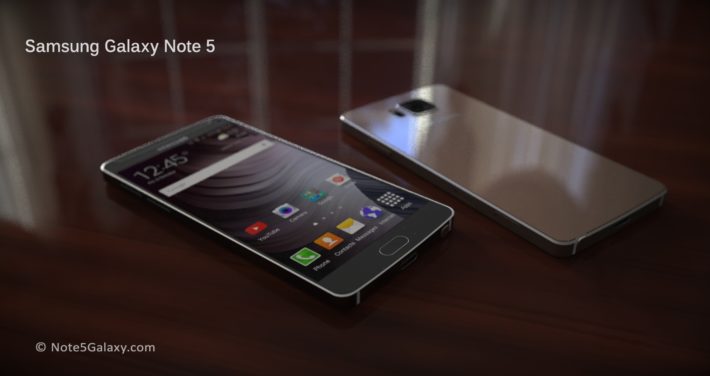 While the Galaxy Note 4 from Samsung was well received by both the press and the public, the device that got even more attention was the Galaxy Note Edge, with its revolutionary curved display. The phones, along with the Galaxy S6 twins released earlier this year has allowed Samsung to arrest the slide and recover some of its lost ground against Apple in worldwide sales. The Samsung Galaxy Note 5 is due out later in the year to take over from the Note 4 as the company's flagship large-screen device, and speculations abound as to how Samsung might achieve something better than the device they launched last year.

While nothing official has been forthcoming from Samsung about their next generation flagship phablet, we have seen quite a few concept renders floating around on the internet. The latest ones seem to predict a 4K UHD (Ultra High Definition) Super AMOLED display measuring 5.9 inches, an ultra-slim 7.9 mm metallic body, and a fingerprint scanner. While Samsung may or may not choose to increase the screen size to 5.9 inches, the 4K screen is a very strong possibility. That is because according to some reports, Samsung Electronics' display division will begin shipping 4K (3840 X 2160) panels by the end of this year. The renders also predict that the phone will come with a 4100 mAh battery, an USB type-C port and will come in 64 GB and 128 GB storage options with a microSD card slot.

While these renders are all good fun, it does beg the question as to what do we really know for fact about the upcoming phablet from Samsung – if anything at all. We know that most probably, the Galaxy Note 5 is internally codenamed "Project Noble" within Samsung. Also, as mentioned earlier, given Samsung Electronics' ETA of 4K AMOLED panels, the 4K screen on the Note 5 is a distinct possibility, overkill or not. As for the SoC that Samsung is going to use in their upcoming new flagship phablet, the much rumored Exynos M1 is a possibility, but not a certainty by any means. 4 GB RAM and 64 GB storage (with a 128 GB variant) are also pretty realistic, going by the way the industry is shaping up. Some of the latest conceptual renders of the device can be seen below.