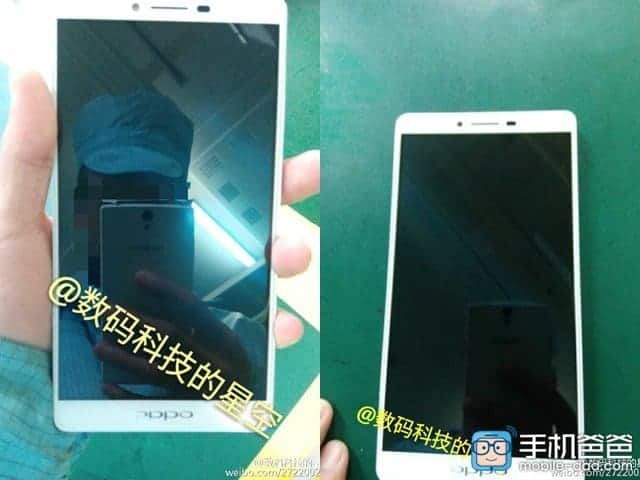 Oppo R7 is one of the most talked about devices as of late. Huawei's upcoming 'bezel-less' mid-ranger has been leaking all over the place for the last couple of weeks, but that's not the only handset that was mentioned. The Oppo R7 Plus has also been mentioned in several leaks thus far, and according to rumors, this handset will be a higher-end version of the Oppo R7. Anyhow, a new rumor surface in China showing off a familiar design and speaking about the release date of this handset.

If you take a look at the provided image, you'll notice that this is the exactly same handset that leaked a while ago. Unlike the Oppo R7, this handset actually sports visible bezel on the sides. As you all probably know thus far, the Oppo R7 sports bezel on the sides, but they're not visible thanks to Oppo's light reflection trick which makes it look like there's no bezel on the device's sides until you actually tilt it. According to the provided image, the Oppo R7 Plus will also sport an Oppo logo below the display instead of the capacitive buttons, and judging by previous rumors, that logo won't double as an LED notification light as some reports have been stating.

The Oppo R7 Plus will reportedly sport on-screen buttons, unlike its sibling. The device is rumored to sport MediaTek's MT6795 64-bit octa-core processor, just like the Oppo R7. We still can't confirm any of these rumors, so take it all with a pinch of salt. That being said, the R7 Plus is also expected to sport a premium metal design, and will qutie probably ship with Android 4.4 KitKat, unless something changes in the meantime. Oppo's Color OS will be installed on top of Google's operating system, and the device might launch on May 20 when the company intends to launch the Oppo R7, at least according to this rumor.

There you have it folks. We've seen three different leaked variants of the Oppo R7 / R7 Plus, one device sports 3 capacitive buttons below the display, the other one only Oppo's logo and the third variant actually features a physical home button flanked by two capacitive ones. It remains to be seen which one of these designs will belong to which handset, but it seems rather certain that the Oppo R7 will sport 3 capacitive buttons below the display. We'll report back as soon as we stumble upon some additional info.