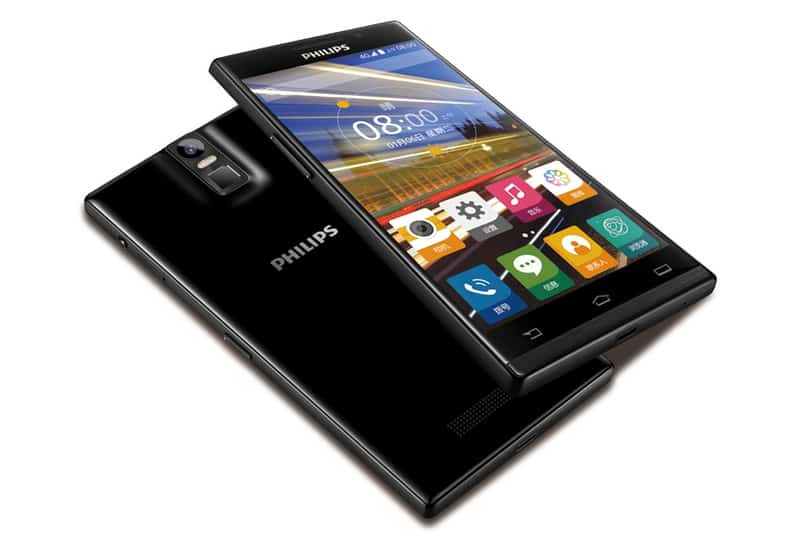 Philips is a well-known brand, this Dutch company has been around for a long time and has been providing all sorts of devices to consumers. Philips, however, is not the first company you'll think of when smartphones come to mind. There's a good reason for that, Philips doesn't really announce smartphones that often and they're not that well-known for making them, they never were, but the company does announce a smartphone from time to time. Earlier this month, a high-end Philips-branded smartphone was certified by TENAA (China's equivalent to the FCC) and revealed its specifications. This was somewhat unexpected, but it seemed like Philips is getting ready to launch a device in Asia.

Well, some additional images have leaked showing off Philips' high-end offering. All we've seen thus far as far as Philips i999 is concerned, are some images from TENAA which weren't all that great. Well, two new nice images surfaced giving us a really good look at Philips' upcoming flagship. As you can see, the device will sport 3 capacitive buttons below the display: back, home and recent apps / overview. The Philips i999 will also feature a rear-facing fingerprint scanner which will be located below the camera sensor and the LED flash. The design of this handset seems rather industrial and we still don't have any info regarding build materials Philips used here.

The Philips i999 will sport a 5.5-inch QuadHD (2560 x 1440) display, 3GB of RAM and 32GB of non-expandable internal storage. This handset will be powered by a quad-core processor clocked at 2.5GHz, though TENAA did not reveal who is the manufacturer of that SoC. The 20-megapixel camera will be located on the back of this device, and below it you'll be able to find a dual-LED, dual tone flash. The 8-megapixel snapper will be available on the front side of this handset, and Android 4.4.3 KitKat will come pre-installed here with some additions from Philips. The device will measure 153 x 76 x 8.2mm, weight 160 grams and 4G LTE connectivity will also be a part of this package. There you have it, we'll let you know when we get more info, check out the images down below in the meantime.