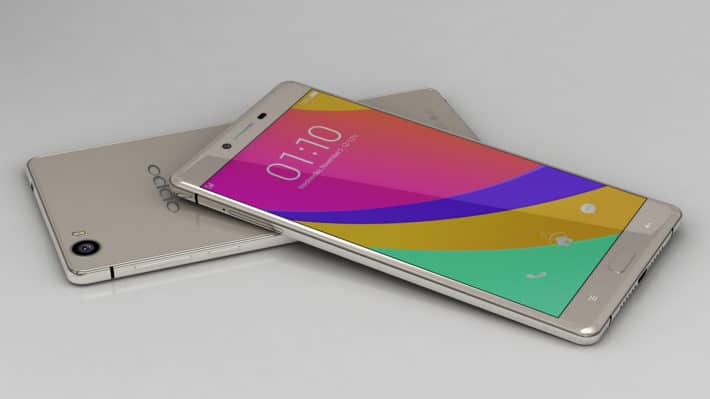 Oppo is a Chinese Electronic manufacturer company that entered the mobile market in 2008. They started producing smartphones in late 2012. From then onwards, Oppo has delivered very competitive handsets in the Android Market. According to the leaks, Oppo is going to release the successor of Oppo R5 named R7 that will be a tad thinner than its predecessor. The recent leaks suggested that Oppo's R7 will be powered by the Mediatek MT6795, but according to this leak there will be an another version with the Snapdragon 615 chipset. The Snapdragon 615 rocks four threads whereas the MT6785 is an Octa core chipset which would provide better multitasking and smooth performance. The MediaTek's chipset has higher clock speed as well as higher RAM speeds.

But according to the leaks, even with the Snapdragon 615 chipset, Oppo's premium bezel-less and slimmest smartphone would be around $500. That is a hefty price-tag for a phone with the 600 series of Qualcomm's Snapdragon. The leaked images from an internal Oppo presentation show that the Chinese OEM would be targeting the Huawei's P8 – that is also a very sleek and slim smartphone with great innards delivering heavy performance with a high-range chipset.

The leaks also suggested that Oppo R7 with the mid-ranged Snapdragon 615 will have a 5-inch 1080p display – FullHD with a 13-MP primary camera and possibly a 5 MP front-facing camera. It will be packing a solid 2GB RAM, that will be more than enough for everyday tasks and light gaming. It will be having an internal 16 GB storage memory for your applications, games, and other data which is usually enough for some people. Oppo R7 will feature Oppo's Color OS 3.0 above the Android Lollipop 5.0 which is also a neat piece of software.

Oppo's R7 is scheduled to be released on 20th May, as invites are being sent to Digital Media personnel for the release of Oppo's bezel-less premium phone. With the price tag of $500 and a mid-ranged chipset Snapdragon 615, it will be a deal breaker for some.