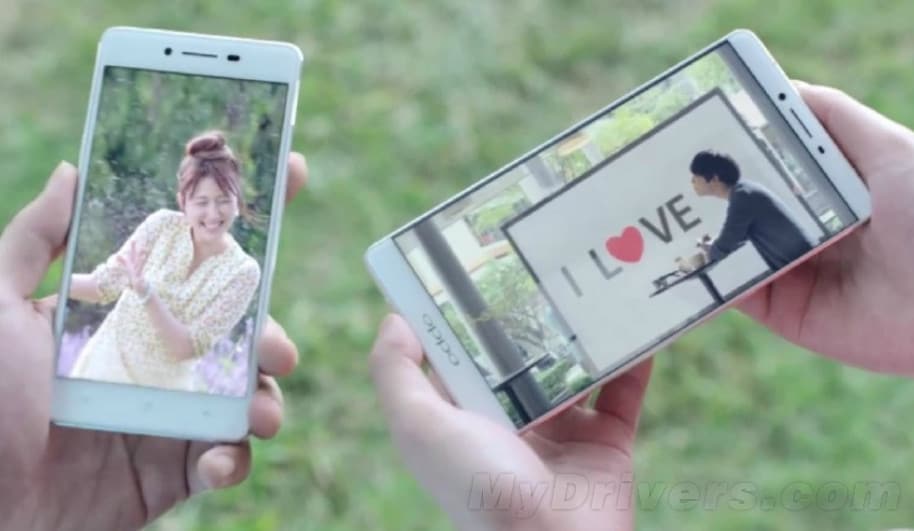 Oppo R7 is a somewhat interesting device and has been leaking like crazy over the last couple of weeks. Every week we see a number of rumors and leaks regarding this phone, and the company has also confirmed that they'll hold an event on May 20, and Oppo R7 will almost certainly be announced then. The Oppo R7 is not the only Oppo-branded handset that was mentioned quite frequently lately, the R7 Plus has been popping up all over the internet lately as well. We've seen a new leak yesterday which gave us a good look at both of these devices, and now we have some additional images to share with you.

You've already seen the first and second image in a previous leak, though the ones in the gallery down below offer better quality, and thus give you a better look at the devices. The rest of the images in the gallery have been taking from a leaked video you can check out by clicking here. These new images only confirm the design of both of these handsets. The Oppo R7 will feature 3 capacitive buttons below the device and a rather regular form factor, while the company has confirmed that this device will sport a magnesium alloy material on its back. The Oppo R7 Plus, on the other hand, will sport similar build, but it will feature a rear-facing fingerprint scanner and now capacitive buttons below the display, at least they're not visible in any of the images. As you can see, the Oppo R7 Plus sports only the 'Oppo' logo below the display, we still don't know if it will have a purpose or if its there just for the sake of it.

The Oppo R7 has also been certified by TENAA already, and according to that listing the phone will feature a 5-inch 1080p display along with 3GB of RAM and 16GB of internal storage which you'll be able to expand up to 128GB via microSD card. This handset will ship in two versions, one will be powered by the Snapdragon 615 64-bit octa-core SoC, and the other one by MediaTek's MT6752 64-bit octa-core chip. The 13-megapixel camera will be located on the back of this handset and flanked by an LED flash, while an 8-megapixel snapper will be available up front. Android 4.4.4 KitKat will also be a part of the package, and Oppo's Color OS will be installed on top of it. This handset will, of course, also offer 4G LTE connectivity. We still don't know the specifications of Oppo R7 Plus, but it is quite possible that the 'Plus' version will also get launched on May 20. Stay tuned, we'll report back soon.