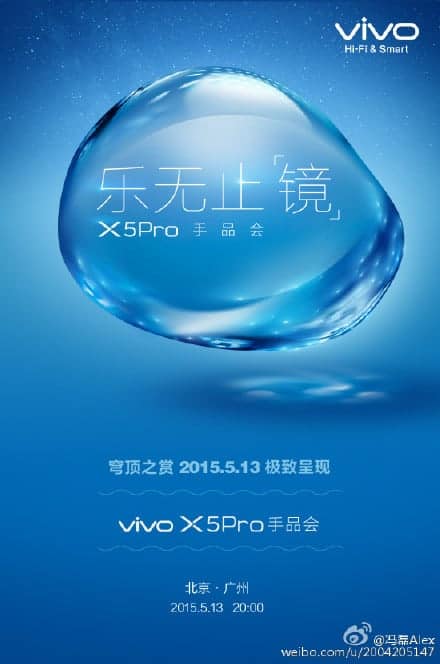 Two of Vivo's handset have leaked recently, the Vivo X5Pro and Xshot3. The Xshot3 leaked in a couple of images, but the X5Pro has been leaking for quite some time now, and the device was even certified by TENAA (China's equivalent to the FCC) recently. Vivo has been teasing the X5Pro for quite some time now, and the company has revealed that the device will be able to produce 32-megapixel images despite the fact it will not sport a 32-megapixel camera. It seems like the phone will offer an Oppo Find 7-like software feature, it will basically take a bunch of images and make a huge 32-megapixel image out of them. That's not all though, Vivo has also teased the retina scanning functionality of this device quite recently.

We've assumed that the X5Pro will launch soon considering its certification, but we didn't know when. Well, Vivo has removed any doubt, the company has released yet another image on their official Weibo (Chinese social network) account and revealed the exact date of X5Pro's launch. Vivo's upcoming handset will land on May 13 at 8pm (5am PST) in China. That being said, let's take a look at this device's specs. According to the latest leak, the Vivo X5Pro will sport a 5.5-inch 1080p (1920 x 1080) Super AMOLED display along with 2GB of RAM and 32GB of in-built storage. On the back of this device you'll be able to find a 13-megapixel camera, and a 5-megapixel snapper will be located up front. This device will be powered by an unnamed 64-bit processor clocked at 1.7GHz, we're probably looking at Qualcomm's Snapdragon 615 octa-core SoC here. Android 5.0 Lollipop will come pre-installed here with Vivo's Funtouch OS 2.1 on top of it. The 4,150mAh battery was also mentioned lately, a rather big unit will make sure you don't run out of juice ahead of time.

There you have it folks, the Vivo X5Pro will land in less than a week, so stay tuned for that. We still don't have any info regarding Xshot3's release date or specifications, and we doubt it will launch on the same date as the X5Pro, but it's possible.