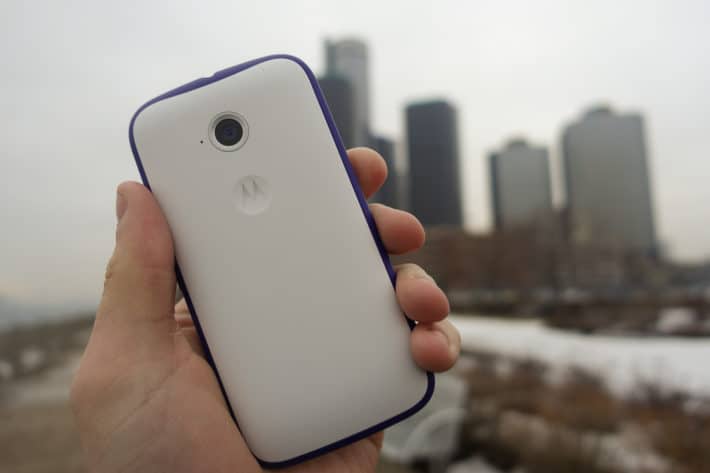 Motorola's refresh to their entry level Moto E earlier in the year introduced a number of new features to the budget device, chiefly a larger screen, a higher performance processor and a 4G LTE radio, bringing a faster and more responsive Internet connection for customers. The second generation Moto E also comes with a near-stock user interface, which means it's relatively simple and therefore quick for Motorola to push software updates to the device. Motorola have also released many applications into the Google Play Store, which simplifies the process of updating and adding in new features to the device.

To write about the Moto E, the new processor is a 1.2 GHz, quad core, 64-bit Qualcomm Snapdragon 410 processor, which consists of four ARM Cortex-A53 cores. This is backed up by 1 GB of RAM and 8 GB of local storage. There's a 4.5-inch, qHD display (that is, 540 by 960 pixels), both of which are upgrades to the original Moto E which was powered by a dual core, 1.2 GHz, 32-bit Snapdragon processor and a 4.3-inch, 540 by 960 pixel screen. There's a 2,390 mAh rechargeable battery, a 5.0MP rear camera and a 0.3MP, or VGA, front facing camera (whereas the original Moto E did without a front facing camera). The second generation Moto E was also released running Android 5.0 Lollipop and included a number of the Moto X's special features, including Moto Display and the Quick Capture Camera feature. In short, Motorola reworked the idea behind the Moto E and aimed to deliver something of a premium experience on what is their least expensive device.

It appears that this software update to Android 5.1 Lollipop is not a soak test, but instead the final, production version. The update notification has appeared for owners of the XT1527 device although we fully expect the update to be rolled out in stages as not all devices have received the update yet. Device update stages usually take anything from a few days to a week or so, assuming there are no problems. If your second generation Moto E is still waiting for the update I would recommend giving it a few more days yet.