Skip to content
Trusted By Millions
Independent, Expert Android News You Can Trust, Since 2010
Publishing More Android Than Anyone Else
29
Today
140
This Week
907
This Month
4730
This Year
122301
All Time It appears, Meizu is having an event in June. They are looking to have an event in Beijing – as usual – to announce a few new smartphones. New rumors are coming out this afternoon that the Meizu MX5 and the Meizu M1 Note 2 might become official at an event in June. Which we’ll be there! Last year, Meizu announced the MX4 and MX4 Pro. Both of which we reviewed, and fell in love with, in fact I still use the MX4 from time to time. Meizu also announced the M1 Note last December in Beijing, which is a pretty cheap smartphone. It has a 5.5-inch 1920×1080 resolution display, MediaTek’s MT6752 processor – that is an octa-core chip – along with 2GB of RAM and 16GB of storage. Pretty much blows Motorola’s offerings out of the water. The M1 Note also came in a slew of colors, although it was made of plastic.

Now here come the M1 Note 2 rumors – which I really hope that’s not the name. The Picture below is the MX5, according to these rumors. We can’t really see much of the device, but it does look like Flyme OS hasn’t seen much of an upgrade, from what we can see. However the home button is a bit different. On the MX4 we had a circular capacitive key for home, and the MX4 Pro had a square (with rounded corners) physical home button which also had the fingerprint scanner inside. This time we have an oval home button. Which pretty much tells us that we will likely have a fingerprint scanner included again.

There’s also word that the MX5 could feature another MediaTek chip. The MT6795 isn’t necessarily a new chip, but it is a “true” octa-core chip from MediaTek that does clock up to 2.2GHz, so it’s definitely no slouch. The unveiling is set for June 30th in Beijing, which we will be there to see what Meizu has in store. So far we’ve been pretty impressed with their recent devices, and we expect the same for 2015 with the Meizu MX5 and Meizu M1 Note 2. 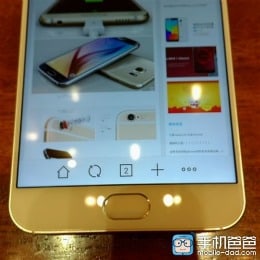