Chinese companies are perhaps amongst the most enterprising of businesses, especially when it comes to copying other manufacturers. We’ve seen several countries and manufacturers taking a Chinese business to court over a patent infringement – that is, the company using a technology without the appropriate licence from another business. And we’ve also seen Chinese companies copying other devices, typically Apple or Samsung handsets, too. What we are less used to seeing, however, is one Chinese company suing another because of patent infringement. And whilst this is all very interesting, what could it possibly have to do with the release of the Meizu m1 Note and MX4? It seems that the reason why Meizu is releasing follow up devices to the MX3 and Charm Blue Note is because of a patent court case with ZTE’s Nubia unit.

The clue to this court case is an anonymously posted image that claims to be a lawyer’s letter, in which Nubia claims that the Meizu MX4, Meizu MX3 and Charm Blue Note violate two of their patents: the Z5 appearance patent (reference number 20,123,048,192.3) and the “touch key module and mobile terminal patent,” reference 200820116764.7. The “touch key module and mobile terminal patent” patent likely means the small, circular home key of the device with a small symbol on it. This small halo home button is a reasonably recent feature of Meizu smartphones, and perhaps a short lived feature too.

It is possible that ZTE have forced Meizu to launch a new version of their existing designs, and in order to save a little face, Meizu decided to upgrade the devices. We understand that ZTE have one of the larger patent portfolios of the larger Chinese manufacturers and indeed it’s one of the reasons why the brand has been able to successfully sell into overseas markets, as the more mainstream device manufacturers have been traditionally keener to clamp down on patent infringements. This rumored activity might be the start of a sea change within the Chinese smartphone industry and it remains to be seen what other manufacturers will be or have been suing one another for patent infringement. We have seen no comment from Meizu regarding this issue. 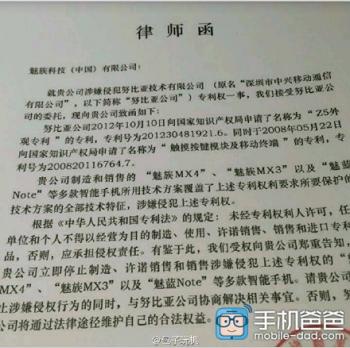