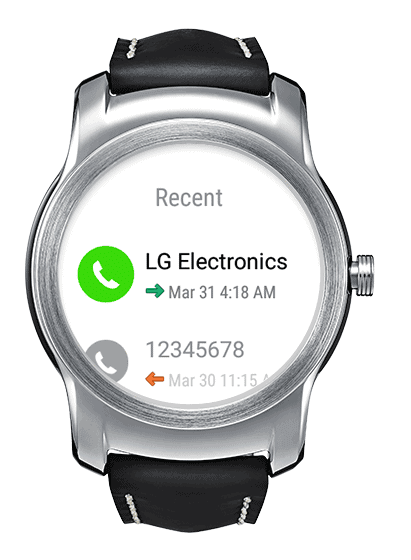 LG launched a new app in the Play Store this morning. It's only for the LG Watch Urbane however. Which is cool and all, but LG does not mention that at all in the Play Store description. "LG Call for android wear is a companion app which is work with LG android wear device. You can enjoy Recent call, Favorite contact and Dial pad from your LG Android Wear device. Make a call on your wrist without pulling out a phone." LG simply says "LG Android Wear device" so you can see where the negative reviews are coming from right now. Those with the LG G Watch or the G Watch R. Which the app isn't compatible with currently. Which is a bit surprising. Perhaps after the Watch Urbane is available we might see this app updated to support LG's other smartwatches.

The app is actually pretty cool. You can make calls from your watch, even though they go through your phone as expected. You can call numbers in your recents as well as favorites, or just dial an entirely new number altogether. So you can make a call without pulling out your phone. Which is pretty cool. However, all of the 1-star reviews – which at the time of writing this sits at 218 – could have been avoided if LG had written in the description that it's only for the LG Watch Urbane. Although people still would have been pissed, I'm sure.

The LG Watch Urbane has already started shipping to those in the US. It's available from Verizon, AT&T and Google's Store right now. It's currently on sale for $349. Making it the most expensive smartwatch currently available. With everything else being $249 or less, including the Moto 360, Sony Smartwatch 3 and even the LG G Watch R.