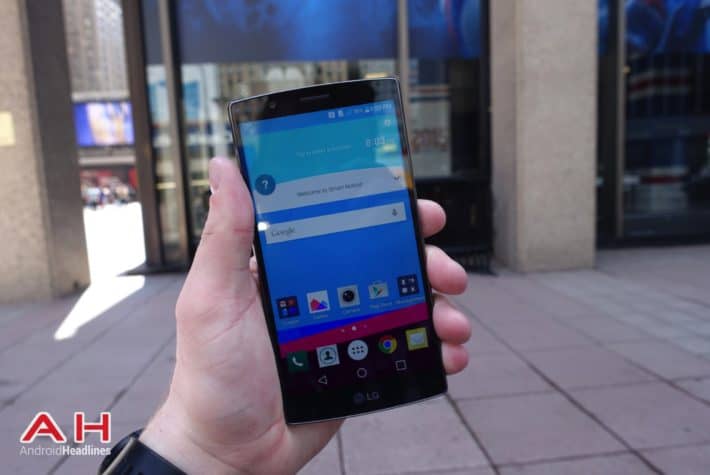 Near the end of April, LG announced that their new flagship, the LG G4 would be arriving in Canada, "beginning this June."  A WIND Mobile tweet today made that June date official as in June 19.  No pricing was officially announced, but earlier today, LG invited Canadians to enter a contest where 35 contestants would be selected to try out the LG G4 during the month of June and a chance to win prizes along the way, as well as the chance to receive your very own LG G4…the retail value was set at $699.99. Even though the tweet was from Wind Mobile, we know that the LG G4 will also be heading to Rogers, Bell, TELUS and Vid©otron, with the only options in color being the "Metallic Grey" plastic version and the "Black" genuine leather variants.  Because the backings are interchangeable, you should be able to order the backing of your choice at a third party retailer – extra money that is true, but worth it if you really want some personalization.

The new LG G4 is simply an evolutionary upgrade to last year's popular LG G3 – however, LG tweaked it enough that even some G3 owners…already with the QHD display…may find the upgrade worth the purchase.  The most important area is in the display, and while it is the same 5.5-inch size and QHD resolution, the newer technology produces a much better viewing experience.  The LG G3's display, while sharp with 538 pixels-per-inch (PPI), could best be described as 'dull' looking and this not so with the new LG G4.  LG is using a new IPS Quantum display technology that LG claims will give the display a boost in brightness of 25-percent, a 50-percent increase in the contrast and a 56-percent improvement in color accuracy.  All of that adds up to a vastly improved user experience.

The other upgrade is for the photo buffs among us – the 16MP main camera comes with a larger f/1.8 aperture, LG's great laser autofocus, dual-tone LED flash and OIS to give you some of the best pictures you can get with a smartphone.  LG included a huge 8MP front-facing camera (FFC) with a f/2.0 aperture for excellent selfies and video chatting. The last big upgrade is in the processor area – the LG G3 used a Qualcomm 32-bit Snapdragon 801 quad-core while the LG G4 has upped the specs to a 64-bit Snapdragon 808 hexa-core processor.  LG did use the 64-bit Snapdragon 810 octa-core in their new LG G Flex 2, but opted to go with the 808 hexa-core instead…possibly because of the controversy surrounding the 810…however, the 808 has been optimized for the G4 and seems to be performing quite well.