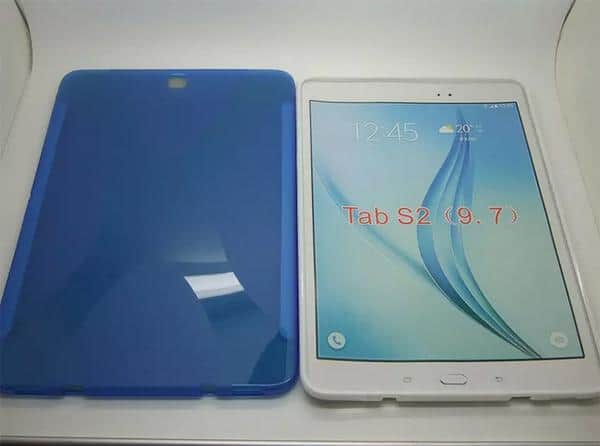 Samsung's Galaxy Tab S was a very popular and successful tablet that gained a lot of traction. Because of this, Samsung has decided to create a successor to the device called the Galaxy Tab S2. Despite this tablet not yet being official, the device has been prevalent in Android news lately. Leak after leak seems to be popping up, revealing the device in some way, shape or form. This morning, there is yet another leak, only this time it isn't of the device itself.

This new leak comes from OnLeaks and shows what appears to be a case for the Galaxy Tab S2. Said leak consists of three images, each one showing the case from a different angle. Something worth pointing out is that this case is designed for the 9.7-inch variant of the Galaxy Tab S2. If you didn't already know, the Galaxy Tab S2 is supposedly going to be released in two different sizes, 8-inches and 9.7-inches. This type of leak seems to have become quite popular over the past few years. They happen so frequently because of case manufacturers creating cases for devices before they are officially revealed to the public.

Let's take a moment to go over the proposed specs of the Galaxy Tab S2. Take note that none of the specs are official and are taken from GFXBench. So, first off there's the display, which is an AMOLED 2048 x 1536p display. The display could come in one of two sizes like mentioned above, 9.7-inches, or 8-inches. Both of these displays sizes would be a 4:3 aspect ratio, just like Google's Nexus 9. Next up, there is the processor that will be powering the device, Samsung's Exynos 5. This particular processor is an octa-core processor and is part of the big.LITTLE family. The Galaxy Tab S2 will also supposedly have 3GB or RAM, 32GB of internal storage, and a 7MP rear-facing camera that is capable of 1080p recording. Of course, the device will also have the usual Bluetooth and Wi-Fi. It's exciting to see that Samsung is supposedly working on a successor to the Galaxy Tab S. With all of these recent leaks of the device Samsung must be getting close to making an official announcement of the device's existence.