Skip to content
Trusted By Millions
Independent, Expert Android News You Can Trust, Since 2010
Publishing More Android Than Anyone Else
35
Today
70
This Week
519
This Month
5656
This Year
115660
All Time

Huawei has been really busy lately, the company has announced six new devices in about a months. This China-based smartphone OEM has launched their new flagship P8 line of devices in April, and that was followed by the announced of the mid-range Honor 4C smartphone, and two mid-range tablets. Huawei P8 and P8Max are the company’s newest flagships, while the P8 Lite can’t exactly be called a flagship, but it’s more than a decent mid-range offering by the company.

That being said, Huawei seems to have plans to launch a number of additional devices by the end of this year, as the company’s roadmap surfaced online. Xiaomi’s devices are also mentioned here, you can read more about that here. According to the provided info, Huawei will announce D8, Mate 8, Honor 7 and a couple of additional unnamed Honor devices by the end of this year. The first in line is Huawei Ascend D8 (though ‘Ascend’ probably won’t be a part of its branding, Huawei decided to ditch it) will launch this month according to the source, and it will sport a 5.5-inch WQHD display, premium metal build and Huawei’s HiSilicon Kirin SoC. The D8 was mentioned a while back, and according to that info and the specs provided here, this might be the ultra high-end device by the company, priced above the P8 and P8Max.

Huawei’s upcoming phablet, the Mate 8, will reportedly launch next month. This thing will sport a 6-inch WQHD display, a 16-megapixel rear-facing OIS camera and a Kirin processor on the inside. In July, the company plans to release two Honor devices, one of them will feature a 5.5-inch 1080p display and a Kirin SoC, and the other one a slightly smaller 5-inch 720p panel and Qualcomm’s Snapdragon chip. Both of them will sport metal casings. Next in line is Huawei Honor 7 which will feature a 5.5-inch 720p panel, going to be powered by the Kirin SoC and will feature two 13-megapixel cameras on the back. Some additional variations of this device might be launched that same month as well.

The last one listed here is an unnamed Honor handset which will feature a 5-inch 1080p display and will be powered by Huawei’s HiSilicon Kirin processor, the chip model is not listed here. There you have it folks, it seems like we’re going to see a range of Huawei-products by the end of the year, stay tuned. 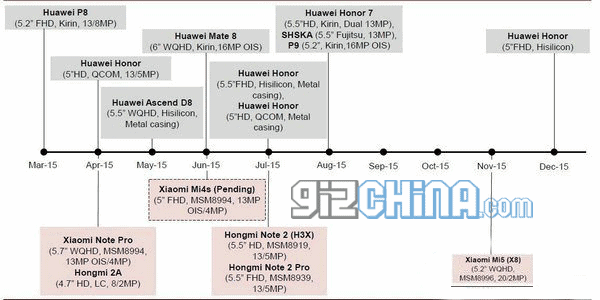