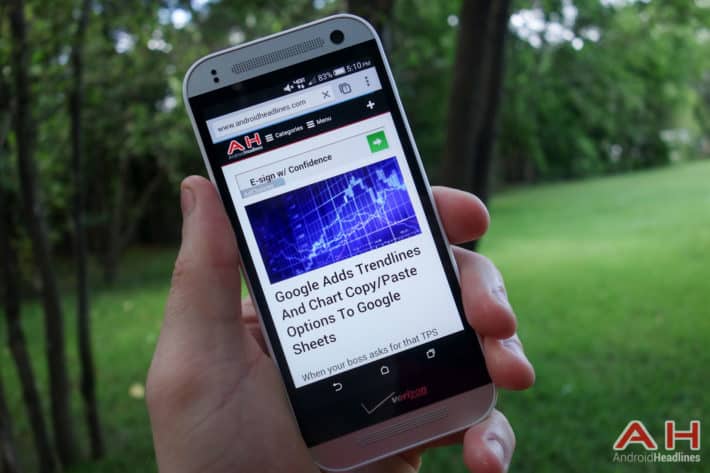 If you picked up the HTC One Mini 2 or the HTC One Remix (on Verizon) last year, well it looks like no official Lollipop for you. HTC has decided that the specs and Lollipop wouldn't provide an optimum user experience. Which is pretty important. HTC doesn't want to roll out an update that's going to leave users with a slow phone, or a buggy one. That's worse than not updating the device, and that's what's happening here. It's unfortunate, but when you buy mid-range smartphones, that's part of the way it goes.

The HTC One Mini 2 does have a Qualcomm Snapdragon 400 clocked at 1.2GHz along with 1GB of RAM, so it is pretty low end in terms of specs. However, the original Moto G has those same specs, and does have Lollipop. Playing a bit of devil's advocate here, Motorola doesn't use a skin on top of Android though. Like HTC does. HTC is looking at Android 5.0 with Sense 6 (or possibly Sense 7) which is probably the biggest difference between those two devices getting Lollipop.

It's a shame, especially since I really liked the HTC One Mini 2 (I actually reviewed the HTC One Remix, but it was the same device, just Verizon's branding on it instead) and thought that HTC did a great job with it. And it was a great phone for those that didn't want a large 5-inch device. Seeing as it was a 4.3-incher. It launched with Android 4.4 KitKat, a 720p display, and a sizable 2100mAh battery inside. It also came with a 13MP camera , which was a bit of a shock since its bigger brother, the HTC One M8 came with a 4MP UltraPixel shooter.

Since the HTC One Mini 2 won't be getting Lollipop, I think it's safe to say the One Mini won't be getting it either. Seeing as the specs are the same, but the device launched a year earlier. That's how these things go, unfortunately. After seeing Lollipop updates on a lot of devices, this might be a really good thing for those HTC One Mini 2 users out there, as Lollipop does have a lot of issues, still. While KitKat is much more stable.